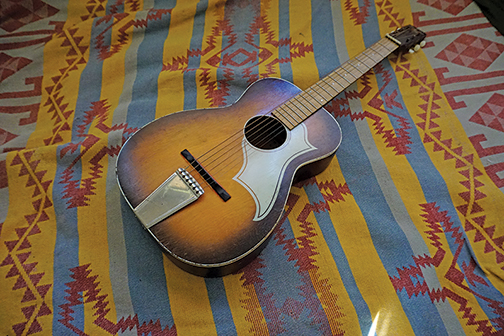 Recently a friend dropped by the shop and excitedly showed me his new guitar.  He was grinning ear to ear as he pulled it out of the case and handed it to me. The first thing I did was glance at the headstock and see the gold stamped logo of Martin, one of the oldest and most reputable guitar manufacturers in the U.S. Next I noticed the uncharacteristically bright yellow color of the top. A peek in the soundhole revealed some very roughly cut braces. Then there was the crudely carved heel of the neck, the questionable inlay work of Eric Clapton’s signature on the fretboard, the oddly shaped bridge, the thick, plasticy finish. I was looking at a counterfeit! I looked back up at my friend who said, still smiling “So what do you think?” What was I thinking? How am I going to break it to this guy that this is a total fake Martin? I sort of stammered a bit as I thought of the best way to say this, and his grin got bigger. “This is not actually a Martin,” I say, and he starts laughing. Phew. He was in on the joke. It was something he ordered online, direct from China, Martin logo and all, for a fraction of the cost of an actual Martin.

You may have seen other examples of this. In the 70s there was a small wave of Japanese guitar manufacturers making nearly identical copies of Gibson, Martin, and Fender guitars. Some of these were pretty well built guitars and are now collectible in their own right. These are generally referred to as “lawsuit guitars” as Gibson filed suit against Ibanez in 1977. They settled out of court and Ibanez changed their designs. It is notable that on these lawsuit guitars Ibanez still used their own name on the headstock, it was just the design and details they were copying. Same with the Takamine “Martin” guitars and others of that era. In a way it was less a counterfeit and more a faithful tribute, except that they were mass produced and sold in the same market and at less than half the cost. These new counterfeits like the “Martin” described above might be more concerning if they were more true to the details, but the closer one looks at them, the illusion wears away quickly. I’ve seen counterfeit Gibson Les Pauls complete with a serial number stamped in the back of the headstock along with the words “MADE IN USA.” To most people, it would appear to be a real Les Paul. It looks like a guitar, sounds like a guitar, and it’s got the name right there. But again a more careful examination reveals the many details that you just don’t find on a true Gibson made guitar.

All this leads my thoughts down a couple paths. First, it doesn’t matter what brand of guitar anybody plays. If you are making music, and you are enjoying it, then that is a success. Some of my favorite instruments that I’ve made a ton of music on have been cheap thrift store guitars. Give me a ¾ size student guitar with a broken string and rattling frets, and I can keep myself entertained for hours on end. My friend with his faux-Martin just wanted a knock around guitar that actually plays and sounds pretty good and as he said, “From stage, no one even knows the difference.” I’ve played brand new import guitars straight from the factory that play good, sound good, and only cost a couple hundred bucks. It’s hard to beat. We can obsess over details of what model of guitar we play, what the woods are, the pickups, the strings, all of it (and believe me, I do obsess about all this stuff), but in the end we just need to pick up the instrument and play. All the little details can surely make a difference, but it isn’t necessary to drop a bunch of money just to make music.

My next line of thought has me pondering the wider impact of our choices. When we buy a product made overseas, whether a guitar, new clothes, or a computer (like the one I’m typing on), there is a path that thing takes before it reaches our hands. Fuel is burned, people are laboring, money is exchanged. We live in this world with easy access to so much, and a lot of times it’s difficult to discern between the harmless and hurtful. There is a parade of containers filled with disposable stuff being shipped over here daily. In my view, musical making devices are among the more noble of those items, but there is still a cost. There’s so many options out there when looking to pick up a new instrument, and a lot of things to consider.  Does this play right? Does it sound good? Is the person who made this well fed and happy? Is this bringing music and joy into the world? Can I afford it? For me, I’ll stick to my old faithful, thrift shop beater.