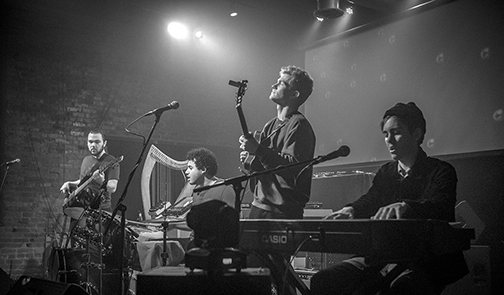 One of the greatest strengths of the Bellingham music scene is its wealth of skillful songwriters. Club Mage is one of them.

“He [Sam] and I had known each other since 8th grade and he’s a year older than me, so when he and I came up to Western and it came for me to make a band, I said ‘You should play bass for me…’” Hans recalled. “We had met through these jams at an art studio… Where we were recording weekly jam session, and he was just really good at drums.”

Club Mage may have just started off as a way for Hans to channel his arbour project into a full band project, but through practice and deliberation, they’ve definitely honed their own sound all together. While there may be remnants of hazy, warbly instrumentation a la arbour’s fantastic lo-fi beats, there is also a strong foundation of jazz, indie rock, and even R&B.

While Hans and Justus were mainly self-taught until high school, both rocking the guitar and production in equal measures, their current bassist and drummer studied as instrumentalists, and loan their intuitive and hyper-literate musical knowledge that lends the band a lot of legitimacy. Not that they’re illegitimate without them, but this elevated their sound to an obviously higher level. And despite both Hands and Justus’s knack for computer aided music, they also strive to bring as real of a sound as possible. Hans and Justus work from home, meticulously handcrafting all the overdubs and vocals themselves, while the recording of the drums and bass are usually done elsewhere.

However, even that is changing as the crew grow more comfortable together. With the release of Tides, you can hear the tape-riddled compression of their setup glue together the drum kit with the bass. The band operates under the model of writing tracks, finishing them as soon as possible, and then releasing them as singles online.

“It kind of makes sense for us. We’ve been playing these songs for so long, we’ve become so confident in the songs, and in turn it makes it easy to record it…” Justus explained.

Honestly, a lot of my favorite projects that came out recently are really short, and you can just listen to it easily. I think it’s the future of releasing music, at least in the digital realm.”

This is not to say that there isn’t an overall coherence that unites the work of Club Mage, just merely that they haven’t yet put together a full picture worth releasing as one single, physical release. As with their propensity towards working on their songwriting, collaborations, and recording process, track-listing and sequencing of an album is noted to be on the horizon. As of now, the band will continue working on singles at breakneck speeds.

Make sure to catch one of their many live performances in Bellingham, and the inevidable West Coast tour they’ll surely be embarking on. There, you’ll be able to see their intricate group-work on display, and you might even catch a choice cover or two, as seen at their Shakedown performance from late last year, around the passing of Stephen Hillenburg, where they played a few SpongeBob Squarepants songs (of which Hans also notes being a major influence to his bendy, care-free sound).

For more information, check out www.facebook.com/clubmage/.