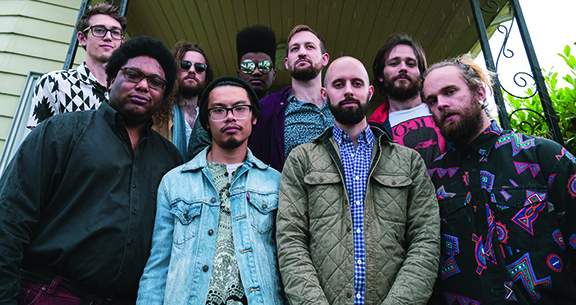 What started out as Friday night jam sessions in an old basement has turned into a 9-piece funk band from Seattle, known as High Pulp. A unique blend of backgrounds is what makes their music authentically fresh and fun. They’ve been playing since 2015 after (ex-Dog Mountain) drummer Rob Granfelt moved back to Seattle post-graduation from college in the Midwest.

“What started out as jamming in the basement turned into something we started to take more seriously, opposed to us just doing it for fun,” Rob said. “We added our sax player and kept building the band… we didn’t start playing gigs until 2017. Fresh out the gate.”

They are constantly bouncing ideas off of each other and all share a love of, well, music. Specifically, improvised instrumental music and free-flowing jam sessions that change with the addition of any new powerhouse musician. They classify their playing as “conversations” that take place on stage molding each show into a unique discussion.

Their band consists of Rob, Gehrig Uhles (guitar), Scott Rixon (bass) and Antoine Martel (keys), who all used to play together in a different band that eventually would form into High Pulp. “We used to play in this band, the original four, called New Lungs. It was partially based in Bellingham… and we used to play there all the time. It was a post-rock, indie, emo band.”

Add in Victor Nguyen and Andrew Morrill (sax) and Isaac Poole (trombone), the sound has morphed into a punchy genre that they refer to as “future funk fusion.” With curiosity about the rumored Greenwood basement where it all started, Rob said they used to set up in his old house and play downstairs, even though the keyboardist “wouldn’t bring his keyboard stand…he would just put the keyboard on the dryer. It was the cozy little spot that we would get together once a month or so, just to play on some riffs.”

The band can consist of anywhere from 7-10 members.Although their sound has shifted into a jazzier, funky vibe, the commitment from their members stays the same. They can all agree that Seattle’s music scene helped shape the band, from time spent jamming at the Royal Room in Columbia City to opening for the Polyrhythmics.

They’re currently working on playing more gigs in Bellingham and plan to be up here often, sharing the vibe with all the folks up north but also because “it’s just so beautiful up there.”

The varying musical influences are what keeps High Pulp’s music so fresh and fluctuating; there aren’t many bands making music like this right now.

“There’s a lot of jazz influence, a lot of hip-hop and funk influence. We all come from a DIY background and I think punk rock is a big influence for all of us.”

Some of the members come from traditional, collegiate musical training and others learned by simply picking up an instrument and trying it out. From classical composers to local talent to jazz legends, the contrasting influences shine through in their quick key changes and distinct tempos. Most of their songs carry a fast, upbeat attitude while other songs hang in a more relaxed, down-tempo vibe. Regardless, the individuality of each player is what solidifies the band’s ability to provide a good time that always requires grooving.