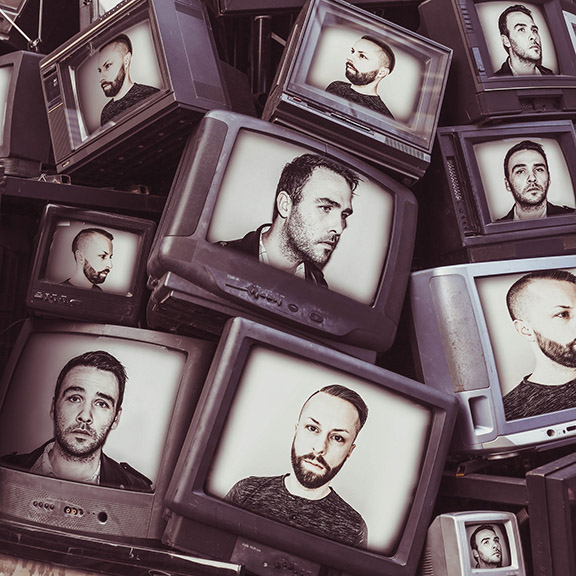 It’s been seven years since Idiot Pilot officially broke up and 12 years since their last album, but Bellingham’s Michael Harris and Daniel Anderson are back. The talented duo – who signed to a major label while in their teens, toured the world, recorded with Ross Robinson, and broke up by their mid-20s – have returned with an incredible new album, Blue Blood. Recorded at Daniel’s home in Los Angeles, the music shows a new spirit in the band, rekindling a friendship and musical partnership that had gone dormant.

The reconnection of Idiot Pilot began innocently enough with a message from Daniel to Michael a few years back. They started contacting each other after not speaking for four years following the band’s break-up. “Daniel reached out via email over the holidays a few years back, and from there an innocent enough question was posed, ‘How would you like to come down to Los Angeles and just work on some tunes? See how it goes?’” Michael said.

Michael went down to LA and the two began to work at Daniel’s studio space. Initially, the songs stemmed from Daniel who had songs fairly developed, but they didn’t work for his current project Glowbug. Michael added parts and the collaboration had begun. “I spruced them up a bit in the studio and sent them over to him,” Daniel shared, adding, “I said ‘We should do this again.’”

And they did. “Essentially it was just a matter of taking week-long trips every four to six months on average, over the last few years, to begin assembling a barrage of tunes,” Michael said. “Daniel and I, when together, have always worked incredibly fast and efficiently, with little time wasted.”

But what was actually happening between the two, musically, was still up in the air. During an early session, one of them said, “I guess this is a band, should we come up with a band name?” Daniel stated it took half a year before they realized it was an Idiot Pilot record.

As the two continued to work, they discovered a new freedom in writing that came with time and age. “Now that we are theoretically older and wiser, we felt more freedom to explore and implement different strategies in the creation process,” Michael said. “We built songs together from the ground up, we took random riffs recorded in minute long clips from my iPhone and explored where they could go, and of course we used tracks Daniel already had in the can. We even went as far as taking a singular section from a previous demo, and completely remaking the song by turning that one section into an entirely different theme for a track (coincidentally, my favorite from the album, entitled “Sideways”).”

He continued, “Daniel and I work together seamlessly, and we typically leave no stone unturned, no idea left unexplored, but always with the intention of arriving at a beautiful compromise that satisfies both parties. The chemistry has always been strong, and it’s so exciting to be back at it, showcasing that despite time passing, we still have something to contribute to the music world, and to each other.”

Once the album was finished – they paired down their 18 or so songs to 12 completed and all the artwork – it was time to announce the new music. The musical and social media climate was very different than 12 years ago and they weren’t sure what to expect. “I didn’t really know if anyone was gonna notice the Idiot Pilot record,” Daniel stated. “But, what I didn’t consider, was the fans that we do have really love Idiot Pilot and they’re excited enough to share things and tell their friends.”

Michael added, “I am immensely grateful that people have waited so patiently, and have expressed so much gratitude and excitement over the reunion. It’s very much so a validation that we had something special to begin with, and we will use that momentum and excitement to continue creating for the fans.”

Now in their 30s, Idiot Pilot doesn’t have any desire to tour (other than the occasional show or short run), but are excited to see what they create. “It’s never been about anything but making the best possible music we can, and sharing it with people in the hopes of making them feel something tangible, and relatable while still pushing stylistic boundaries,” Michael shared. “This third record represents a homecoming, and a return to form for us. Picking up right where we left off.”

For updates about Idiot Pilot, follow their social media or visit www.idiotpilotmusic.com.