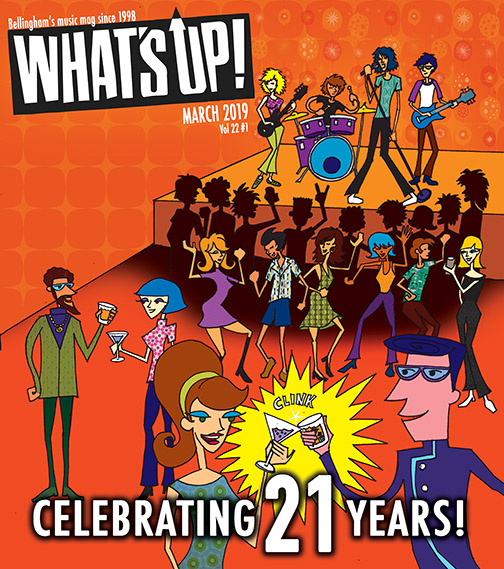 How are you all doing these days? I hope all is well. You’re reading the mag’s 224th issue, celebrating 21 years of publishing What’s Up!

21 years… I can’t fathom it, I know I probably say this every year, but seriously I can’t even begin to grasp the idea that if you were born the day the first issue came out, you can now legally drink in the bars. NOT JUST IN CANADA!

Through all the ups and downs, I can say without hesitation that I’m glad I stuck with the magazine. Watching all the small bands play and grow as musicians, grow as people – starting families, have careers in and out of music. Live life – it’s been a wonderful journey to be part of it… I was always a fan of our local music scene, I never really had any huge career aspirations, just to be part of this thing that I’ve loved. I’ve been drawn to the idea of a music scene since I was in my teens watching the Seattle scene grow (slowly at first) and later explode. It’s all I’ve ever wanted.

Which, of course, makes this is a bitter sweet birthday as it’ll be my last with the magazine. The time has come for a new challenge – even though I don’t necessarily want to leave this music scene, I’m forcing a change to see what’s next.

And what is happening with the magazine? As of press time, I have no idea. There are a couple of interested parties in What’s Up!, but things are moving slowly and June is coming up quick. We’re also exploring another option and if that comes to fruition, What’s Up! will continue to live on (without me running the day to day). We shall see – my sincere hope is that next issue I will finally have a concrete answer to the mag’s future. Could live on, could end… who knows.

But for today, I’m thankful – thankful the magazine has been supported by advertisers and readers over the last 21 years. Thankful for all the incredible music and people I’ve been able to be part of, report on and enjoy. Thankful for the COUNTLESS people who have helped as contributors over the years, thankful to Sean Spain and Amy Marchegiani for getting this going and being part of things early on. Most importantly, I’m thankful to my wife Becca who puts up with me each month, then puts issues together last minute.

Welp, this sounds like a farewell, but we’re not there yet. Three issues left during my reign of terror, so I’ll get even more mushy. Might even have a few tears hit the keyboard, who knows, we’ll see. In the mean time, we celebrate with the magazine’s 21st birthday local music bar crawl! Seven nights of free shows, all to celebrate the mag’s birthday! Things kick off Monday night, March 4 at Red Rum with Stereo Donkey (which includes Hiro Yamamoto, the original bass player of Soundgarden) and Maneken Hand. Tuesday is some local jazz with Wonderhouse at the Honey Moon. Wednesday is at The Firefly with the oddest line up I can imagine – Flais, Porch Cat, Apology Wars and The Collectors. Thursday things get weird with Earth Years and The Sheen at Caps. Friday night will be a bit bonkers with Hello, I’m Sorry, Glitchlette, LipStitch and The Beautiful Freaks at The Shakedown. Saturday at the Wild Buffalo brings us Baby Cakes getting sexy, with Mr. Feelgood and the Firm Believers and Arbour. We wrap it all up Sunday around brunch at The Cabin with Sarah Goodin, I Love You Avalanche, Devin Champlin and guests! As I said, IT’S ALL FREEEEEEEE. So, come down and say hello!

Just as we’re headed to press, a major, major, major show is being announced! Death Cab for Cutie and Odesza will be making their way back up to Bellingham on May 18 at Civic Stadium! First time I saw them was their first bar show at the 3B… Now Civic Stadium, that’s pretty damn cool! Local band LipStitch will be opening the show.

As you’ll see in this month’s Tales of the Road, The Co Founder played Japan last month. They had a great but incredibly hectic tour with 10 dates in 11 days (though they had plenty of great food, including, I’ve been told, the best fried chicken ever at a 7-11). Unfortunately, Nikko Van Wyck has left the band and Luke Hogfoss won’t be as active in their touring schedule (which includes hitting the road in most of March around SxSW dates). As of press time, Hayden Eller is looking for a bass player to hit the road this month, so if you’re interested, reach out to him. Hayden is going to be on the road with Californians, Lawn Chairs, this summer as a third guitarist. Dude loves to live on the road, I dig it.

Vervex’s new album, On Moon Island, is being released on April 16. Jake Barrow (who doubles as the drummer for The Co Founder) gave me a sneak peak and the sound is beautifulllll indie pop. Jake will then be hitting the road (as if he hasn’t been on the road enough already) from late April through early July, taking him all over the U.S.

Side note, when the magazine began, we would feature bands who went on tour to really highlight what they were doing. We wanted bands to tour as much as possible but it rarely happened. Now, touring is commonplace and I love reporting on it.

Stone Jones will be releasing a new album on April 20 with a release show at the Waterfront. Then, he’s taking the show on the road to Santa Cruz and back again. New album + tour = magic.

Hot Damn Scandal are another band on the road and they are ALL OVER the place. Judging by their tour poster they’ll be hitting all corners of the US. Another great band hitting the road and in part because they tour.

Have you listened to Mount Saturn’s album, Kiss the Ring, yet? OH SO DAMN GOOD! If you dig some riffs, like BIG RIFFS, then you’ll dig the record. Hopefully they’ll get back to playing live shows soon.

Have you checked out Cameo Artist by The Beautiful Freaks yet? You can read more about the band in the local spotlight section, but I really dig the band. Apparently, so does KEXP as they’ll be on the station on April 27, so listen up!

Mr. A. Guest is back in the studio with a follow up to his debut EP. No release date, but it’s now on your radar.

Supermissive spent three days in Anacortes at Unknown Recording Studio, working on the follow of Trash is King. SUCH A GOOD band.

Jortress has released a new album and it’s weirdddddd. Drum machine, dark weirdness in all its glory. They almost sound like a fun mix of Jesus and Mary Chain and early Ministry.

Laughingstock have put out a new EP, Aiken Muller’s Day Off. The band flies a bit under the radar here at the mag but that’ll probably stop soon – lots and lots of fans in the music scene – maybe you’ll be one too?

Saganist are painfully close to having a completed record – word from Andy is the album just needs to be mastered. As of press time, I’ll be listening to some of it tomorrow. Does that help ya? No, not really, but I’m pretty stoked to hear it. I wonder when the new No Guts album will hit the streets?

I love how hard Aphids works – they’ve released another new album, which works. They’ve released a couple records over the last year, what have you done? Oh yeah – hard work doesn’t mean anything if you suck… and this band does.not.suck!

Frank N Stein (in the former NY Pizza spot on State Street) has opened up and, as of press time, just finished a stage! Not sure exactly what’s going to be on that stage, but I’ve heard of comedy and some music happening there – stay tuned for more details.

I just found out Luigi’s Mansion was shut down awhile ago – I liked what they were doing on the house show scene and was disappointed to hear it was no more.

Noah Burns (ex-Wild Throne) has joined up with Melancholia, which sounds pretty damn intense. Noah is just such a damn good drummer, glad to see him playing in the new band.

There’s a new place for bands to practice. Subdued Studios, located on Bennett off of Bakerview, has been in the works for YEARS. I’m stoked Kevin and Jeremy have opened. Prices are great, check out www.subduedstudios.com for more info.

Well, I think that’s about it for this month. Hope you enjoy the mag – we heart you all for reading it.

P.S. We have a fun prize for the first reader who can correctly connect all the headlines in this month’s issue (hint: they’re in a song)! Send your answer to brent@whatsup-magazine.com.