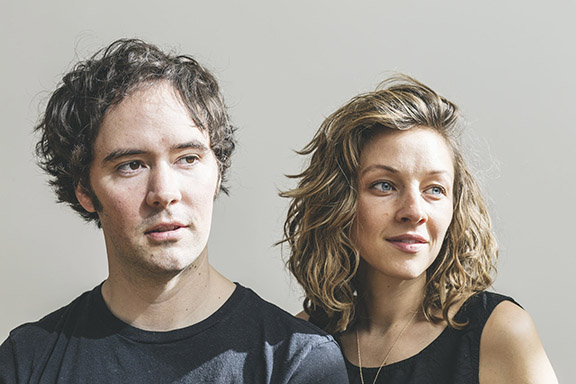 Mandolin Orange released their latest work, Tides of a Teardrop, early last month. Not unlike many of their prior songs and albums, this work offers a sentimental tale of loss, love, grief and acceptance.

When I spoke with Emily Frantz (vocals, violin, guitar) a couple of weeks ago she said much of the album, which her partner, Andrew Marlin (vocals, mandolin, guitar, banjo), wrote, and how it follows the story of his mother’s passing when he was in his late teens.

Marlin had been somewhat hesitant about sharing this story on the album and for audiences, Frantz said, but ultimately decided it was time, it had to be done.

“I think the big intention for this album was for him to process things he hadn’t processed yet,” she said. “He held it off for a long time because he maybe didn’t feel it was important enough for an album or because he didn’t want to seem whiny on the mic.”

What they’ve realized in the weeks following Tides of a Teardrop’s release is that the sentiments expressed in the songs are universal and have been well received by fans and critics. It’s true that all of us hurt, and listening to the empathetic crooning Americana/folk-pop harmonies of Frantz and Marlin is ever so soothing.

“I think our songs have a sad sound to them no matter what we do. But, I think that so many of our records in the past have been about heartbreak, and emotional agony, or death and dealing with loss and grieving. Even if a lot of the songs have kind of a sad sound, to us, this record is a lot more about appreciating things, as opposed to [grieving],” Frantz said in a July 2015 interview with Pop Matters writer Sachin Mital.

Marlin has always had an affinity for writing music that hits close to home. There’s something deeply emotional in his lyrics, which may be best attributed to his natural, stream of consciousness writing style that he’s maintained so well over the years.

It’s a little bit like if he can just get the opening line of the song then the rest of the song is there for him. That’s the hardest part – the beginning. It all unfolds after that, Frantz said. Like many storytellers across all writing forms, Marlin usually has an outline for what he wants it to sound like and he lets it all flow and unfold subconsciously and then goes back and edits to make sure each word is doing exactly what he wants it to.

The duo met in Chapel Hill, N.C. on the night of Obama’s first inauguration. And though the political climate has changed rather dramatically from that time, the sounds born of their meeting that night have remained steady. In addition to the six albums they’ve released since 2010, the two had a baby girl late last year and, yes, she will be touring with them.

Frantz had been playing music for decades, but never dreamt of making a career of it. Marlin, on the other hand, had always had his sights set on making music a full-time job, Frantz said. The two signed with the independent record label, Yep Roc, in 2013 and produced all of their last four albums under the label. They had been somewhat hesitant to signing, but Yep Roc’s offices are located just 15 minutes up the road from where Marlin and Frantz live, allowing the relationship to feel much more intimate due simply to the proximity, Frantz said.

With the help of the music communities in The Triangle, North Carolina’s major university cities of Chapel Hill, Durham and Raleigh, Mandolin Orange has prospered locally and, with time, nationally.

“There’s a ton of awesome music fans here in The Triangle,” Frantz said. “It’s a lot of people who love seeing local bands and national touring bands that are based here. There’s also tons of diversity in the kind of music people are playing in the area and that helps bring everyone up.”

Marlin and Frantz have toured extensively throughout the U.S., as well as Europe. They’ve appeared at the Telluride Bluegrass Festival, Bonnaroo and Pickathon. Most recently they’ve added a bassist, drums and electric guitar element to their duet, where these additional musicians were chosen with the intention of adding musical depth while leaving open space in the music and allowing them to stay true to their duet identity, Frantz said.

“…We worked hard at getting our legs as a duo before we decided to get a band going, and we definitely wanted people who were intuitive and who would enhance our sound,” Frantz said in an August 2018 interview with Westword’s Nick Hutchinson.

This change, if indicative of nothing else, shows that Mandolin Orange has a lot of life left in them. From their humble inauguration night beginning to playing in front of thousands with a backing band, and now, to having both a new baby and album, this band will prove time and time again that their personal charm and intimate music will continue to carry them.

Mandolin Orange performs at the Mount Baker Theatre on Friday, March 9. For more information about the band, visit www.mandolinorange.com. Follow their social media pages for updates.