The Co Founder: Those were the days 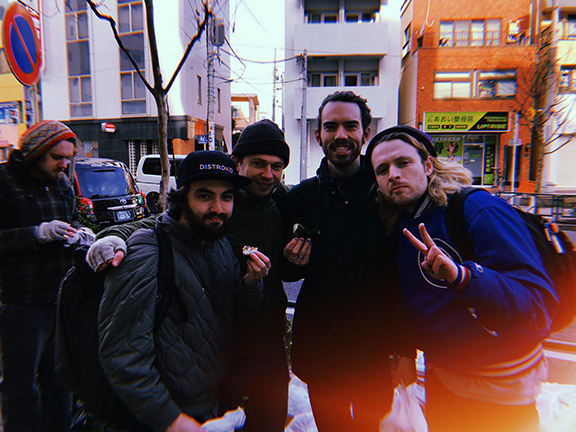 I don’t even know where to start with this one. The entirety of this trip was so overwhelming and life changing, it’s hard for me to quantify it all into a single article – I could write a book based on this trip. The short story: Japan was incredible. The people, the culture, the food, the venues, the staff at the venues…everything about it, there is no sum of words I can use to express how great of a place it was to visit and perform.

We ended up on this tour after a good year of planning, and it took so many moving parts to make it happen. I want to start this out with a huge thank you to Popiya, our Japanese friends who came to the states last August to tour, and really helped solidify our final plans and booking ends for our recent trip. Genki, Rey, Mari, and Yu are all some of the most solid people I’ve ever met, and made this entire cultural exchange something that I absolutely need to do more of in the future. It was really hard to say goodbye to them, but I know our paths will cross again soon!

I also need to give a huge shout out to Adam Smith, our homie from New Mexico, who helped Hayden navigate booking a tour across the world. Without his knowledge and experience, there’s no way we could have made it happen. There was more than one “Kampai” (Cheers) to him on the road, and every place we went to seemed to have friends that have fond memories of his time there.

Erik Wallace also helped us immensely, and wrote a really awesome email to us about what to expect, how to act in certain situations, and how to get around. His words of encouragement helped put us all at ease right before the trip, and made such a huge difference in our lives once we landed.

Last but not least, I owe a huge thanks to Hayden Eller, whom without his sheer determination and lack of compromise, this trip would not have happened. Because of his willpower, he helped make a dream of mine come true, and I don’t think I’ll ever be able to repay that debt, nor will I ever forget it.

Now, I’ve never toured internationally, and there are absolutely huge cultural differences that left us lost in translation several times. At the time, some of these felt extremely frustrating, but with the benefit of hindsight, it only helped us grow as people and as professional musicians. The biggest, jarring moment we had came when we had tried to cancel a show we booked last minute.

There is absolutely no cancelling shows, at last gathering from the experiences we went through. We bit off a bit more than we could chew, to the point where Hayden completely lost his voice and he couldn’t even whisper. We added a couple shows while we were there to fill our off days, and with Hayden’s voice completely shot (I’ve never heard someone with a voice that mangled, sorry that happened to you man), we thought it would be okay to back out of one of the shows we had added last minute. We had called the venue, only to have them ask us if we were basically dead. “We’re not, it’s just Hayden has no voice”, we told them. They then asked “Well, you can play your instruments right?”

“Yeah, we can play our instruments.”

“Awesome, then we look forward to seeing you here.”

And that was that, it felt like we had gotten in line with the Yakuza or something. They really don’t f*#$ around there. This is all coming from the professionalism I witnessed while over there. It seems like you either do or you don’t, there’s no in-between, and that’s where the bar is set.

The other moment I had that left me a little frustrated was the seemingly difficult task of getting water when eating out. In Japan, you don’t tip, it’s not part of the culture, so most restaurants have seating fees that apply the moment you sit down, and require a 1-2 drink minimum. Note: they don’t charge for water, at all, and some places don’t even give out water to curb this.

More than once, all I wanted was a cold glass of water, and more than once, I was told “No water, only beer.” The other drinking exchange I had to deal with was turning town bartenders who wanted to drink with me. I could see the disappointment when I politely declined, and I was definitely toeing the line of being rude in this aspect, but, fact of the matter is, I’m not a big drinker, and I definitely can’t keep up with drinking culture in Japan.

Outside of these hiccups of cultural exchanges, everything else also taught me so much about being a professional musician. The shows were incredible. Each show came with a full sound check, incredible backlined gear, and the engineers were the best I have ever had the pleasure of working with. The attention to detail was second to none, and it was the first time I can ever remember having perfect sound night in and night out.

The musicians themselves were incredible too. I’ve never played a string of shows where I was absolutely floored by each band we were performing with. More than once, I bought a piece of merch from every band we played with. It’s been a huge challenge learning how to setup my iPhone so that I can search for Japanese bands in Japanese characters online, but hot damn, I need to have this music available at the press of my finger.

My favorite show on this entire trip happened at my new favorite venue in the world: Basement Bar. Tucked away in the quieter neighborhood of Shimokitazawa, Basement Bar is an indie rockers heaven. It was a Monday night, and we were all pretty tired from walking around all day with 30-40 pounds of gear each. Whenever I perform on Monday nights, I don’t expect much, I’m mostly just happy to get the opportunity to play. It can be hard to draw a crowd on a Monday, in our hometown or otherwise, as people are transitioning out of the weekend and settling in for the work week. This show was an exception. The place was absolutely packed!

We also got to share the stage with one of my new favorite bands, Salsa. These guys rip, and have toured the states a few times. Take the intricacies of Toe, the pop sense of Dirty Projectors, and the insane drumming from Hella, and you have Salsa – a high energy group that knows the fine line between math and pop rock.

All in all, I’m really hoping that I can make a trip back here sooner than later, and highly recommend anyone, musician or not, to spend some time in Tokyo. You get humbled really quickly being in a city with 40 million other people, and the experiences I brought home from Japan are something I’ll look back on fondly, and continue to grow from for years to come.

Follow The Co Founder on social email for updates.