The Dip: Ready to throw a craze 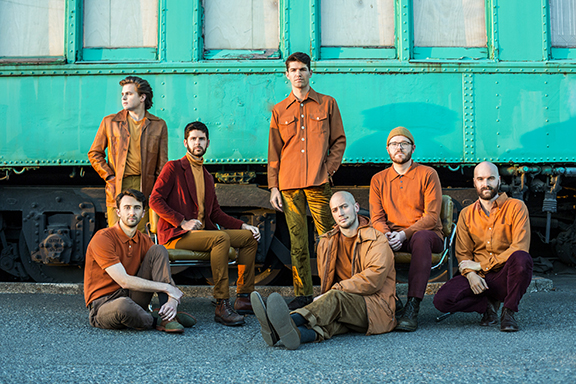 Sandwiched between an Ethiopian restaurant and a work-in-progress doggie daycare in Seattle’s Central District is a modest, unmarked building adorned by chipped paint, rotting wood and metal bars over the windows. It may have been a barbershop in a past life, a clothing store, and possibly a bodega too, but for the last three years it’s been home to the unofficially titled but commonly called Mustard Studios.

The Dip practices here, and took the unusual name for the space from a mustard-colored sofa they found there when they first moved in. It’s a warmly lit and comfortable looking environment the band outfitted with drywall and soundproof material DIY style to prevent any noise complaints from the neighbors, which they’ve received none of thus far.

“The studio is a great place to go everyday because it makes making music feel like a fun job,” Mark Hunter (bassist), said in a recent interview. “We spend a lot of time there playing and experimenting. It’s a good resource to have.”

Most of the members of this septet (yes, seven) grew up in or around the Pacific Northwest, with just two being from out of state. They came together in 2015 while living in the University District, where Hunter, Jarred Katz (drums), and Tom Eddy (vocals, guitar) had been living and subsequently hosting barbecues in their backyard complete with jam sessions going well into the night. It just so happened that a group called The Honeynut Horns, composed of Brennan Carter (trumpet), Evan Smith (baritone saxophone), and Levi Gillis (tenor saxophone), lived across the street and were often heard playing jazz on their balcony. One thing led to the next, connections were made, and with the addition of Jacob Lundgren (guitar), The Dip was formed by these neighbors.

That was 2012 and progress for this band has been steady since. They’ve sold out shows on the East Coast, played high-attendance festivals such as Sasquatch!, and shared stages with The California Honeydrops and The Dirty Dozen Brass Band. Early last month The Dip released their sophomore album, The Dip Delivers, a satisfying collection of songs where their jazz, classical, blues, rock and R&B influences come together in a warm, inviting and groove-worthy work of both cool jam and contemplative order.

Putting out this album was a big deal for the band, Hunter explained. It took nearly three years to complete from recording some of the first songs in a remote Skykomish cabin in 2016, to the final product mixed and produced at none other than their very own Mustard Studio.

“We had been ready to release this album and now that it’s out we hope to get some new bookings, start heading to festivals and planning new tours,” Hunter said.

Producing anything under the influence of seven musicians is a feat in and of itself, but somehow The Dip seems to have figured it out. Creating a song together starts by someone bringing forth an idea or concept or even a fully flushed out demo for everyone to add to, Hunter said. From there, it’s a mixture of intuitive sense and making small organizational changes to get a song to fruition.

“Sometimes you have to sacrifice your idea and it can be hard not to take it personally but it’s important to each of us that we get to explain our thoughts or ideas or opinions and be allowed to come up with an alternative if possible,” Hunter said.

Their two previous albums, a self-titled LP followed by an EP, Won’t Be Coming Back, did a fair job of setting them apart from the dominant indie rock, folk and pop bands circling around the Seattle scene. The Dip offers a modern and soulful take on music that could otherwise belong in a Chelsea speakeasy or a French Quarter dive.

And while their sound might be better suited for something to the south or east of the Pacific Northwest, The Dip has every intention of staying in Seattle, Hunter said.

Organizing tours, however, is a top priority. They travel in a Ford Transit Van and typically stay at hotels, with family or friends abroad. It’s not always easy finding accommodations and making cross-country treks with seven or more people on board, but The Dip does it and they do it well. Plus, they know that in the end they will eventually return to their modest and comfortable Mustard Studio.

See The Dip play Wild Buffalo on Friday, March 29. For more information about the band, follow their social media.