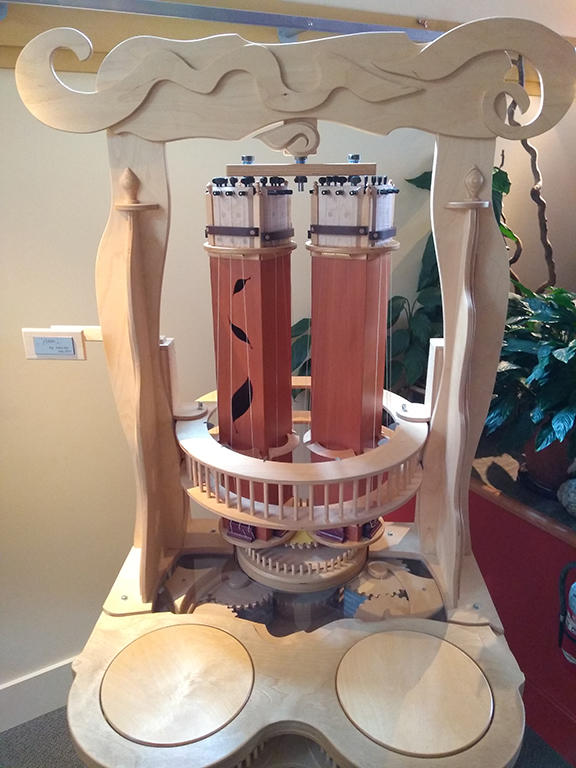 Three thirty in the morning. I awake with a start and proclaim into the darkness, “Allella is the middle of the word parallelogram!” Satisfied, I fall back into a deep sleep, only to realize the next morning, that the spelling doesn’t quite add up. Allella is a palindrome, a word that is spelled the same way forward and back, and it does at least sound like the middle syllables of parallelogram. What the hell am I talking about? What’s this all supposed to mean? What is Allella?

It started at Mindport, which sits on Holly Street, just across the alley from the Wild Buffalo. If you haven’t ever been, or have wandered by the window and wondered what goes on in there, I highly recommend a visit soon. Two large rooms are filled with interactive exhibits that are playful, educational, inspiring, and just plain trippy. It’s still only a measly three bucks to enter, and one could easily spend an hour or three getting lost in the creative madness. Among the many exhibits there’s the Sonoluce where you can watch a light show based on the sounds you make, the backwards speech machine, the magnetically altered Rhythmo, and then there’s the aforementioned Allella. Like lots of the contraptions at Mindport, Allella is sort of hard to describe, but I’ll try here. Picture two vertical columns, each with four sides, and each side with three strings tuned to a particular pitch. Each column rotates on its own axis, and also orbits around a wider circle. The spinning is all controlled by hand with two large, flat discs that somewhat resemble a DJ’s turntable rig. As the columns spins around, the strings get plucked by guitar picks which are mounted in a circle surrounding the whole thing. Sound confusing? When you step in front of it, the objective is clear… make some music. And the pathway to that music is surprisingly simple… start spinning the discs, and the rest falls into place as you hear a magical cascade of tone. Unless the thing is out of tune. And that’s how I entered this story.

The folks at Mindport got ahold of me a couple months ago with hopes I could help devise a better method to tune Allella. The designer and builder, John Ito, did an incredible job with all the complicated joinery, wooden gears, and precision machining to make Allella a reality. But the one spot lacking was the tuning pegs. They were based on a simple friction peg design, and although they had been doing the trick for a number of years, over time they were losing grip and trying to tune the instrument to a pleasing scale became near impossible.

Unfortunately, Allella had devolved into a really beautiful noise maker. After consulting with some of the staff at Mindport, and some email communication with John (he’s out of state now), I came up with a plan. It took some trial and error, but eventually I was able to install some shop made maple plates to Allella that held four complete sets of precision classical guitar tuning machines. With all the moving parts, there wasn’t a lot of room to get everything to fit, so I was really glad when I brought my final design down there and found that everything fit and worked, with barely ¼ inch clearance in some spots. After a whole lot of string stretching, I tuned Allella to what I thought to be a pleasing scale, and then started to play. Best of all, Tallie, one of the staff members at Mindport brought down her cello, and so we played briefly, a cello Allella duet.

I never did find out the origin of the name, but I’m guessing that parallelograms weren’t a part of it. But what do I know, I’m no geometerist. For further info you can check out mindport.org or better yet, head on down to 210 W Holly St, plop down your three bucks, and find out for yourself!