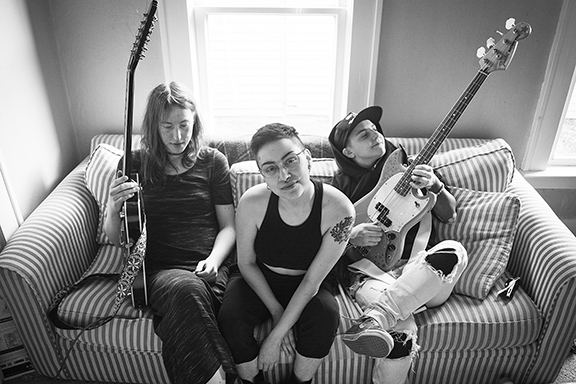 The major element that separates a serious artist from a casual one is dedication to their craft. Porch Cat is one of those artists who has just been on the grind from the very start to share their message and music with other like minded individuals. Through great perseverance and personal strength, the band has been putting out spellbinding music for nearly 10 years.

The project started when lead songwriter Chan Barraza picked up guitar at the age of 12. Soon, Chan decided to combine their love for the guitar with their love for the written word, and thus the project began in its primordial stage. While there were many songs written and claws sharped at the doors of time, it wasn’t until entering college that Chan decided to start recording and releasing their music under a singular entity: Porch Cat.

The name is derived from Chan’s own fascination with felines, and also because of its befitting name. Porch Cat provides all the same senses of comfort and warmth that a cat does, while also having the ability to scratch our eyes out in a second’s notice. It has also seemed to work as sort of a lighting rod for other animal-themed bands to join along in, which has served as a premise for almost too many shows to count at this point.

The sound of the band itself is also just as playful as a cat. While early on it oscillated between high-energy, pop-punk flavored waltz to morose balladry, in its modern incarnation, Porch Cat can strike from seemingly anywhere. It can flash a menacing grin of scathing folk-punk angst, to a slinky bass-line riddled trudge through emotional bogs, to on their most recent record, a splash of reverb a la 90s garage rock. This could be unwieldy for most bands, but with the careful and clever songwriting practices of both of its core members, it comes off more as a celebration of musical variety, rather than a garish cavalcade of instrumentation.

Part of this expanded sound is due to the addition of Western student Emily Ayden, who brought in the influences of power-pop, art rock and electronica that define Porch Cat’s current sound. Emily is a powerful enough singer-songwriter in her own right, having spearheaded the project The Fire Organ. In combination with Chan’s own skills, the band is a deadly duo of painfully emotional lyrics.

In addition to the two lovely and sonorous voices of Chan and Emily, the lyrics are one of the most beautiful aspects of Porch Cat. Anyone who has listened to their stuff hears themes of chronic pain, trauma, abuse, societal structures, and the way that the band talks about these problems truly help demystify them. They help bring comfort to those who are going through similar things, and give them the sense of strength that any good songwriter should. Interestingly enough these lyrics come from Chan finding a progression that sounds good and then spitting the subconscious lines onto paper until a coherent story comes out of them.

Though this process is apt to change, as the scope of the project changes. Sometimes Emily will contribute lyrical choices, or suggest instrumentation options, and nowadays Chan will start the songs off with a bassline instead of chords, thus opening up Emily to tint the musical foundation with different shades of harmonization. Other times there are a bevy of other musicians around who will give the album a more folksy or punk energy, depending on who is available at the time.

Currently they are teamed up with drummer Kaitlyn to bring on a full-band attack to their next live show, whose dates are currently tentative, but likely to start back up at any minute. Regardless of the next time to play, there is a wealth of incredibly emotionally resonant albums to listen to by Porch Cat and their associated bands, and it would be a disservice to the greatness of the local music scene to not check them out.

Stay up to date with Porch Cat by following their Facebook page and listen in at https://soundcloud.com/porchcat or http://porchcat.bandcamp.com.