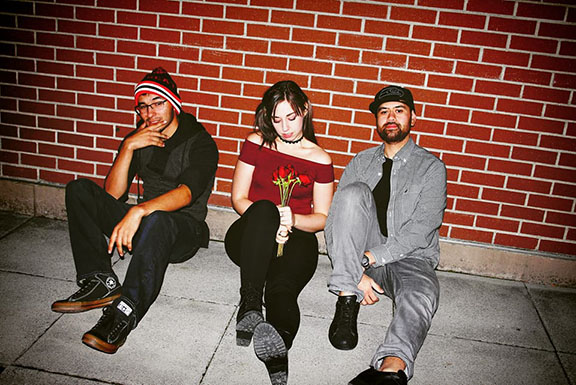 For Beverly Rodenberg, living life without music is like trying to breathe without oxygen. Rodenberg can be described as a music catalyst – a piano teacher by day and the front woman for Rose’s Thorn by night.

Taking passion and the skills from teaching, she inspires not just her students but also her fellow bandmates. The grunge-pop, alt-rock band Rose’s Thorn is made up of three forces: Rodenberg, Tim Greencorn (bass), and Matthew Esquivel (drums).

The three come together three times a week to experiment with different sounds and produce melodic foundations for their lyrics. Their sound has an interesting variety, ranging from dark and grungy to poppy. No matter what, the bass and drums maintain a beat that is easy to jump around to. Rodenberg’s voice is beautifully powerful and present.

Each song acts as a journal entry out of Rodenberg’s diary, telling unfiltered and deeply personal stories. Some of the topics are heartbreak, friendship fights, anxiety, coming to terms with mental health, and self-acceptance.

This project has taught the trio how to be better musicians, and also brought them out of their comfort zones—on stage and with production. Before Rose’s Thorn, Greencorn was a DJ. Rodenberg influenced him to try playing an instrument. Greencorn learned how to play the bass with a lot of practice, inspiration from Rodenberg, and using his previous knowledge of rhythm from his DJ days.

Being in the band has also helped Esquivel grow as a drummer. He started with percussion in middle school and high school followed by a year of lessons. Being in a band helped him learn to create something outside of sheet music and collaborate with like-minded artists.

What truly makes Rose’s Thorn special to Rodenberg, Greencorn, and Esquivel is the fact they have grown as people and musicians the last couple years. The group performed 25 shows last year, including opening at the Wild Buffalo for Keaton Collective’s final show. Pushing themselves to be on stage more than they ever have before really helped break down the barriers that insecurity creates.

“I used to be very nervous to be on stage and put myself out there. The more we play and the more I write, I am more comfortable with who I am. I accept myself as I am,” Rodenberg said. “I don’t give a f#!@ anymore if other people don’t accept me.”

This band has become a way for three people to self-express, to try new things together, to learn more about themselves, to discover their values, and to find their chosen family.

It’s safe to say that the three are in a great place with their music right now. However, they are nowhere near stopping. Rose’s Thorn has been brewing up fresh material and badass lyrics for their new EP, The Chosen One.

“The EP really shows the different styles that we have. Each song is individual and has its own vibe,” Greencorn said. “What I really appreciate about Beverly’s writing is that each song tells a different story. The EP is a journey.”

The Chosen One can be experienced up close and personal at their EP release show on June 15 at the Shakedown. The group has put together an especially exciting night for celebrating their release show. They have crafted a lineup that gives other fantastic female fronted bands recognition, including performances from LipStitch and Organized Grime.

Rose’s Thorn is available to listen to on Facebook, Spotify, and Bandcamp. Check out their website at www.rosesthorn.com. Catch their album release on June 15 at The Shakedown with LipStitch and Organized Grime.