Akrasia: It doesn’t get louder than this 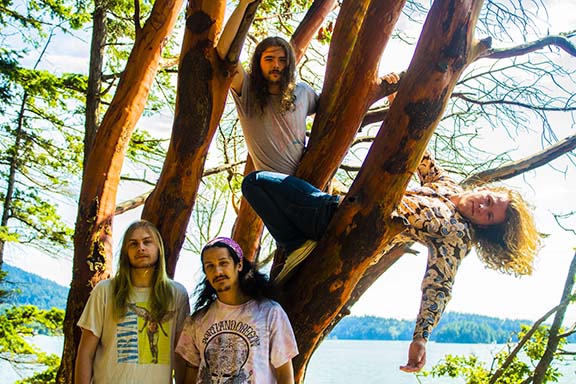 Since the late 60s bands like Blue Cheer, Led Zeppelin and Motorhead made a leap in pushing the boundaries of amplification, reaching decibels and frequencies that were previously unheard. Bellingham’s Akrasia continue this almost ritualistic style of playing so loud your ears ring through to the next night.

“We played a show at the Monster House [a house show venue] with Beautiful Freaks but we were too loud, so much that the cops were called on them for the first time in five years,” lead guitarist Rylan Hislop said. “It was a bummer we couldn’t finish our set but it’s impressive with how loud we are becoming.”

Their musical soundscape creates an apocalyptic reality with barren wastelands and a fallen society, a world that isn’t too hard for them to imagine in regards to our planet’s ongoing environmental and political crisis.

Despite their malevolent lyrics and evil riffs, Akrasia’s live shows are filled with smiling faces, flying hair and dancing bodies. According to the all of the band’s members, a crowd that finds joy out of overcoming the darker subjects of life through the power of music is the kind of positive landscape they hope to promote within the scene.

Other than Black Sabbath [being the obvious pick] the band listed acts such as Sleep, The Grateful Dead, Soundgarden, Danzig and the instrumental dynamics of the Foo Fighters.

Akrasia made their introduction to the Bellingham music scene close to five years ago when Hislop, drummer Owen Sheets and then bassist Jesse Lonchar formed the band with former singer Spencer Rock. According to Hislop and, Rock’s departure was due to differences in “worldviews and the band’s creative direction.”

The addition of new lead singer Jacob Kerst and the April 24, release of their debut album Deer in the City of this year, the band have been catapulted to a caliber of songwriting, that has put them on the same field as fellow Bellingham doom metal bands Dryland and Supermisisve.

Connecting with Kerst proved to be a smoother process than the rest of the band previously anticipated. “I was worried that if we have to kick a singer out then one of us would have to sing,” Hislop said. A task that none of the band was ready to take on.

When Kerst posted on the Bellingham House Shows Facebook page on April 22, 2018, offering his talents as singer who was dedicated to playing rock & roll, with a love for the heavier side of music, Hislop recalled thinking they had found the missing piece to their band.

“I remember seeing his post and thinking look at all that hair, I think I like this guy. He [Kerst] sent me an email with some demos, including a cover of “Jesus don’t want me for a Sunbeam” and we were sold,” Hislop said.

In terms of band dynamics, Hislop wrote a majority of the early martial, “I wrote a lot of it [early songs] and as we’ve moved on everyone started to write more.”

It is much easier for the band to work together as a unit rather then before where one person would use ideas that came from their high school years.

“I’m not a drummer so I will say what I’m thinking for an idea and then he [Sheets] will say no that’s terrible,” Hislop said. “They aren’t mean spirited just helpful suggestions,” he laughed.

Other then the sheer “raw” force of volume that they create together, the members of Akrasia feel a sense of comradery by playing music through a process that is “natural and humanistic as possible. We like to have songs that make people party, but also a lot of the deeper meanings of our songs are political or emotional,” Kerst said.

As they band as grown over the last five years, so has their lyrical content, Becoming have become less unfamiliar with the atrocious behavior of the side of our world that is a war hungry, egotistical boreoarctic species. According to the band they like to channel their music into topics related to “growing state authority, global warming and sadly seeing kids in cages.”

Songs like “Chaos Reigns,” which was inspired by the Flint, Michigan crisis, are examples of the kind of lack of humanity that creates an anger which they recycle into heavy riffs.

At the end of the day it’s also about the fuzz.

“I’m really just a fan of heavy music,” said Lonchar. “Rylan loves fuzz, I love fuzz, we always have fuzz on our guitars.”

Being in a band is lifestyle that they all claimed to feel destined for.

“I would never trade any of the shows we’ve played or the experiences we’ve had for anything. I never felt like I’d feel like a rock star, but I think this band has a lot more potential,” Sheets said. “This Band is only just getting started.”

Akrasia are currently in possession of a folder of riffs, beats and musical ideas. As for release the dates, the band hasn’t decided on a specific date. Lonchar did mention that “As soon as we find a location, we’re just gonna start going for it as quickly as we can. We’re trying to get everything done this year, we want to bombard the area with music.”

Catch Akrasia at The Shakedown Showdown on Aug. 7 and online at facebook.com/Akrasia.Bellingham/ as well as other social media outlets.