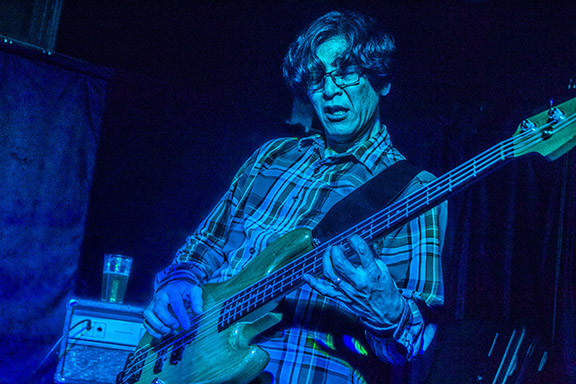 When Bob Log III announced that he would be making a Bellingham stop to his current tour, there were more than a few locals who were excited to continue the tradition of partying with Mr. Log.

Log has been playing in Bellingham for nearly 25 years (both solo and his previous band, Doo Rag) and his shows have remained far from ordinary.

The first act was local punk rockers, Stereo Donkey. The band features bassist Hiro Yamamoto, (yes you read that right, the same Yamamoto from Soundgarden and Truly) Pat Wickline on guitar and drummer Mike Bajuk. The group has defined their sound as a combination of garage-rock and surf-exotica.

They opened with their hit single “Swamp Thing” which is by far the darkest and most melodic song in their set.

Without using any lyrics, the band is able to hypnotize audiences with their psych-heavy riffs and epic prog rock production.

Yamamoto has not lost any steps when it comes to his playing. The way he bends strings, sways his body and swings his head around is identical and just as impressive as it was in the early days of Soundgarden.

Majuk’s impeccable sense of time behind the kit makes him a human metronome. The way he can time in Wickline and Yamamoto from heavy slow chords to blazing fast hardcore punk rock riffs within the same song is something to marvel over.

The killer rhythm section allows for Wickline to conjure scenes of psychedelic journeys and crashing waves with his solos that are a mold of Dick Dale and David Gilmore.

Following them were The Phone Books, another local rock group whose name comes from a love of Bill and Ted’s Excellent adventure. Their riffage is well… “most excellent.”  The band, which includes Bellingham music scene vets like LP, Jimmy Kastelic and Gabe Taylor, plays a sound has that 60s pop sensibility mixed with the aggression of SoCal-punk rock. They certainly would play well with Portland band Gaytheist. Their grooves are remarkably similar in the best of ways.

Their debut LP, Broken Maraca can be found on Bandcamp as is 10 actioned punk anthems that ring true to Greg Ginn guitar tones and the screams of Keith Morris.

Ending the night was the anarchist himself. Bob Log steals the stage all on his own as a slide guitar-one-man band.

Always one for fashion, Log plays in a full body canon ball suit that is just as tight as his playing style.

Throughout his entire set, Log wears a helmet connected to a telephone receiver which allows him stay focused on playing guitar and using his feet to create drum tracks despite the challenge of seeing anything through its dark visor.

As he plays beer cans are thrown at his helmet, alcoholic fluids hose down the stage, toast hops out of his on-stage toaster and is shoved into one’s mouth (yes that happened to me). Then, just when things couldn’t get any crazier, Log takes a new approach to crowd surfing by using an inflatable row boat to paddle over fans and get back on stage (a task that is far from simple in a venue as small as The Shakedown).

An evening at the Busyard Babes is always an “explosion of creative feelings and ideas in a safe space,” said Busyard member and Bobby Petite drummer Bella Cole-Preciado.

While this is not the first time music as taken place during their art shows or clothing sales with Rugged & REclaimed owned by Busyard babes, Eloise Gibson and Ginger Gionte.

Although this was their first official house show. The theme was ladies rock and punk rock is its anthem.

The bill featured Seattle solo artists Izumi (surprise, we were DI debate competitors in high school. Small world) they played jangle guitar chords with thick riffs and licks. Their tone of voice and coming of age lyrics puts you into a Wes Anderson movie.

Bassist Anaya Watson and Drummer Liv Victorino coming pounding in not missing a single beat. That is a powerful rhythm section that could be dangerous with some extra amps to up their already ground shaking sound.

They make an effort to get involved with the crowd. That means playing, dancing and yes even drinking in the pit. To put it lightly the band is a party.

This is there first time playing in Bellingham, but it will not be there last, according to the band they are already planning new shows.

Next up was local “best boy band in Bham” said frontman and rhythm guitarist Graham Wallwork.

It has been a while since I have seen this band play but performances their never ceases to disappoint.

Songs can be fun melancholy love songs that make you smile and dance. The next moment they are playing the fastest, riffiest, punk rock jam that has people hitting the ceiling.

They are so loud that the cops were actually called. Preciaido used her wits and diplomacy on the popo to keep the party going.

A stage that took close to two hours to build and set up with gear was dismantled in a matter of 15 minuets. Just goes to show how fast punks move when theirs some heat on you.

Razzleberry finished their set in the basement where things got sweaty. People started to take the vinyl records hanging from the ceiling and used them as fans.

Just when you thought things couldn’t get hotter, Bobby Petite closed out the gig with another legendary set.

This band is now a growing legend within the new-wave punk scene in Whatcom county, despite not even having released an album.

They continue to bring along an entourage of fans wherever they play, making for a rocking good time.

Now post BAMF the band has solidified many of their strongest musical attributes such as vocals and experimentation.

This will not be the last all music house show at the Busyard. Stay tuned at our social media for more shows.

Seldom is a show good from beginning to end. This was one of those few nights and certainly serves as a high point for local shows this year so far. Cat Valley’s surfy, indie punk to Wild Powwers brash and boisterous rock, and Summer Cannibals badass indie, pop rock made the whole evening feel incredilby cohesive. I honestly wish the lineup was a tour package that more people could have seen. It was just solid.

The whole evening felt empowering in so many ways. From the diversity present within each band to the progressive and topical subjects within the lyrics of the music, it all felt so important and further proved how representation matters in music.

Bellingham’s Cat Valley, opened the show with a solid set. I loved their use of harmonized vocals and harmonized guitars. They create a dreamy atmosphere with their music while their lyrics keep are thought provoking and keep you grounded. If there is any band in Bellingham worth going out of your way for right now, Cat Valley is certainly one of them.

Wild Powwers followed Cat Valley with a huge gain in volume. It was an energtic and dare I say powerful set. They are grungy, fast and I love them. For a three piece group, they sure sound like they have at least another three members. The volume of their set alone could fool anyone and made me glad I remembered earplugs. It rocked though and it was totally worth it.

Drummer, Lupe Flores, is phenomenal. From her local days with Sugar Sugar Sugar to now in Wild Powwers, she still shreds. Any opportunity I have to see her perform is one I always make an effort to take and you should too.

Summer Cannibals closed out the show and I am still picking my jaw up off the ground since seeing them. This Portland band knows how to make an impression right away. Their stage presence exuded rockstar and they are.

Their set went by in a flash. Their entertaining and tight performance coupled with charming stage banter made me wish they could have played an entire extra set.

I love their indie pop rock sound. It sounds incredibly authentic to the region coupled with very honest and topical lyrics that are usually found in more aggressive music. It is becoming slightly more common to hear this but the attitude in the lyrics is newer to the genre. I find it incredibly refreshing and love it.

The Shakedown consistently is getting incredible shows just as this and if you do anything after reading this, I highly recommend marking your calendar with any show in their future. You won’t be disappointed.