The Sky Colony: It’s all of us 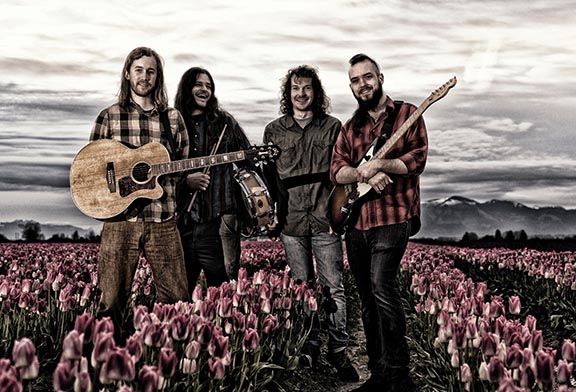 If I’m here to tell you one thing it’s this – despite anything you’ve heard, The Sky Colony is not a Christian folk-rock band.

But… they could be if you wanted them to. Wink, wink.

Kyle Findley-Meier and I joked around a bit while speaking on this point because it’s true. Maybe, we thought, just maybe, Christian listeners who would normally lean toward a tried and true Christian music selection could benefit from the offerings of The Sky Colony’s less patriarchal worshipings and a more, shall I say, awe-inspiring take on looking to a spiritual force for guidance and meaning.

You see, Findley-Meier (rhythm guitar, lead vocal) writes much of the content for The Sky Colony and he resides in the house of personal exploration into all things discoverable about the self and one’s relation to the forces at hand. He and his bandmates, Ben Meyer (lead guitar and vocals), and Marcus Nevitt (drums), apply some conscious intention toward having their music be spiritual in a sense.

“It’s a massive responsibility to be on stage saying things to people,” Findley-Meier said, “…It makes a difference what you’re saying, so I try to take my biggest life lessons and put them into music.”

Imagine a combination of Neil Young and The Tallest Man on Earth meeting up with the Fleet Foxes in a sleepy Skagit town and all of them coming together to make music that is appropriately harmonious and moving with a thought-provoking narrative. A little bit of love, some self-exploration and a touch of activism make up the contents of many of The Sky Colony’s lyrics from their first full-length album, In A Dream (2015). This work featured multi-instrumentalist Molly Hazel (vocals and banjo), who added a sort of delicate tune to the harmonies of Findley-Meier and Meyer. It was in many ways a sweet and almost child-like compilation of work that accomplished being both cheerful and quietly moody.

Their newest record, All of Us, is every bit different than In A Dream, Findley-Meier stated. Hazel, for one, is no longer with the band, and nearly five years have passed with a great deal of self-reflection and change, he added.

“This album is much less hopeful, ethereal and childlike than our last,” he said. “We went through many changes in our lineup in between albums and I experienced a lot of pain and suffering before a massive personal shift during that time.”

Much thought was given to our current political climate and how that may be linked to a deeper unsettled spiritual collective consciousness, Findley-Meier said. When writing the songs for All of Us, he wanted to emphasize the need for every person to take responsibility for the present-day state of affairs and to consider how all of us can come together to create a deeper, nonmaterial change in course.

And, in that way, the music of The Sky Colony sure is spiritual.

“The message really is that we are all just people,” Findley-Meier said. “It’s important to remain compassionate toward one another and remember that it’s not ‘us’ versus ‘them’, it’s all of us.”

The album art was designed by Max McNett, who grew up in Skagit. He listened to the album while making the cover, the result of which being a visual product that exemplifies the qualities of the auditory experience it represents, Findley-Meier said.

The Sky Colony took off on a regional tour Aug. 1 and will be playing at the Skagit County Fair in Mount Vernon, and in Bellingham for an album release show at The Firefly on Aug. 31. Follow their social media for updates.