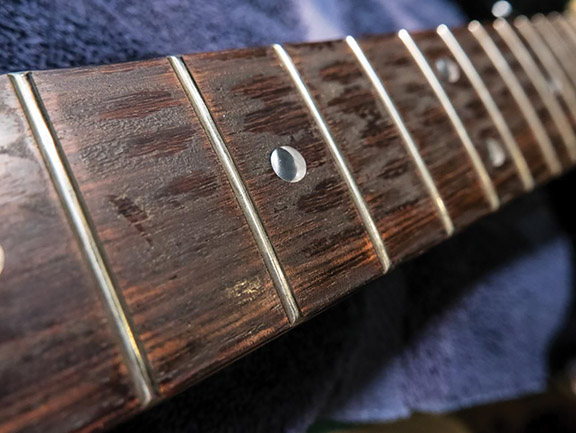 “You’ve got to shrink yourself down to the size of a fret.” This advice was given during a series of lectures on guitar set up by William Eaton, director of Roberto-Venn School of Luthiery. I was a student there at the time, and while most of the nitty gritty teaching duties were handled by the other staff members, Mr. Eaton would occasionally float through and offer up gems like this. William is a pretty out-there dude. He’s recorded a bunch of new age music albums, playing harp guitar, lyre, and other of his own string instrument creations, and collaborated with notable folks like Native American flute player R. Carlos Nakai. He had an ethereal presence at school, some mixture of nutty professor, Bob Vila, and Yoda.

On this particular occasion he was guiding us through fretwork, Bill Eaton style, when he insisted that we imagine ourselves to be miniature so we can get up close to the frets and get a good look at what’s going on. While some of my classmates smirked at each other, seemingly brushing off the old man’s suggestion, I soaked it up. I pictured myself shrinking until I was just a couple inches tall, climbing up onto the fretboard of the giant guitar in front of me. My first thought was “Holy crow, this thing is dirty!”

Instrument cleaning was a lightly covered topic at school, but over the years I’ve learned and developed a few methods to deal with most any level of grit, grease, gunk, and grime, and here I’ll share a few. Let’s start with the fretboard.On a well played instrument there is often some build up of dirt on the wood in between the metal frets. Years of sweat, string corrosion, greasy fingers, and dirt can leave a residue. For average buildup, I’ll usually start with a little bit of naphtha. I buy naphtha in metal quarts from the hardware store, but it can be found commonly in small bottles labeled as fluid for zippo style lighters. Take off the strings, put on a glove, squirt a bit of the fluid on a rag, and wipe across the frets, and then up and down the fretboard. This should pick up most of the surface dirt and oil. Fold over the rag and repeat. If the board looks clean, you are ready for oiling.

For a more tenacious buildup, I break out a fresh, single-edge razor blade. Lining the edge of the blade up parallel with the frets, and keeping it upright, I gently scrape back and forth between all the frets. This is something done by feel, ideally the gunk is scraped up exposing the clean wood underneath, while not removing any of the wood itself. Extra care must be given where there are inlays. Go lightly and slowly, and soon you’ll have a brand new looking fretboard.

Once the dirt is gone, assuming there is no actual fret leveling to be done, the next step is oiling.  There are a variety of fretboard oils and conditioners on the market, and I’ve tried a bunch of them over the years. While there are differences, the steps are about the same. Add a small amount of oil to a rag, and wipe up and down the fretboard until the whole surface looks darkened and slightly wetted. Let it sit a minute and then take a new cloth and wipe off any excess oil.

Some folks swear by one particular brand of fretboard oil, or pure lemon oil, or some home mixed variety. Myself, I use whatever is closest at hand. If you’d like to add a little extra shine, take a piece of 0000 steel wool with a dollop of paste wax, and wipe up and down the board, frets and all. Then take a fresh rag and wipe off all the excess wax, using decent pressure to burnish the whole thing to a nice shine.

All of the aforementioned only applies to a raw wood fretboard. On a lacquered fretboard like a maple Fender neck or Rickenbacker, I don’t use oil and certainly no razor nor steel wool. In this case, you can still use naphtha as a cleaner if necessary, and then finish off with any brand of guitar polish.

Like fretboard oils, there are many different brands of guitar polishes on the market meant for cleaning the body of the instrument. Generally speaking, if you have a somewhat modern gloss-finish guitar, any of those products are probably fine. Use an old T-shirt or get a fancy polish cloth if you’d like, just avoid paper towels or anything that might leave tiny scratches or lint. The first ingredient in most of these polishes is water, so even just a little bit of water on a clean rag would do the trick if you don’t want to spring for the polish. A lightly damp rag is enough, no need to soak it.  Among the options out there, my favorite is Gibson Pump Polish, and that preference is purely based on smell. I love the way it smells, and it’s never messed up any guitar I’ve tried it on.

All that said, some vintage finishes are a little more finicky. Old, dulled out lacquer, or a finish with lots of checks, French polishes, and others might not react well to a polish or even water. If in doubt, just wipe down the guitar with a clean dry rag. If that doesn’t do the trick there are further approaches, but they should be judged on a case by case basis.

If you come up on some grime or smudges that are really hard to deal with, remember, you can always shrink yourself down and get a closer look at the situation.  Make Bill Eaton proud.