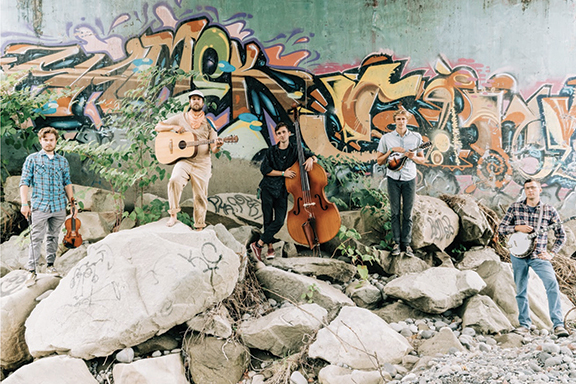 Bluegrass is a big thing here and the state attracts lots of folk, bluegrass and Americana bands. It’s no question why a band like Crooked Constellation was able to gain traction and take off in the local music scene.

The band formed four years ago when Ingram-Monteiro met some like-minded musicians. They, naturally, hit it off despite some almost 10-year age gaps and have been playing ever since. The one thing that holds them all together? “We all love music, specifically bluegrass, a lot,” Ingram-Monteiro said. “I mean, I’ve got a decade on all these guys… and while I’ve definitely assumed the role of bandleader for now, I think we are always moving towards a more democratic, collaborative songwriting process.”

It makes sense that the band would hold a similar viewpoint as their lyrics are powerful, political yet extremely poetic. Their music is full of melodic guitars and crisp fiddle, plucked bass lines and strummed banjo; their chemistry sonically undeniable.

“We all have a lot in common and I think everyone in the band would like to see a more just and equitable world where human communities are stewarding the land, air, and water and everyone has access to the resources they need,” Ingram-Monteiro said.

Their lyrics talk openly of the Northwest and its beautiful outdoors and scenery that so many move here for, while also reminding listeners of what it may have taken for us to live on this land today.

The band members have found that although age doesn’t play too big of a role in one’s ability to jam together and collaborate, it does change the way the band travels, tours, and performs.

“We would love to be touring,” Ingram-Monteiro said. “But the guys are all in school and Harmon is moving in January. In the meantime, we’ll be sticking to playing around Whatcom and Skagit counties.”

When asked about the thing that really makes the band what it is,  Ingram-Monteiro replied, “It has to do with the songs themselves. Each one’s got a little meaning, a little hidden poetry tucked into it. They all riff on nature pretty hard, but we dig into radical self-love, decolonialism, dam removal, migration and gatekeeping, finding oneself, breakups that are more reflective than blaming, etc.”

Much of the music was written by Ingram-Monteiro and some of the songs that the band sings today are over 10 years old, penned while he was traveling the country.

For more information, check out andyingrammusic.com/crooked-constellation.