HEIRZ: Out with a new album 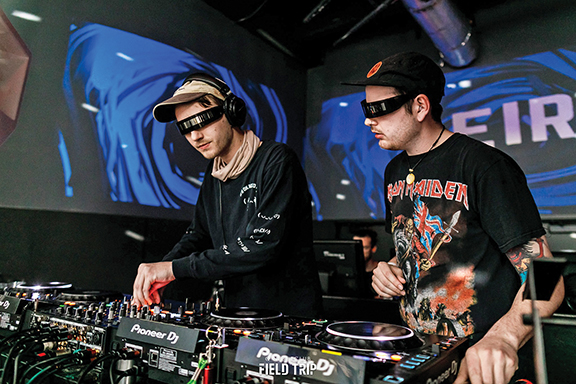 Antithetical to EDM sound, the local scene has been growing and flourishing without a ton of fanfare. Outside of the scene, you might not realize how many EDM artists there are locally, but the town is full of inspired artists creating music. One such group is HEIRZ, who recently released 2029  along with Human Error and Bad Luck Club – two Seattle based collectives. To celebrate the album’s release as well as their upcoming set at the Firefly (part of the Back 2 Bellingham music festival on Sept. 27), we asked Alex Sutherland and Haakon Taylor their thoughts on music, the new album and Bellingham’s EDM scene.

How did you start with music and how would you describe the genre/type of your music? Did you start out with any specific instrument?

Alex: I came from a super musical family. My dad has played drums all his life and my brother plays guitar/went to school for composition. They got me into playing the drums when I was 8. My younger sister is also a killer singer. I played in school band, jazz band, and a bunch of punk and metal bands through high school. I started DJing and producing after I graduated high school. I have always loved anything dark and heavy, which I think is a huge theme in most of the HEIRZ catalogue. I would say our sound is a hybrid of Haakon’s crazy sound design with my love for making hip hop beats put in a blender with ethereal, dark and robotic themes. We take influence from trap, dubstep, hip hop, drum and bass, and even rock, metal and jazz.

Haakon: I started pretty similarly. My dad played guitar, My sister sang, so that left me on drums. We would always jam constantly growing up. After I got into editing photography in high school, I got used to being sucked into a computer program all day, which I transferred that into electronic composing and a love for sound design. Music has always given me something and being able to hopefully contribute to that for others has been a strong passion for us. I would describe our sound as quite a variety. Alex is by far the superior drummer compared to me though, so our intricate drums progressions stem from his knowledge. We make whatever is fun to you, expressive, and wild. Our music is heavily bass influenced but draws from many genres.

Tell us a little bit about the newest album.

Alex: It is a 9-song concept album with all different styles of electronic music, with hints of our signature sound. We tried to tie everything together in a way that showed diversity in sounds, but consistent at the same time. I don’t really like describing my music, I love to hear other people’s interpretations.

Haakon: This album was a huge project for us and the first we’ve done like it. The album tells a story from start to finish in its futuristic themes and we hope our listeners can connect with that.

What’s coming in the future for HEIRZ? Tours or albums?

Alex: More music for sure, we will probably focus on singles and EP’s instead of albums for the next while – with the hope of finding more likeminded labels to release on. A tour would be awesome but we haven’t quite gotten there yet. For our album release party at the Wild Buffalo back in July, we did an all “Live” set where I played drums and Haakon launched all the clips, I would love to do more of that kind of stuff! We got to support and open for a lot of our favorite artists throughout 2018 and 2019 which was amazing, but to me the biggest goal is to get our production on par with the big dogs that have inspired the project.

Haakon: We are always constantly making music and will continue to do so until it becomes a point of insanity. We are already sitting on a lot of fresh, unheard material that we are starting to plan releases for now. We hope to have another strong year of shows with a couple big ones in September already. We are just always trying to take that extra step to push ourselves and our sound further and further. We kind of have this mindset that we are never taking a moment to be proud of what we’ve done, just focusing on how much we can still improve and reach bigger goals.

Who are some of your influences musically, locally or nationally? Do you work with other musicians around town or plan to move out of Bham?

Alex: My biggest influences are Eprom (and side project with Alix Perez, SHADES), G Jones, Bleep Bloop and Tsuruda. I have been super into Deadcrow, Brothel, Abelation and the Lost Dogz stuff as well lately. We have worked with many musicians in Bellingham, and have collabs out with Willdabeast and episcool. We also have a tune we made with Katie Gray that we have performed live a bunch. We need to re-record the vocals at a more professional studio, but I see that getting released soon. I just moved out of B’ham at the beginning of September!

Haakon: My biggest influences are pretty similar to Alex’s lately, I mean we are always showing each other new songs for inspiration. But Eprom, G jones, Bleep Bloop, Shades are some bigger names. Smaller names like GvO, Sub Trauma, and Mythm have been crushing their tracks. We love to work with other locals and all build together. Bellingham is a very musically talented place to live, but like Alex has already we plan to stretch our wings. Considering I’ve lived in Bellingham 25 years, I’m sure ill be back.

Any thought about the DJ scene in Bellingham in general?

Alex: It has grown a lot as far as underground electronic music goes. It is awesome to be able to play music we love to receptive crowds, it was a lot harder to get away with playing the stuff we make even three years ago. Shout out to crews like Bellingham Arts and Music Festival, Metanoia Collective and Underground Transmissions for creating bigger audiences for awesome music.

Haakon: We are extremely thankful for what the Bellingham scene in general has given us and the people who have transformed it into such a caring environment. Metanoia crew are some of the best we know and bring everything to their events. Underground transmissions, Elated Society, and Milk + Honey crews are killing it, too.

Follow Heirz on social media for updates and shows.