Hot House in the Big House 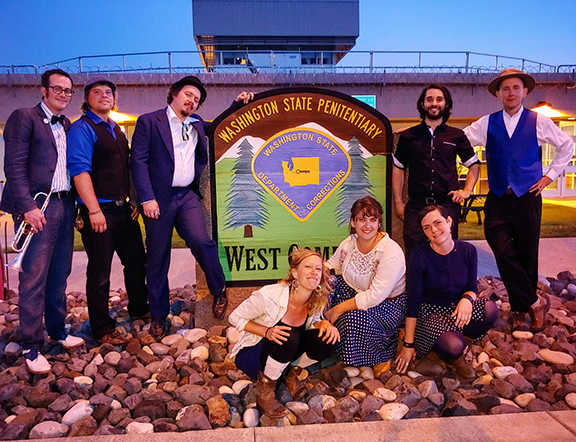 Years ago, our fearless leader and trumpet player, Pace Rubadeau, watched Walk the Line and got a hair up his ass to have a band play at a prison to entertain inmates. Fast forward to 2019 and that dream became a reality.

This first came onto my radar when he started sending members of Hot House Jazz Band details on hoops he had jumped through to get there and that there were a few more we had to jump through as well. The first for band members was a background check. We gave them (Walla Walla State Penitentiary Corrections Facility) our personal information to run us through the system to make sure that we were legit. Several Social Security Numbers, self descriptions, and mother’s maiden names later, we were all approved and now had to fill out an Inventory List. Since we were providing sound we had to write down everything we were bringing in, down to the last guitar pick. Once we sent that in, it also got approved and we were good to go.

We took several vehicles to get to Walla Walla. My van, Big Bertha, contained Pace (trumpet), Casey Conner (banjo/melodica), and myself (upright bass.) Ani Banani’s (vocals) car, Velma T. Volvo, had Savi Louise (vocals), and Pete Irving (guitar and vocals). Finally, Sadye Osterloh (vocals) drove her zippy car with Christian Casolary (drums) in tow. We called them Team Turbo as they left Bellingham hours after us and got there waaaaay before we did.

Upon arriving in Walla Walla we had just enough time to check into our hotel rooms, change into some fancy duds, and hop over to the Penitentiary. When we found our specific location for load in, we were welcomed by two escorts who had our inventory lists. They were passed out to each individual member and we verified that all items were accounted for. There were a few cords and other miscellaneous things that weren’t on the lists so we told them that and they were approved.

Enter prison. We immediately went through a metal detector and then given lockers where we had to put all of our personal belongings, save our Driver’s Licenses and the key to the locker. We then piled into a room with all of our gear with one door that had to be open and one that had to be shut.The back wall door opened as the one behind us shut and then we piled into ANOTHER room where we showed a lady behind a glass window and a hand slot our ID’s which were traded for a badge to be worn on our person at all times and a hand stamp to verify that we were not prisoners. We then proceeded to walk through the grounds of the prison for a good half-mile surrounded by chain link fences and rolled barb wire standing at about 12 feet high I’d say. Our escorts gave detailed descriptions of the buildings we walked by such as minimal and maximum security, garden, recreation area, etc.

Along the way there were many electronically operated fence, where either our escorts would let us through, or people in the watch towers who were watching us, some with sniper rifles, would let us through. We finally got to a gymnasium where we rested for a bit before setting up our equipment. When we started setting up we realized we had forgotten the sound board, whoops. So, we swapped locker keys, walked all the way back through that maze to get to my locker, to get my keys, to get to my van, to grab the board and a few cords we probably should have grabbed the first time around.  Needless to say, when security guards are standing around you, you tend to feel a little rushed of such things. Not to mention that the van wasn’t in an easy place to get to like it usually is. In the alley way behind the stage is much more accessible than a 1/2 mile walk through the highest of security.

While they were on that adventure, I started setting up our equipment outside on a slab of concrete looking at what appeared to be a big ol’ soccer field, while others rehearsed in the gym. Once we finally actually got the board we sound checked and anticipated what would be probably one of the more rare gigs of all of our lives. When we were ready, one guard walkie-talkied another and we saw a couple prisoners in the distance. Then about 200 inmates came all at once. I feel it should be mentioned that there was no barrier between us and the inmates. They set up small cones around our perimeter and we had about 10 or so security guards standing… on guard. The set started off with a few instrumental tunes and we were very happily received. Most of them were sitting criss-cross applesauce on that grass, others standing, some occasionally dancing and then would stop pretty quickly as it appeared they may have been judged by others. We then played a nice long set with “The Honeys” which consists of Ani, Savi, and Sadye. There was much applause, cheering, and the occasional, “You guys rock!” At one point, Casey exclaimed, “You guys may not know it but this music is very in right now!” I found that hilarious not only because are the inmates oblivious to what’s “in” but we play 20s-40s standard trad/swing/jazz, not exactly what’s on Top 40 these days.

As the sun started to set, we ended with a couple more instrumental tunes and the prisoners politely and calmly walked back in the direction that they had originally come. One feller came around and asked if a local blues radio station was still airing, to which we did not know, while another conversation about mustaches took place with other members of the band. We soaked in what had just happened for a brief moment before we tore everything down and trekked back across. We reminisced on our way back and it seems like the same hair started growing in Pete’s ass for Hot Damn Scandal. In walking by a recreation area, someone politely asked one of the escorts if he could have a basketball and it was promised would have one the following day. It came to our attention that live entertainment happens for them only once every couple of years and it’s usually Christian oriented. Since there is no room in their budget for funding these sorts of things, we all played free of charge, being payed in memories and stories that will last forever.  No phones were allowed inside so we got our photo taken outside of the facility, just before heading to The Big House Brewery (appropriately named with menu items all prison themed) where we enjoyed food and drinks.

Being a long day for everyone, we retired to our hotels, had a good nights sleep and woke up refreshed.  Mr. Ed’s Diner was our rise and shine and then we checked out the fabulous Museum of Unnatural History in Downtown Walla Walla, full or radical, political, abstract, hilarious, and thoughtful art. Once we got our kicks, we got into our respectable vehicles drove back west.

As this was Hot House Jazz Band’s final concert, it goes without saying that this was a glorious culmination and a perfect ending. There is no doubt in my mind that you will see Hot House band members pop up in various other projects around town. Cheers!