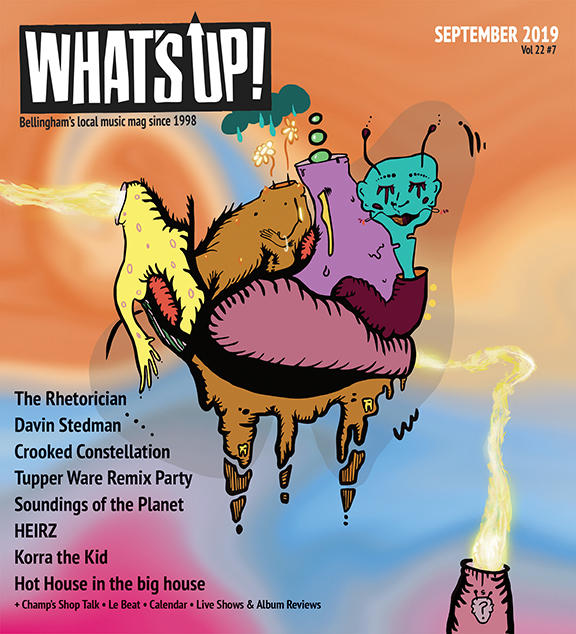 Hiya! How are ya’ll doing?

So, the Up and Up closed. For many of you, it’s a moment of “oh well, bars come and go.” But the truth is that the Up was a legendary venue in Bellingham and instrumental in the music scene’s growth and development in the late 80s and early 90s. When the Up started doing shows, local bands that played originals didn’t really have a place to play, outside of house shows and the occasional opening slot for a great show on campus. The Up gave local bands, many of whom were inspired of the PNW sound (that was on the verge of exploding), a place to play, a place to grow, a place to call home. Soon a couple other venues (Speedy O Tubbs and the 3B for example) opened up, but it started with the Up. The local music bar scene can be traced back to this one place! It’s been years since the Up was a regular venue, but when it was it was really something. And for what it’s worth, I loved it. I absolutely loved it.

I’ve had a few questions regarding the magazine, going non-profit and who is in charge. I, Brent Cole, am still in charge and we’re shooting for a non-profit start date in 2020. Lots on our plate these days and I don’t want to rush things… that is still the plan. Thanks for your support!

There you are, a couple hundred words on stuff I’m thinking about. Now on to the bands.

I hear rumors of a new Meece record coming out soon. The band is still playing even though Lance left us for not greener pastures in southwest Washington. Then again, he had a kid and had to do what he had to do… I just miss him soooooo. Maybe just ask the band when they play The Waterfront on Sept. 27.

By the time you read this, the new Death Cab for Cutie record will probably be out. I haven’t heard anything beyond the couple songs they’ve released, but I love it. Their second single, “In the Ground,” is probably my all-time favorite song and it was just released. It’s perfect for my ears and my little heart. (In case you are wondering, the band is local because one of their members lives in Bellingham. With that, so is Primus… crazy drummers living in Bellingham).

Have you listened to Craig Jewell’s (Wild Buffalo/Petty or Not) song, “I Dream?” You should… shows a different side of Craig that I love. It’s on Youtube, get it. Kevin Chryst, Aaron Guest, Cayley Miranda Schmid, and  Clea Taylor Johnson helped in making the song. And it is dreammmmmmmmy.

Castlegate has released a new album on Soundcloud titled The Nine. It’s kind of a hip hop/pop mix with a cover that’s so ridiculously good. Definitely worth checking out. I don’t know much about them other than they’re friends with Pascal and Pascal is awesome.

The Sheen are taking a little break, but have some good times in store for October (which I can’t quite mention yet). In the mean time, check out their new EP Thud which includes two improv pieces that were recorded in Ojai, California while they were on tour last summer. The other three songs include contributions from Carly Gilliand (Ibex, Smooth Kiwi) and Matty Harris. Get weird.

Two-piece band Melancholia released a RIPPER of an EP last month. With Noah Burns on drums (ex-Wild Throne), Gage Lindsay’s project has really come together. This is a great band with so many riffs; not in the stoner rock way, more in a doom metal sort of style. Check out the recording and see them live.

Amber Darland has also released a new album, There’s a Calling, and it’s delightful. Amber, who is half of The Sweet Goodbyes, is a great songwriter and this album shows her talents. This is also a perfect example of why this music scene is so much fun! I can write about Melancholia releasing a new album then write about Amber Darland releasing a new album. Two artists you couldn’t be more different, both making great music in town. Side note, the cover of Amber’s album was done by Jessica Olson and it, like the music, is fantastic.

ANOTHER BAND HAS RELEASED MUSIC! Gallows Hymn put out a big ol’ batch of MET-AL last month with their new album, The Gathering Storm. It’s full of some serious chunky metal riffs, so get on it.

Khu.éex’ has released Heen and it’s epic. The album is the third of four recorded as a band (before they lost a couple of members, including the legendary Bernie Worrell). I’ve just started diving into the album and it’s textured, beautiful and stunningly weird. I love it, I love it, I loveeeee it.

LipStitch was in the studio at the end of July with the mighty Erik Wallace, playing a little rock ’n’ roll that’ll soon be heard by your anxious and excited ears. As I probably say every month, I love this band – such great songwriters with a genuine love for what they do and for each other. Not sure when the album is coming out, but hopefully soon.

The Dawn Bombs were in the studio last month. THAT’S ALL I KNOW.

After months of hibernation, Mount Saturn is back at it with Josh Rudolph playing drums. They released their album then had to go through a drummer change which took quite awhile, but thankfully all is ok and the band is ready to rock. I’d put them in top five favorite local bands these days. SO MANY RIFFS.

Make.Shift’s annual Halloween Cover Show is about to stop being an annual event… which sucks, but is understandable. The last of the Halloween cover shows will be Oct. 25. I know they’re doing one for Valentine’s Day… but will there be another? Who knows (actually, I do know, but I’m not telling).

Herb’s Cider is hosting Herbsstock on Sept. 14, a block party at their restaurant (1228 Bay St). As it’s a block party  that means… ya know… they’re closing the road down for some music! Which I always love. Staxx Brothers and Fred Green will be opening with the headliners being a set by KJ Sawka and Tim “Herb” Alexander. This might also be known as an epic drum clinic… with cider. Aka, heaven, so don’t miss this.

Michelle Nessk’s horror film, Just a Girl, is part of the anthology, Shevenge, which can be viewed on Amazon Prime. The film is awesomeeeeeee, so check it out. Side note, Michelle is awesome and one of the most unheralded person in the arts community these days. Check out her film work.

Are you familiar with Dark Darkness? It’s a sci fi web series from the brain of Wilson Large and it’s damn entertaining (you might even see a friend or two of yours in the production). WELP… the series is now going to be a comic, which will be released this month and it’ll coincide with Boundary Bay rereleasing the Dark Darkness beer! Beer and comics?

Bellingham Oktoberfest 2019 is coming Friday, Sept. 27. Hosted by Opportunity Council and The Volunteer Center of Whatcom County, you can enjoy German and Autumn-style craft beers and ciders, food, music and more. Ages 21+ only, at Depot Market Square in Bellingham.  See more information at https://www.oppco.org/oktoberfest/ or the Facebook event link.

The 1st annual Bellingham Veg Fest is lined up Sunday, Sept. 22 from 11 a.m. to 5 p.m. at Depot Market Square. There will be food, products and services, and entertainment.

Supermissive is doing a West Coast tour this month. They are a talented sneaky band and more people need to be checking them out! I have a feeling when their new album is released the band will “take it to the next level” or whatever cliche you wanna use.

Hot House Jazz Band is closing up shop, which sucks. SUCKS SUCKS SUCKS. Loved what that band was about, but as many of the members are in other bands and everyone is busy, it just didn’t work. Their last show was at the state pen in Walla Walla… THAT my friends, is how you play a last show. Read all about it in this month’s Tales From the Road. Best to all of you, and thanks for sharing your music!

Welp, that’s about it for now. Thanks for reading the paper, thanks for supporting our advertisers, and thanks for being you. See you next issue.