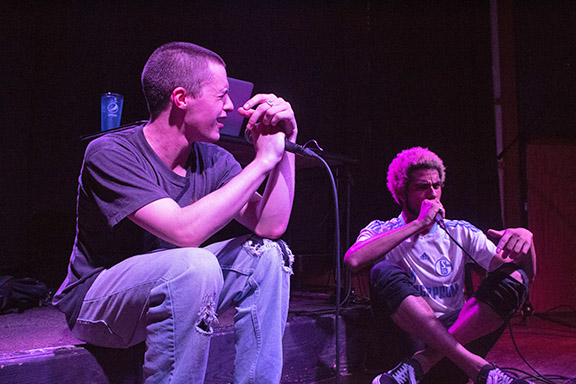 Alive in the Night, The Rhetorician, Poison Jams and Chrvns

While most of my work here at What’s Up! has been reviewing local rock and metal bands, I am a fan of any music that pushes the boundaries for alternative music. This includes some bass heavy, old-school mixed new-school hip-hop.

This month was The Firefly’s first all rap show, which saw fans, young and old (there was man in his late 60s there gigging out harder than most of the younger crowd; another reason Bellingham’s music scene is so eclectic) jumping to just a few of our top hip-hop acts.

Port Angeles artist, Alive in the Night, started the show with a mini set to trailer and EP they are currently working on. Despite the lounge being filled with just the other acts and few stragglers, he brought ample energy to share with us in Bellingham and proved to put on an exciting performance.  Even during soundcheck he was afraid that the stage wouldn’t support his wild antics.

Following was comedy-rap duo [just for the night] Poison Jams and Chrvns. These two goofballs are the personification of absolute fun, while on stage, making them the Beavis and Butthead of Bellingham’s rap scene. Their punk rock/lo-fi rap sound is similar to Brockhampton and they are just as rambunctious on stage, as they are unable to stay still for even a second.

Continuing with the 90s references, The Rhetorician also known as “The Fresh Prince of Bellingham,” closed out the show with a set that proved our city has a top tier rap artist.

Originally from Philadelphia, The Rhetorician traveled from afar in search of a tranquil environment to inspire his music. He found this home in Bellingham and has blessed us with bars worthy of Kendrick Lamar.

By changing DJs every performance, new life is brought into songs allowing for The Rhet. To pump up the intensity with a fresh perspective. In the past he has worked with NPyboy (who also played with the Rhet. August 23, at Studio B) and Klefto (producer of “Whateva Man” and new single “Quincy”) but for this set he teamed up with DJ Slap Serif (producer of “The Session” and “Rhetorician Slaps”)

Klefto brings that lounge-jazz element, obliviously inspired by the Rhetorician’s love of A Tribe Called Quest. You can especially hear this on “Whateva Man,” The song intros a xylophone solo [which remains the riff of the song] filtered through tv static reminds me of some 60s nostalgia, Twilight zone theme music.

Slab Serif beats have a rhythmic style that is closer to a reggae sound. This creates a heavier bass which builds a powerful intensity that allows for The Rhet. to command his audience with ease.

Being able to flow poetic and contemporary raps filled with themes of politics, the environment and self-discovery, over these experimental beats proves that he is making music for himself and hoping others come along for the ride, rather than just riding a hype train.

To catch up on any of these bands future plans, you can find them on Facebook and Instagram, as well as hear any of their music on Spotify and Bandcamp.

I couldn’t think of a better way to get an early start to a weekend chock-full of shows, then to have attended Thursday’s, August 8, gig at the shakedown.

whether it was Photo Ops’ hallucinogenic folk-pop, State Park’s funky dream-pop or the progressive-metal of Supermissive, each group brought their signature blend of psych, heavy rock.

Los Angeles artist, Terry Price, Known as Photo Ops on stage, made the brave decision as a solo acoustic act to book a gig with two, full bands who certainly know how to rock.

Despite having no one to hide behind, Price excited the small crowd with belts of low-end vocals. Their powerful voice combined with thick stringed acoustic guitars created a high-volume tone, sounding as powerful as an orchestral choir.

The style and atmosphere to his sound is reminiscent of Eddie Veeder’s solo, acoustic persona and even pays tribute to the nature and political themed folk rock of Neil Young and The Shins.

As State Parks made their way to the stage, a few more heads joined the crowd to watch these young rockers lay down some groove-oriented jams.

This band doesn’t depend on lyrics as their main component but rather an emphasis on specific vocal deliveries. The way their lead vocalist blends chilling whispers with the gospel like howls from their backing vocalist, makes for a haunting yet beautiful performance.

Where they excel is their ability to turn their short songs into epic instrumental pieces. Songs like “Broken Cassette” and “Hindsight” are excellent tributes to fans of the Grateful Dead, by switching between vocal driven jazz-pop songs to experimental improvisations.

Supermissive took a break from recording their new album, A Sound for Sore Ears, to play their first show since late June with Devil Wood and Drown the Mountain.

Since the 2018 release of their debut album, Trash is King, Supermisve have aimed to break down any labels or boxes that border their always evolving sound.

Do they have fuzzy guitars? Heavy riffs? And screaming vocals? Yes, Yes and also yes. All of that is still there. However, that hasn’t stopped them from expanding into approaches that show off their other musical interests.

With the addition of Bird & Shooter keyboardist, Aaron Kawaguchias as their newest member a new style of doom has been brought to the table. His tones are evocative of the 12th century gothic period church organs, which adds funeral doom element, similar to bands contemporary metal bands such as Bell Witch and Windhand.

This gig was also crucial because they showed off some brand-new songs (hell yes!). On their previous album, songs focused primarily on riffs that were connected together by improvisational jams, while their new tunes flip around this concept by using long, jazz focused bridges as their primary source of heaviness.

They’ve applied this jazzy-funeral-doom sound to the live versions of their previous songs. The already super heavy tunes “Necessary Evil” and “Mindless” (Which I finally got hear live) are brought to new levels.

The only thing these new songs are missing are the political and environmentally themed vocals and lyrics that Supermissive excel at delivering. The band has returned to Unknown Studios in Anacortes WA, to finish recording and mixing vocals for the record which will be released this fall.

It was an absolute honor to have Oakland’s “Prince of Prunge,” Kevin Nichols and his band of punk rock delinquents share the stage with two of our biggest acts, Lipstitch [who opened for DCFC early this year] and Hello I’m Sorry [who are currently preparing for another tour of North America.]

Lipstitch made things hard to follow right of the bat, with each song having you bang your head harder than the last. The concept of the group was to play Joan Jett covers, with a few of their own songs sprinkled in, but this performance was the end of Lipstitch being a cover band by replacing those Jett songs with brand new originals.

So far, they only have their two singles “Best of Us” and “Tough Year” available for listening on Spotify. However, in previous interviews they have mentioned plans about recording new material that’ll be ready for our ears to enjoy real soon.

The song “Tough Year” is a major standout in their set. The song sticks to their inspirations, sounding very much like a modern Joan Jett song, without eliminating their own personality.

Drummer, Bryan Hunter, lays down some fierce fills with even more ferocious facial expressions, making him the Animal (from the Muppets) of Bellingham. His deafening kick drum sound allows for the rest of the band to turn up the volume on their amps and blow out any and all eardrums that come their way.

Next up was Kevin Nichols [who plays with his fellow bandmates in The Co-Founder.] they are on tour supporting their new EP Long Lungs. The title track sends you into an instant rush. There is an impossible urge to slam dance along to its crunchy chord intro and swank-rock sounding verses.

Compared to their previous releases Long Lungs is filled with supercharged, thrash jams. Even the last song on the record, “Easy Way Out” which is by far the slowest song they have, doesn’t lose any intensity they maintain throughout the rest of their set by switching between the sludgy intro riff and speed freak choruses.

Yet again, Bellingham is provided with a band that is backed by a stupefying rhythm section. Drummer, Sam Thornton, makes sure everyone else can crank to 11 by playing earth shaking beats, while the bass [who played with a fractured wrist] pops in and out to keep things sounding as smooth as can be.

Last but not least, leaders in the Bellingham music scene, Hello I’m Sorry ended the night with another one their outstanding performances.

Each member of this rag tag group of indie-rockers have strong persona’s that individually are bizarre but together transforms the band into a powerhouse of volume and energy.

Whether its Bassists, Thomas Hudson, who flails his lengthy hair back and forth as he twosteps throughout the whole set, Drummer Zach Sullivan’s chill expressions despite playing booming beats , Nate Khan’s chaotic solos or Lead singer Seth Little’s melancholy stage presence, each piece fits perfectly into creating of most stratifying musical puzzles to ever come out of the PNW.

They are currently touring in support of their 2018 album Meloncandy and singles “Alllright” and “Laughing,” which released early this year.

To catch up on any of these bands future plans, you can find them on Facebook and Instagram, as well as hear any of their music on Spotify.

Our friends over at KZAX radio never cease to fail in the department of promoting spectacular gigs. The alternative music station put on monthly feature shows and this August’s was no exception.

OEA personify all the best elements of an experimental live band. They use sludgy bass riffs, phaser pedals to simulate the sounds of intergalactic space travel and harmonizing vocals that sounds like a psychedelic choir.

Following them was, Narrow Tarot. The group consists of Tessa Tasakos, [keys/vocals] Trevor Fett, [guitar/vocals] Jo Krassin, [drums] and Marcus Chavez [bass]. These hipster punks use fashion, screams and their grooving booties to put on a specular performance.

Tasakos channels their inner Grace Slick [Jefferson Airplane] and belts out powerful screams. They are backed behind a heavy rhythmic section similar to modern rockers, King Gizzard and the Lizard Wizard, by playing instrumental call and response sections.

They take classic blues licks and riffs and transform them into psychedelic heavy-metal masterpieces. The use of low-end keyboard tones makes them sound twice as sinister.

Closing the gig was local garage rock outlaws, Cop Talk. Despite having only reformed to play live shows and record songs within the last year, they have made big strides to integrate themselves into the local scene.

Having recorded an EP, shot a music video and playing to a roaring crowd at this year’s BAMF, Cop Talk have quickly made a name for themselves in Bellingham’s musical community.

Each time they perform, both the band and crowd launch into an extravaganza of movement and screams that make for a rocking good time.

I can’t get over how great their tune “Dave’s” has evolved through each live performance. During the song, guitarist and vocalist Tanner Small, handed off his instrument to fans in the crowd to finish the solo for him.

Follow all of these groups on their social media and streaming platforms for updates on shows and new music.