The Rhetorician: The Fresh Prince of Bellingham 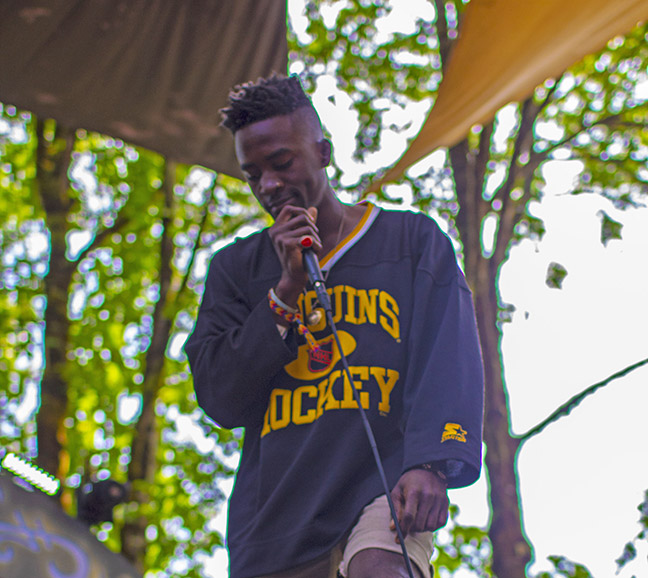 For decades, Bellingham has been an incubator for musicians and artists wanting to develop their style and break into the industry. It has famous indie-rock bands, dance music and heavy metal acts but the one ground it  has yet to break into is rap and hip-hop. Jordan Moss, who goes by the name The Rhetorician, may be the artist to do just that.

Ever since the emergence of the now internationally famous rap artists Kendrick Lamar and J. Cole, avant garde, jazz-rap mixed with contemporary production has been pulled from the underground and into the mainstream.

Groups who paved the way for experimental hip-hop such as A Tribe Called Quest, Digital Planets and Eric B & Rakim are now being appreciated for the genre they elevated to new levels.

Being deeply influenced by all of these musical predecessors, Moss is an artist who is channeling those sounds with a healthy respect for modern music. He releases singles with a stealth and swagger parallel to his musical soundscapes.

Moss moved to Bellingham in 2017, after graduating from The University of Pittsburgh.

“I got a job here through a family friend on Facebook. With the internet you can assemble a team that will help you to succeed,” Moss said. “They let you know where the best places to play are at. You’ve got to travel and find a way to play the road.”

Back in June, Moss was well received while playing BAMF for the first time. They performed current singles such as “Whateva Man” and “Rhetorician Slaps,” as well as playing songs that he is preparing for his debut album.

Moss’ current catalogue features a variety of DJs local to Bellingham’s EDM scene, such as KLEFTO, Slap Serif and Pacifix. By using more than one DJ, Moss captures the eclectic element of the city’s musical landscape.

Through combining rhythms and production techniques found in jazz, reggae and space-rock, with each release The Rhetorician leaves listeners surprised and wanting more.

“Bellingham has a dope producer and beatmaker scene. Not too many people know about it but there are more than a few hella talented people I’ve worked with here,” Moss said.

As to why he didn’t move to Atlanta or Chicago, cities famous for their strong rap scenes, “Bellingham is an amazing place to create out of,” Moss said. “With the nature all around us, it is easy to escape, it’s truly magical.”

Moss has released a mixtape on SoundCloud and Spotify, along with two singles for his debut album which is set to release on Oct. 24, 2019.

“The recoding process here has been chill. I record at some home studios. I’m still meeting people and networking so I can record in an official studio,” Moss said.

To maintain his musical trajectory and separate himself from other artists, Moss doesn’t play games when it comes to the writing process. He avoids lazy lyrics and physically trains on a daily basis. Through exercise and mediation, he preserves his mental health which translates into his writing.

“I was a wrestler in college before I left to play music. I’m familiar with the grind and performing on big stages, I use that same mentality in my performance,” Moss said.

This Fall is a busy season for the Rhet. He will be playing the Sh’Bang Festival Sept. 6-7, Sofar Sounds in San Francisco on the 23-24 and an album release party on Nov. 8 at the Firefly Lounge.

“The song I get the most excited to perform at these festivals is “Power Ranger Days,” Moss said. “I wanted to be a power ranger as a kid and Zack Tayler the OG Black Ranger was one of the first black superheroes I saw as a kid.”

In between shows, recoding music and introspective workouts, Moss listens to a variety of independent artists to collect inspiration from.

“Some of my favorites right now are Sault, Steve Lacy, Jungle Emancipator, Emmett Kai and Weval. It’s so key to listen to all styles of music. It really shows when you don’t,” Moss said.