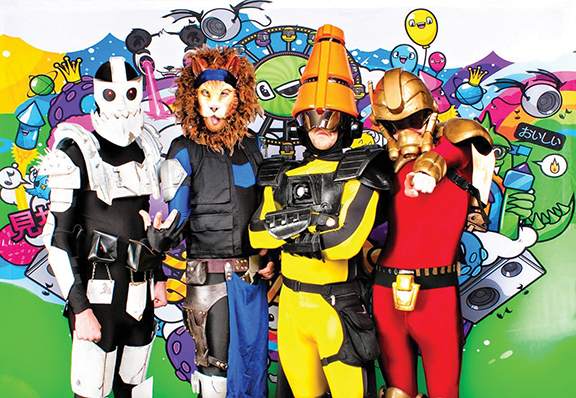 Tupper Ware Remix Party (TWRP) is not your typical group that met during a college basement jam sesh and just sort of coincidentally became a band type of band. No, no. They are far different.

One might go so far to say the concept of college is even foreign to these guys. You see, TWRP comes from and operates beyond time and space as we humans know it. They are far beyond the grips of our reality and deep into a multidimensional realm.

Doctor Sung (keytar, keyboards, talk box), Havve Hogan (drums, electronic percussion), Lord Phobos (lead guitar, acoustic guitar) and Commander Meouch (bass, backing vocals) pay no mind to the passing of time, have little to do with our ordinary human desires. They have come here instead on a strict mission – to end all boredom.

The story goes that Sung was born during the time of the Big Bang, his parents died of boredom when he was a small child and he was left to his own devices during the first Ice Age. He had an epiphany billions of years later (after earning his 69th degree of blackbelt in keytar) and discovered his life’s purpose was to “release humanity from the clutches of boredom through epic rock music,” wrote Dave Hurlow of Scope.

Sung was magnetized to Hogan during the Mesozoic period, when he found him unconscious in a cave and resuscitated him by placing an 808-drum machine in place of Hogan’s heart. Meouch and Phobos were found somewhere in the future. Meouch had been smuggling funk music into otherwise boring star systems and Phobos was the Lord of a highly evolved people who Meouch managed to reach with his funk, which ended up destroying their civilization. Phobos was on the verge of killing Meouch when Sung swooped in and commandeered both of them to join his band, Hurlow wrote. They found themselves on our planet, Earth, in Nova Scotia, Canada, in the year 2007 A.D. and have been steady on their mission of diminishing boredom by spewing the funk.

TWRP have released two full-length albums and seven EPs since their landing. The most recent work being Return to Wherever, which debuted July of this year and features heavy influence from Japanese funk music from the 70s and 80s. The album was recorded in Los Angeles, the first to have been recorded there since their recent relocation to the City of Angels from Toronto, Canada.

I had the pleasure of speaking with Meouch last month, who affirmed something that I had noticed – this is a band with a particularly enthusiastic and engaged fan base. It’s as if their intergalactic vibrations have a certain je ne sais quoi that sets them apart from other costume bands of our time.

“There’s a lot of love from the fans and people are always writing their own iterations of our story and making artwork about us,” Meouch said. “Instead of a bunch of dudes on a stage it’s heroes and comic characters – it’s a lot more fantastical. It’s always a trip when we play a show and people are cosplaying and you look out and see four of yourselves in the crowd.”

I couldn’t help but wonder if part of this enthusiasm has to do with the unusual identities of TWRP’s members. Something about looking at a performer in costume allows the mind to wander and have more creative freedom over who that individual is. If this is true, then maybe these fans are able to feel a closer, more liberating connection with the artists and thus become more involved and dedicated to them.

Too, this band has spent less time giving their fans long, drawn out full-length albums and have instead produced short and easily consumable EPs.

“We’re not the type of band that needs to sit down and work on a record for three years,” Meouch said. “We produce work relatively quickly and EPs work best for our pace.”

They are also a performance band and spend much of their time on the road touring and playing live shows. These performances are known to be extremely energized, wild and choreographed on occasion.

Looking forward, TWRP is heading out on their first full European tour alongside Ninja Sex Party. They are completely sold out for all of their UK shows, Ireland and the Netherlands. They have a particularly enthusiastic fan base and it spans beyond the U.S., into Europe and far out into the future.

Catch TWRP at the Shakedown on Sept. 15. Follow them on social media for updates.