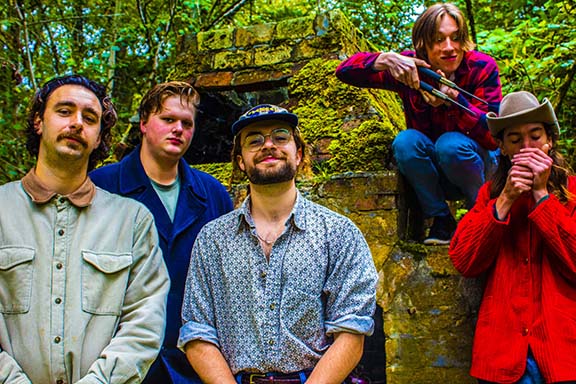 article and photo by Chris Butcher

In the late spring of 2018, six companions started casually jamming and writing songs in a loft above a mutual friend’s boat shop. Motivated with what was created, they decided to take the project a step further by moving into a house that has become their artistic haven.

In the time spent living together, Bird & Shooter have used the space to practice, record and refine their musical ideas, becoming a piece of Bellingham’s contemporary rock scene.

The band is currently made up of dueling guitarists and vocalists, Max Johnson and Nathan Arthur, Chandler Johnson on drums, Nick Barker on bass, percussionist Asa Morris, and keyboardist Aaron Kawaguchi (moving to New York).

Soon after forming they got in touch with their friend and producer in the Bellingham music scene, Nate Kahn (guitarist of Hello I’m Sorry), to help them record four of their best songs on a Tascam 38 tape machine.

Impressed by what the band had put together, Kahn sent the tapes over to Sam Wesner (guitarist of Supermissive) who helped by mastering them into polished songs.

Their inspiration on this record came from creating meditative tones for fans to groove to. It is full of avant-garde soundscapes channeled through psychedelic-pop to become what is known as shoegaze music; a style of rock categorized by its approach to create a blurred distinction between separate instruments and vocals.

The process of writing the songs is primarily shared between Max and Arthur, either of whom will come up with a chord progression or a riff that they present to the rest of the band to each contribute their own individual pieces of flare.

“It is refreshing to record with the Bird & Shooter boys versus what I have done in the past. We recorded straight to tape over the course of a few weeks mostly at our house (some bass and drums were recorded at Champion Studio). Normally I am in my room pumping out something pretty carelessly just for the hell of it. It’s great to be able to work together and create a unique and polished product with my closest friends!” Arthur said.

Earlier this summer they turned their home, located on Woburn Street, into an all-ages venue named, you guessed it…the Woburn House.

In the last three months they’ve hosted/headlined shows with a few of their musical peers such as Cop Talk, Jackie, Smooth Kiwi and Organized Grime. These gigs which commonly feature psychedelic, liquid-light artists, Elixir Light or Noctiluca Lights, have been met with animated responses from fans.

“Having the ability to headline shows in our living room is amazing. It’s a great way to meet people, get connected with other bands and give back to the community. We’re trying to make it more about other bands in the scene as well as being a spot for touring bands,” Barker said.

All of them feel something special for helping Bellingham’s scene by having a place for bands to experiment with ideas in a safe and comfortable setting.

“It’s just about one of the best damn things that I’ve been able to be a part of. We’ve had bands come from places like Calgary, AB or Missoula, Montana. We’ve got a band called Bad Phantom coming all the way from Las Vegas playing on Nov 2. It’s cool to be able to host bands from places we haven’t been to. Sometimes they stay for a few days and you get to build relationships with people you wouldn’t normally get to do that with,” Max Johnson said.

Like every band, Bird & Shooter do whatever they can to develop diverse characteristics. Collectively they expressed that sharing eclectic influences, enjoying life and challenging each other musically are all ways that they maintain their originality, as well as joking that the sweaty stench they conjure during performances has made them stand out from other bands in town.

They hope with the release of their upcoming EP, along with a West Coast tour booked from November through December, that things will start to fall into place.

“I continuously have to remind myself that we are a new band and all good things take time. I am constantly obsessing over what to do next or how to improve what we’re doing. So maybe another goal of mine will be to enjoy my band for what it is and spending time with the boys a little more,” Johnson said.

During the band’s tour, they plan to start selling merch, write new material, and maintain constant and consistent growth. “I also would like to continue developing our sound, there’s always room for improvement,” Barker said.