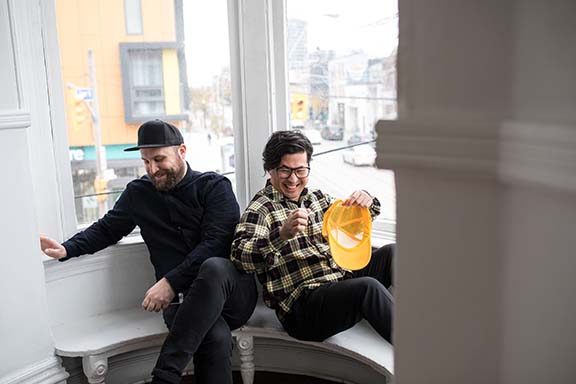 A unique, audience-involved performance is taking place at the Wild Buffalo House of Music on Oct. 10 with Choir! Choir! Choir!, who will be performing Journey’s “Don’t Stop Believing” and other hits from the 80s with the entire crowd as part of their West Coast tour.

Their act is an entirely participatory experience, which includes a great deal of communication with the audience, cracking jokes, and performing well-known choir covers with everyone in the room.

In addition to their tours across Canada and the U.S., Choir! Choir! Choir! plays weekly shows in their home city of Toronto, Ontario, as well as tributes to deceased artists and commemorative shows for recent tragedies, like a vigil for the Pulse Nightclub shooting in Florida.

Because of the wide range of venues, audience dynamics and experience levels, Choir! hosts Daveed Goldman and Nobu Adilman have become masters of accommodating their crowd to create a unique experience for every show.

“We are always shifting to fit the needs of the audience,” Goldman said.  “Whether it’s a song selection, length of sets or how deep we want to go into a certain artist, we have to gage all of that depending on the crowd.  Being nimble was harder at first, but we don’t feel as nervous about that now.  We have a high ‘batting average,’ but you have to be a sort of psychic in that way.”

The duo prioritize the emotional experience of a show over technical skill or specific songs.  Rather than creating heavily complicated vocal sections for the crowd, they make sure that the experience they produce is accessible and enjoyable for everyone.

“The audience is a big part of the show even when we aren’t singing,” Adilman said.  “On an ideal night, the audience is talking back to us and making jokes as well. If we suggest something they disagree with, they’ll jump in.  One moment someone is in the back of the room, and suddenly they’re on stage because of something they said.  The stakes are so low, and it’s really all about creating a community and having a lot of fun.”

The origin of Choir! was organic and came without intense planning.  The duo had known each other when Goldman was running a well-known restaurant amongst musicians and creatives in Toronto, and Adilman was a patron.  Their first performance was at their mutual friends’ birthday party on a whim, and it wasn’t until several years later that they decided to officially join forces and start playing their interactive shows.

Now, the duo have played over 1,000 shows together in a wide range of venues.  Between small bar shows to a Prince tribute performance which incorporated 1,999 people, Goldman and Adilman have grown considerably in their ability to work with the audience and create unique experiences throughout their career.

Choir! has performed many notable tribute shows for famous musicians, their first being David Bowie .

“The Bowie performance was our first tribute, and it was clear that a lot of people were feeling the loss,” Adilman said.  “It’s a moment when people are collectively grieving, and you could really feel the emotions on people’s faces.  It felt really good for all of us as David Bowie fans to be together.”

A large part of their success over the years has come from the unique, cathartic nature of the duo’s shows.  Goldman plays guitar to accompany the songs, and Adilman conducts the audience.

“It’s a fun project, it allows us to do something new every time,” explained Goldman.  “It never gets stagnant.  The project is really taking on new life all the time, so it’s always keeping us on our toes.  Even in doing a show we’ve performed already, we think we know what we’re doing and then we learn something new about a different kind of audience.  If you don’t have that type of chemistry, you’re not going to do over 1,000 shows, I don’t think that you’ll make it that far.  The fact that we’ve been on stage so much together serves as a testament to how fun it is.”