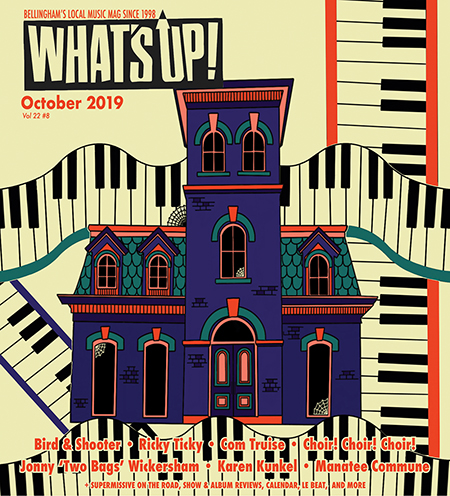 So, here’s a thing. Remember when we did the annual What’s Up! Awards Show? I discontinued it a few years back when I decided to put my energy towards other things. Well, inspiration has struck and WE’RE BRINGING IT BACK Jan. 18 at the Wild Buffalo! We’ll be hosting the 16th What’s Up! Awards Show with six of your favorite bands (to be announced in the November issue) and you’ll see a ballot in the December issue. All voting wil be online (and be aware from the start here: our mechanism to catch cheaters is like a wicked web of self-righteousness, so it’s not going to work. It’s always fun to catch the cheaters. Hi [band that shall not be named]! We still remember!). Winners will be announced the night of the Awards Show in between band sets. It’s always been a hell of a party and a great way to shake off the winter dulldrums. The date is set, let’s rock it.

AS IF THAT WASN’T ENOUGH! We’re working on the mag’s 22nd Birthday Celebration, hitting the schedule in late March or early April. It’ll be another blowout similar to the 15th birthday celebration – a full day of free local music throughout the town. It’ll be from morning through night, wall to wall local music good times! More details to come, but get stoked.

Lettered Streets have just released a new album and I haven’t had a chance to listen to it, but I’m looking forward to it. Why? Because youngin’ Jack Szankiewicz is playing drums! Jack is the son of Henry Szankiewicz, who, unbeknownst to him at the time, had a major influence on me when I first moved to town… because he was so talented and doing amazing things in the local music scene.

Clean Clocks, Charley McCoy and Aaron Ball’s new band, is painfully close to releasing their debut album. Charley and Aaron are old school Bellingham and if you’re familiar with them, you’re probably thinking, “Oh cool, the album will crush my skull.” Oooooh, but wait my friends, this is not the case. The boys have matured and brought in special guests (like Kristin Allen Zito!) to create a beautiful and engaging record. Look for a firm release date very, very soon and then hold on to your butts!

Marv have released a new record. I haven’t listened to it, but I will. And when I do, I’ll smile… because Marv’s music rockssss.

Mr. Aaron Guest (aka A. Guest) has finished up his second EP with the goods off to get mastered. With Polecat not doing as much as they have in the past, Aaron has been putting his creative energy towards his solo work. If the new EP is anything like the last (and, seriously, why wouldn’t it be), then the music will be solid awesome and a hell of a good listen. Aaron Guest (aka A. Guest) = solid awesome.

Vervex is about to release some new music… which we’ll talk about because he still lives in town. In mid-February, he’ll be heading out on a forever road trip/tour and I’ll cry myself to sleep because Jake is the best. Seriously, check out his music, it’s so good.

I got a message from a band called Them Folkes, who are starting to play around town. They have an album’s worth of material and it’s some badass rock ’n’ roll, which means they’ll fit in justttttt fine. I have a feeling you’ll be seeing a lot of this band in the coming months.

Keenan Ketzner, a What’s Up! contributor for yearssss and a musician under a bunch of different monikers, will be releasing a new album shortly on Gauzy Vox. I think it’ll be the most creative, yet straight forward work Keenan has done, and I’m really looking forward to hearing it and seeing it be released to the masses. Keenan is a mainstay here at the mag and I appreciate the hell out of him.

Kristin Nelson (booker at The Firefly) and Brendan Silk (soundman/operator of Silk Sound) have teamed up for XTRA Productions, a laser focused visual production company. What’s this mean? They do cool things with lasers during shows. LASERS! The duo have just started with their debut Yip Deciever Alt Library show. Watch for more details.

Cat Valley will be releasing a new video this month. Check out their facebook page for more details. I don’t have a ton to add to this info, other than I’m stoked to see it.

Have you checked out the new Cop Talk video? VERY cool. Overall local bands have been putting out some damn interesting vids.

The Wood Sisters are in Europe as I write this… who are the Wood Sisters? Well, if you’d asked me a month ago I would’ve told you I have no idea. But, I have been enlightened to their awesomeness and now you will be as well… they’re three local sisters who create soulful acoustic sounds… when they get back from Europe, you should check them out.

Have you heard the Mary Anns yet? Just put the paper down and go listen to them. That’s all I’ve got to say.

Razzleberry are at Play Along Studios to record their debut full length. The band has fallen off the radar a bit lately, so I’m hoping this means more shows are on the horizon. They’re a ridiculously fun band to hear and I like hearing the fun.

Beautiful Freaks are woodshedding these days, working on new material for your delightful ears. James (of the Freaks) said they’re also, maybe, possibly, could be releasing a tape of demos after the new year. Maybe. Please? They’re also about to release a new video so watch their fb page for details.

Mr. Feelgood and the Firm Believers will be hosting drum auditions this month as their drummer has moved on south (pour one out). If this interests you, go ahead and check out the band’s facebook page for more details.

Have you listened to the Spine Readers yet (one of the best names in Bellingham by the way). It’s three-quarters of the Illogicians with Sean Meyer (Marv/Guillotine Eyes) which means it’s gonna be weirdddddd… super weird, weird-o-land-weird. Brilliant weird… Sassy weird… stoked. They’ll be playing a Halloween show at Gruff with Smooth Kiwi – a multi media extravaganza, which means it’ll be just on this side of epic. Sean has told me “everyone is invited,” which I thought was nice.

Aaron Kawaguchi has left the state, moving to Brooklyn (which is pretty fantastic)… unfortunately, that leaves Supermissive and Bird and Shooter down one badass keyboard player. Not sure what each band will be doing to remedy this little issue, but here’s hoping it happens soon and there aren’t any hiccups with them playing shows.

Stone Jones and John Rentschler have teamed up for the Bloodshot Travelers… the duo are looking for more band members. If you know either of them and thought, “Huh, I’d like to play music with Stone and John,” well, here is your chance!

Hambone Wilson has moved away. His house is for sale and the dude is moving back to West Virginia, where he already has a new band that’s making headway in the blues circles. Hambone has been kicking around here for yearsssss and it’s pretty wild he won’t be around anymore. Best of luck to ya!

Animal|Inside has a couple of shows at The Firefly this month (check calendar for details). It’s been since February that the band has played in town (they’ve been hitting the Seattle scene hard), so now’s your chance to show them you love them.

Welp, the Halloween covers show at Make.Shift will be ending after this year – so no more awesome cover bands which morphed into super awesome bands (Lipstich, I’m talking about you). Not sure the scene on the Valentine’s Day show, but wouldn’t be surprised if that’s the last one as well – so start rocking some covers! Oh yeah, it’ll be Oct. 25 at Make.Shift. LIVE IT.

Each October, The Pickford Film Center presents DOCtober, a series devoted to documentaries from all over the world. Snuggled within are music documentaries! Here are some of the music docs you should check out:

• After So Many Days (Oct. 27 and Oct. 30): After making music together for a decade, singer/songwriter duo Jim and Sam got married and decided to hit the road and play one show every single day for a year.

• Boy Howdy! The Story of Creem Magazine (Oct. 4 and Oct. 13): When it launched, Creem brashly dubbed itself “America’s Only Rock ’n’ Roll Magazine”—much to the chagrin of Rolling Stone–and proceeded to run roughshod over music journalism for two decades. Sex, drugs, rock ’n’ roll—Creem had it all.

• Chulas Fronteras + Del Mero Corazon (Oct. 10): Les Blank’s 1976 documentary about life on the Texas-Mexico border as seen through the eyes of prominent Norteño musicians has been lovingly restored and paired with the complementary mini-doc by longtime Blank collaborator Maureen Gosling.

• Gay Chorus Deep South (Oct. 6 and Oct. 21): If you’re the San Francisco Gay Men’s Chorus living during a rise in fresh anti-LGBTQ+ bigotry, what do you do to combat it? You take your show on the road to the Deep South. What they find when they get there will surprise them–and you.

• Gordon Lightfoot: If You Could Read My Mind (Oct. 5): Gordon Lightfoot, Canada’s greatest songwriter and a musician who even Bob Dylan looks up to, gets the rock doc treatment. Unsurprisingly, he’s as astute, engaging and easy on the ears as his many hit songs.

• Making Waves: The Art of Cinematic Sound (Oct. 25 and Oct. 28): Not just for film nerds, this film takes us into the heard-but-unseen world of the sound designers responsible for Hollywood’s most iconic hits. You’ll never hear a movie the same again.

• Say Amen, Somebody (Oct. 13 and Oct. 18):  A richly entertaining journey through the history of gospel music that will have you on your feet and wanting to make a joyful noise, even if you haven’t darkened the door of a church in a month of Sundays.

I hope everyone has a safe October and we get hit with tons of cool fall storms. It’s my favorite month of the year. Thanks for supporting the mag, enjoy some shows, and see you next month.