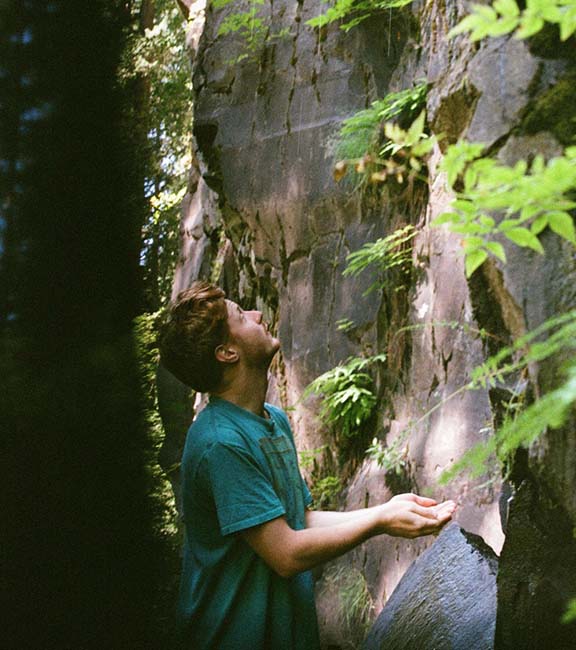 Since 2014 Grant Eadie, aka Manatee Commune, has been producing festival worthy electronic music – initially out of Bellingham and now out of his adopted hometown of Portland. While he’s flirted with high levels of music scene success, it’s only now that he’s seemingly coming into his creative own where it sounds and feels right to be in his head.

After spending the first years of his career in Bellingham, Grant moved to Portland a year and a half ago. “There was a really beautiful studio opportunity for me. The opportunity to work in the space all day, every day,” he stated, adding, “I’m surrounded by other musicians and artists all day long.”

But this isn’t a story about a young musician moving to the big city and making it huge, instead it’s one of trials and tribulations, creative dead ends and the wonderful world of epiphanies.

Manatee Commune started six years ago when Grant stormed onto the scene as a 20-year-old. At the time, ODESZA was beginning to blow up beyond anything anyone could imagine. Much like when Death Cab for Cutie blew up 15 years before and suddenly Bellingham’s music scene sounded like a million Cuties, so too did Bellingham’s sound change after ODESZA. Caught within that was Grant, a remarkably talented electronic artist whose passion for his music showed on stage as he played his sound, mixing in guitar and violin live. There was a sense within the music community that he was the next musician to blow up – right from the beginning there was a ferver, an energy, that came with his performances. Soon he was playing regularly in Seattle, even selling out venues. From there the progression was natural and obvious; he signed to an electronic label and started to tour. The next one to blow up wouldn’t take a decade and a half like it had between Death Cab and ODESZA, it was already happening. It was here and the future was Grant Eadie.

This momentum carried on for a few years and then the darker side of commercial and creative potential began to creep into Grant’s world. Between becoming a full time musician and moving to Portland, what had been a source of fun for Grant became incredibly difficult.

“When I got here (Portland), it was deeply humbling,” he said. “It didn’t matter that I’d played all these shows. There are so many touring musicians in Portland. It was really disheartening at first – I didn’t realize how much my validation was needed to create.”

Grant had gone from a big fish in the small pond of Bellingham, where he could walk the streets (or work at Mallard Ice Cream) and people would know him and love him. He was the king of the scene. In Portland, that was all gone. Coupled with the new surroundings was the fact he didn’t have a job outside of music.

“Having my finances tied to my creative energy was one of the worst things I’ve done to myself,” he said with a slight laugh. “I moved to Portland a little too fast, I wasn’t financially prepared,” adding, “Adult life started to catch up to me. It really affected my unbridled joy with making music. I made it really hard to activate the creative part of myself.”

While feeling in a creative lull, Grant managed to finish PDA, which was released last spring. By then, he was creatively exhausted, overwhelmed and needing to work on the business side of music, something that took on an added importance. Already in a rough mindset, he hit the road, touring on his own and also  opening for Geography. What should have been a glorious moment for him – playing his music for thousands of people – didn’t feel as creatively engaging as he had hoped. It didn’t help that he got sick.

“I took a red eye (to Chicago for a massive festival) and got sick for two months. I went to the doctor, etc. It laid me out. Having the post tour depression, coming off the record, getting really sick, I fell into a bad headspace.”

But, as the saying goes, it’s always darkest before the dawn. Physically recovered but still not in the right headspace, Grant played the Shambala festival in Canada to 1,500-2,000 people. “It felt really good. This is what I want to achieve – it’d been awhile since I felt that – summer meltdown 2018.”

Then he played the Imagine Festival on Orcas Island at Doe Bay last month and he had an epiphany that would lead to joy coming back. “There was something about the energy there that was extremely important,” he said. Grant realized he had been approaching music, for lack of a better term, wrong.

While the epiphany was recent, it had been building throughout the summer. “The last few months I’ve been working on stuff I’m really excited about. It’s just me making things that I love – that’s been really exciting. It took me having a mild ego death. This is part of the growth of being a person. We go through these big waves – that first big up that I had in 2016, 2017 – that feels like my younger self,” adding, now, “I’m a musician to be a musician instead of being a musician to blow up.”

“I was rushing so hard the last three years to make the record that would blow up. It was really niave – you just have to make things to make things.” He added, “I was trying to manufacture myself – this sound or what I think is going to make me blow up. This isn’t effective. I need to trust my own tastes and make what I love. When you get to that space, you end up taking the best art. I just want to make things that I like and learn things about my own creative energy.”

What that sound will be is yet to be heard, but initially it’s more dance music with ambient tones. “I’m stepping into the 80s quite a bit, I’m loving it so much. I just got a really nice 80s synthezier.”

With a new direction is in the works, Grant’s passion for live performances hasn’t changed. “When I play shows I love getting down with people, I love dancing around like an idiot. When people go to shows I really want them to dance themselves clean.”