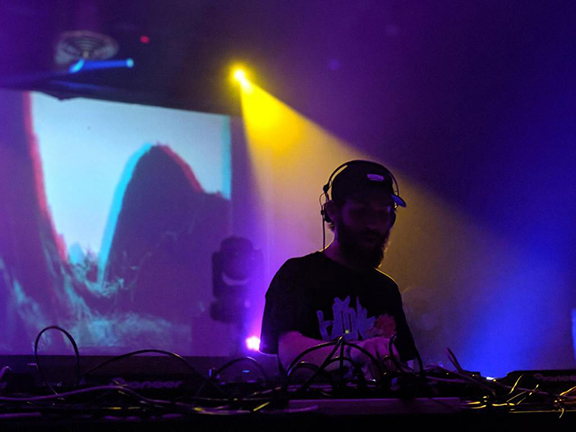 Caleb Mccoy aka Ricky Ticky aspires to give the community the good time they’re searching for. The house and club music artist generates a sound that is captivating, explosive, and a lot of fun (and I don’t put that lightly).

The purpose for this project is to deliver songs that make people move and feel good. While Mccoy likes to play harder music, he also enjoys balancing out the more serious and hefty tones by swapping in some funny samples to keep the mood more playful.

Mccoy hasn’t been shy about putting his music out there by seeking out opportunities to play live. The set for the books was the night he and his friend, James Salley (Salleymane), opened up for Dr.Fresch at the Wild Buffalo.

Due to lightening that caused the Wild Buffalo to lose power the night the show was intended to take place, the show had to be rescheduled. As a result, some last-minute changes had to be made.

“We found out 24 hours before Dr. Fresch would go on stage that we were opening [for] him… Dr. Fresch is one of the biggest names in house music. He’s a legend in our book. We got to throw the biggest party possible with him with 24 hours to prepare…” Mccoy said. “James and I ended the set with our own songs. It was the first time I played my own songs for a room full of people I didn’t know. We wanted to show everyone what we are about.”

Another opportunity presented itself when Mccoy and Salley were chosen to open for SkiiTour. Though the Dr. Fresch show left the two producers beaming, they plan to take this upcoming set above and beyond any set they’ve mastered before. With it being Halloweekend, it’s a no brainer that Bellingham wants to party. Mccoy declares that this back-to-back set will deliver not just the party but the high-energy that SkiiTour deserves.

The duo has put in a lot of thought and preparation for this night since finding out they were booked in early September. They want to give the audience a good time; so they are selecting all their favorite club bangers while flawlessly mixing in some fun and fresh originals. It will not be a show where anyone will want to stand still in the back of the venue because it will be impossible to not dance to what they’re bringing to the table.

As of now, Mccoy is hyper-focused on his continuing to grow his project under Ricky Ticky. Yet, Mccoy doesn’t plan to produce only club and house music. He has another unreleased project under the name Walcott.

He doesn’t plan to expose Walcott anytime in the near future, as this is a very recent idea. The purpose for this project serves more as a personal outlet for emotional release and creative expression. Mccoy doesn’t want to restrict himself to only one genre.

Instead, he’s challenging himself to step back, branch out, and release something that will pick a different part of the listener’s brain. The Walcott project will not disappoint when it does get released.

For as long as Mccoy has been producing music and playing live sets, he’s grown confident in finding his way in the electronic and house music scene. While every artist has experienced a period of questioning themselves and their process, it’s valuable to keep experimenting and form something that feels true-to-self.

“Everybody has this idea of how you’re supposed to produce music but everybody is going to be different. Everyone is making different styles of music; everyone is dj-ing a different way. There’s no right way to do anything artistically….” Mccoy said. “The best way to make art is to not f#cking listen to anybody. You have to learn it yourself because learning someone else’s way is taking you straight off coarse of what you originally wanted. Doing it ‘wrong’ is paving way for creating something new.”

You won’t want to miss Ricky Ticky and Salleymane’s B2B opening set for SkiiTour on Oct. 26 at the Wild Buffalo.