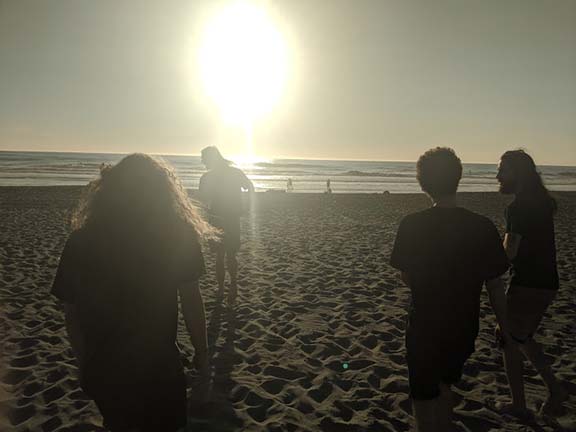 Yeah, tour was weird. We started early enough on making contacts and booking shows that when the time actually came, we almost had an idea of what the month was going to look like, and only four shows had fallen through. You know, barely a negligible 25 percent-ish of what we started with. And after an entire summer of recording, practicing, recording some more, recording for other people, over-practicing and then pushing for one last round of recording, the delirium had more than set in, our money had more than run out and we were ready to live in a car for a month. Turned out to be a great time.

We kicked the tour off by playing the Greenwood Music Crawl where the Angry Beaver hosted us. Five venues in the Grseenwood neighborhood of Seattle got together and reserved the central blocks of the neighborhood to host 45 local Northwest bands. They even gave us a sweet goody bag complete with little plastic dinosaurs. Four, to be exact, so one for each of us except Aaron. After the show, Isaac’s parents hooked us up with a sweet tour wagon and we started the zig-zag “down” the coast, which picked up with a show in the opposite direction four days later. Here at Supermissive, we’re all about streamlining. The Toyota Sequoia truly was the ideal tour vehicle – we’re pretty sure that thing has a v20 in it, and the sound system did justice to Biggy, the Robert Glasper Experiment, Queen Guzzard and the Buzzard Wizard, Jamila Woods and the like. There was even enough room to not completely suffocate from the incessant vaping. Seriously, the vaping…

After that new low, two of the Supermissive dooders have stopped vaping.

On the first big stretch of the tour, the Black Lab Art Gallery in Everett hosted us, along with Laser Beam and Reptile Brain. On the following day, The Tacoma Dome house venue in Seattle threw us a show with Forest Ray (heroes) and our friends Smooth Kiwi from Bellingham. It was a pleasant, sweaty basement show. We met some awesome people and took some hilarious selfies with our new “fans.” Side note, the drummer for Laser Bream is also the singer. And they have vocal pedals. And great makeup. Real casual. Check them out.

By this point we had already resigned to the fact that we had to kick off every show by playing “Infest the Rats’ Nest” over the sound system, because King Mackenzie Wizard are at least as good as the amount of sleep we weren’t getting. We started the show in Portland at Growler’s Taproom the same way, followed by some awesome sets from our friends and Portland locals, Mobilities and Red Forman. Mobilities’ set was even more fun than the show we played with them at the Alternative Library back home a few months before.

Then came the part of the show where Spissive once again exhibits their proficiency in streamlining, and heads back North. Though in all seriousness, this show was way more than worth the logistics. A few weeks before, the Psychedelic PornCrumpets somehow found their way to our contact and invited us to play a show with them back in the Ham. We’ve been big fans of theirs for awhile. That show was the most packed any of us can remember seeing the Shakedown in the few years we all have been playing shows there. The Porn Crumpets played a tight set, and we had a good time – even though Isaac opted not to wear the beaver skin they did for our previous show there.

During load in that day we threw down and challenged the Crumpets’ front-person Jack to a little chess over the interwebs. To which he still hasn’t responded. Not even bummed. At all.

Then came Californy. The big one. In all honesty, there was barely enough Wizard Gizzard to go around for that trip, but we made it. The first show lined up was in Oakland at Oakland Secret, a wombo combo antique shop/music venue where we got to play with Ratz on Acid and Sword Tongue. Sword tongue opened their set on a crazy drone over a drum machine, with trippy vocals and some seriously nice gear. We made great friends with the Ratz, who’s massive two-piece set included irresponsible helpings of gong and shreddy vocals. We played with them again the following evening in San Francisco. Both doods were named Mike, and that was hard. Check them out.

That night, delirium engulfed the entirety of our adventure out into this cruel, cruel world. The plan was to wrap up the show, make some friends, have a time, vape, and then go find a nice quiet place to camp. Turns out Californy campsites aren’t very free and we had no idea where we were going. We drove an hour outside of town and into some random hills, v20’d up a hilariously curvy road, and found an ‘aight place to camp kinda. We started unloading and nearly finished setting up the tent when we realized: we left a phone at Safeway, in town, and it was 3am. With smiling (haha) faces we packed the tent back up, crawled tooth and nail back into the car, and v20’d back. By the time we got there, three of us had fallen asleep, and conversation between the other two had devolved to a sparse series of grunts and begrudging nods. After a quick search through the blinding chaos that is Safeway, we found the missing bag that once contained the missing phone; but, no phone was found. Turns out, totally in the car the whole time. Moving right along.

It then took us almost 15 more excruciating minutes to decide that surrender was the only option. So, we slept. Aaron slept folded in between the front and back seats, flattened against the floor of the car. Isaac slept in the passenger seat with their legs up on the dash. Will slept in the captain’s chair, with the steering wheel planted squarely in the middle of their brains, Sam slept in the back, curled into an uncomfortably fetal sleeping position. “Other” Will locked himself up tight in the roof rack. Snug.

The following day, we woke up with absolutely no hope of escaping the delirium and immediately starting our journey to San Fransisco to play a sweet venue/art gallery called The Honey Hive. Before the show, we adventured through Golden Gate Park, eventually taking some sweaty naps in the sun and regaining a small amount of the energy wrung from our beings the evening before.

Playing in San Francisco was awesome. Before the show we frolicked on the beach, dug our feet into wet sand, and chugged Yerba Mate. You know, so we could go from fried to tweaky. We shared that sweet sweet show with Noisy Minority, Dirt Parade, and our best doods from way back Ratz On Acid. Check them out.

Afterwards, a family friend of Isaac’s put us up at their real nice place in the hills and we woke up outside on their back porch to an unprecedented decrease in delirium. Wow.

Due to the lack of actual shows successfully booked in Californy, we drove up North once again to return to the Ham for a week of somewhat intensive practicing and recording. Because that hadn’t already been done for weeks before tour. We were hoping to improve upon some of the issues with our performances over the first section of tour, as well as finish up some additional recording for our upcoming album, Sounds for Sore Ears. An interesting thing about touring: You play a show, and inevitably find a flaw in your set, and then you do the same set with the same flaw over and over and don’t practice the flaw out until it’s over. Great time.

We then left for the final leg of tour, which took us back down to Portland, through Eugene, back up to Bellingham, and ending in Seattle. Once again, we are professionals when it comes to logical thinking and streamlined booking. Lol. In particular, we had some great shows in Bellingham and Seattle.

We were joined by Portland group WEEED and our dear friends Forest Ray for a night of psychedelic nonsense in Bellingham. The Alternative Library hosted, and it was magical. We had been hoping to play with WEEED for sometime, and were quite impressed with their set. Check them out.

The following evening, we played in Seattle at The Blue Moon Tavern – what a wonderful place! Joined by punks King Sheim and indie group Public Pool, the night was full of intoxicating variety. We enjoyed ourselves, made good friends with the fairytale sound person, and closed out what was the final Supermissive set with the band’s current members for quite some time. As we write this, Aaron is about to leave for The Big Apple, and Kris will soon be going to Los Angeles. It is a sad time, full of change. Within that change, we have hope. Hope for a Fall and Winter full of writing, practicing and recording, with some shows sprinkled in there. We long to be back on the road in February in support of our upcoming album.