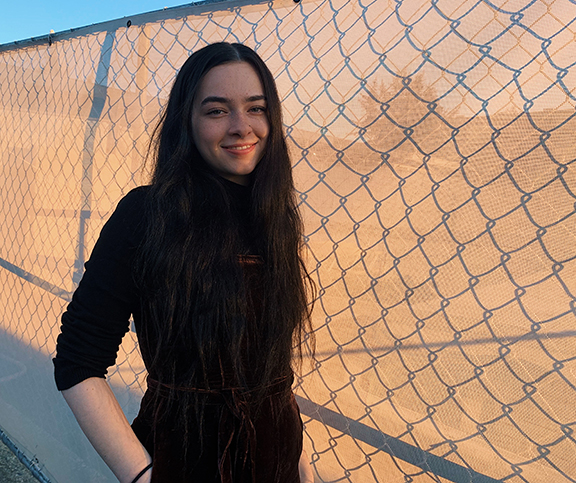 Kacey Lind has found herself with a dream opportunity. The 19-year-old singer/songwriter and 2019 Sehome graduate has been asked to play a few songs with Ken Stringfellow during his show on Nov. 9, then open for and play songs with The Posies in December. An up and comer in the music scene, we felt this was the perfect opportunity to introduce Kacey Lind.

Tell us a bit about yourself. When did you start playing music? Who are your influences?

I’ve been into singing as long as I can remember, but I started teaching myself piano and writing my own music early on in middle school. I also taught myself guitar in 8th grade. I started performing around Bellingham when I was about 15, starting at Open Mics at the Green Frog! I started recording and producing music more seriously around my sophomore year of high school and that has been something I continue to work really hard on and enjoy.

My influences are pretty all over the place. I used to take a lot of influence from the Lumineers, early Ed Sheeran, Rex Orange County, Daniel Caesar, and then I became more band oriented when I started writing music for my first band and I took some influence from the Arctic Monkeys and Cage The Elephant. Lately I’ve even been influenced by some freeform jazz. I don’t look to many artists with how I write my music, though. My process is pretty random and whatever it comes out sounding like is pretty unpredictable for me. I guess I play alternative music that you could consider “indie.” Also sorta jazz inspired, especially with my most recent song “Easier.”

How did you connect with Ken for the show?

Ken reached out to me over email that I received when I was in New York for a trip! I later found out that someone who has seen me play live around town and had some kind of connection to Ken had mentioned me to him. He sent me music to learn and we’ve emailed back and forth a bit about the shows!

How long have you been playing live? Does anyone else play live with you?

I’ve been playing live since I was 15. I started with random open mics and created some connections in the Bellingham music scene that way. I almost always play alone, with my guitar or piano, but very recently I’ve began looking to play with more people. I became a part of my first band in February 2019, and it was an incredible experience, even though we only really played live in front of a crowd once before we broke up for college. I sang lead and the guitarist and I wrote most the music. I also ended up playing a short set live with just the guitarist from that band, Ericson. He played guitar and I just sang, and it was really fun. I’m definitely looking for more experiences with a band or any other musicians. That’s definitely what I want my next steps to be.