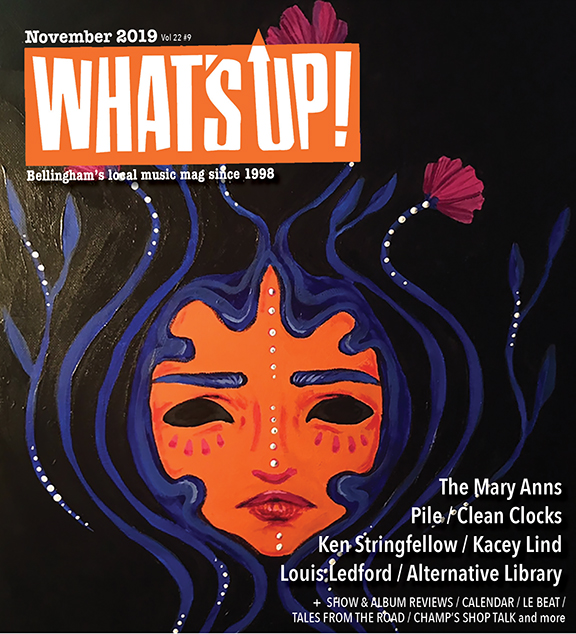 Hi. Welcome to this month’s edition of le beat, where I talk about stuff happening in the music scene (side note, if you want to be mentioned on this page, shoot me a message).

First off, as always, to the What’s Up! stuff. Our Awards Show, slated for Jan. 18 at the Wild Buffalo, will include LipStitch, Supermissive, The Rhetorician, The Blood Capsules and more! There will be more details and a ballot in the next issue, so be ready. For those who are new to the awards show scene, there will be about 10 or so music categories with five nominees in most of those categories. You’ll be able to vote online for your favorites. Winners will be announced at the show! We’ll have presenters in between bands giving  out the awards and it should be a wild wild time… it always is.

ON TOP OF THAT, we’ll have the mag’s birthday celebration in the spring, but details on that are still being sorted… more soon.

Before I wrap up my nonsense for the month, I want to thank Emily Thompson and Chris Butcher for being amazing interns over the summer and into the fall. There are a bunch of great writers working for the magazine right now, including those two, plus Keenan Ketzner, Logan Portteus (who went above and beyond this month), Halee Hastad (who again bailed me out), Bella Cole-Preciado and Caitlin Cohen… among many others who will write reviews or the occasional feature. Getting to work with the magazine’s staff month after month, year after year is one of the great joys I have in life. It’s amazing how writers I have loved working with will move on, sometimes they’ll come back… but no matter what, new writers come in. Their devotion to the music scene and the craft is always inspiring, so thank you all.

Welp, enough lovey dovey stuff for now, on to music.

The Neighborhood Spaceman, which features Bart Stull and Shea Hagan, have put out a 16-minute song of worthy improvisational music. Having known Shea for years (formerly of Ship to Ship), I figured it would be fantastic… if you wanna get weird, give it a listen.

Schemes has a new EP out, recorded with Erik Wallace at Shibusa Sound. It’s a tight little three song nugget of alt rock. Hopefully the band will play and tour more in support of this.  They’re a damn good band.

Island Gigantism, a couple transplants from Ohio, are releasing new music on Nov. 10 at The Shakedown. Also on the bill are Magnolia Baseball and The Mary Anns, who we have as the local spotlight this month. In a not easily seen way, they remind me of Ween – kind of an “anything goes” type of band that’s not afraid to test different corners of sound.

N7E, along with Skinnerd’s Picks Presents, are releasing Punk Rock Giants of the Pacific Northwest Vol. 1 featuring Boxcutter PNW, Car 87, Lad of Wolves and Potbelly! Glad the label is putting something out… I miss Robby.

Cop Talk dropped a new EP at the end of last month called Pulp. It’s awesome, that’s all I need to say. That and go listen to this band because they’re fantastic.

Louis Ledford has released Actually and it’s magnificent. He is one of my favorite songwriters in town, and this record is full of soul and beauty, darkness and joy. Listen to the record, you’ll be glad you did!

Ex Nihilo, (the bi-coastal metal band) have been recording and are planning on releasing some music via a new label out of the UK. Guess it’s a new label that was soliciting submissions and when Ex Nihilo sent them some songs, they fell in love with the band. And how can you not love Eli and Austin?

Lonely Together had their new song, “Energy” played on KUBE out of Seattle. This is a huge accomplishment for the band and something they can build on. Love how hard this band works, their social media presence and shows are a testament to what they can do. Speaking of Zak Cook (half of the band along with Rosie Matsumoto), his solo project, Safe Trvls has also released a new song, titled “Too the Moon.” Hard work = good stuff.

Road Virus have released Bite Night on Big Hare records (the label’s fifth release). The music was made for a horror film by Elliott Glasser (which premiered at Bleedingham) and turned out so well, the label decided to release it!

Did I mention Hambone Wilson has moved out of town? He moved back to West Virginia, but recorded a new album with a new band before he split… the album is getting major label interest.  We wish Hambone the best of luck.

Mickey Wells from Bellingham Girls Rock Camp has joined up to play bass on I Love You, Alive Girl. They’re working on writing for a new album, watch these very pages (or their facebook page) for more details. Mickey is the best, so I’m stoked about this band.

The Alternative Library celebrated their 12th anniversary last month… unfortunately, they were also told they’d have to move out of their current location. Read on in the mag and you can see our story about it.. Gonna be interesting to see how it all unfolds.

I’m always stoked by how much Hot Damn Scandal tours. It looks like they’re on the road again this month, heading down the West Coast for a series of dates. If you tour, you get better as a band, it’s as simple as that. This band is fantastic – one of the reasons? They tour. A lot.

Looks like Mallard is doing music once a month. Haven’t seen who will be there in November, but heard their October show with Bobby Petite and The Mary Anns went over well.

Soundgarden has been nominated for the Rock ’n’ Roll Hall of Fame, which means Hiro Yamamoto (the band’s original bass player and current member of Stereo Donkey) might be inducted. How cool would that be? I wonder if you get a certain color jacket like the Football Hall of Fame… that’d be awesome.

Have you checked out the new Cat Valley video, “Summertime”? Sooooooo good. I’ve loved seeing more and more bands doing videos, but think every band should do one… EVERY LOCAL BAND. It’s another form of art plus another way to get your music out. And if you do it right, like Cat Valley did, then I’ll talk about how awesome you are… because Cat Valley is awesome.

Speaking of new videos, have you seen Beautiful Freaks’s new video, filmed by resident badass, Chris Butcher? Loved it, super weird video. It was the perfect video for this band. Keep it coming!

Welp, think that’s about it for now. As always, there’s more stuff going on, but it’s time to wrap this up. Be good, ya’ll.