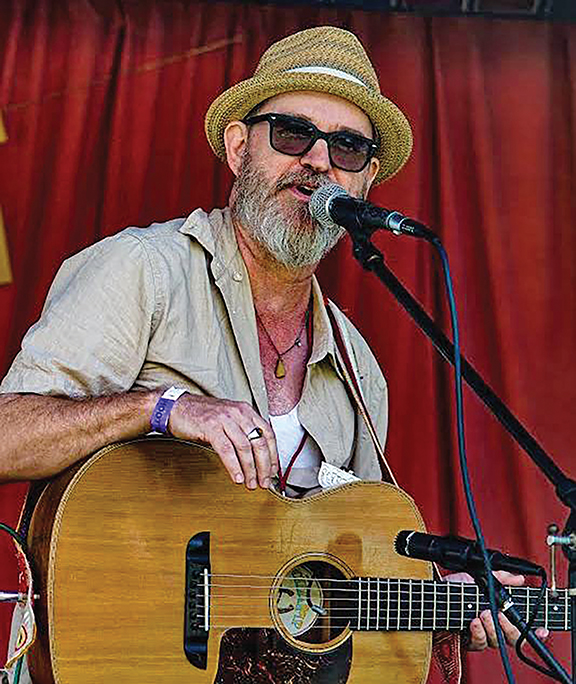 Louis Ledford had only visited Bellingham in the late summer months prior to moving here in 2011. You see, he had met Robert Sarazin Blake, the director of the Subdued Stringband Jamboree, in West Virginia in the early 2000s and had played at the Jamboree many years in a row before deciding he’d make the jump. He had heard rumors of the rain, but little could prepare him for that first long, grey winter he spent in our northwest corner.

“As I remember it, it rained hard and steady from the moment I opened my car door and stepped out that January and didn’t stop until July,” he laughed.

When the two of us spoke, late last month, it was a sunny day in Bellingham. It was late morning. Louis was brewing some tea and took a moment to pause our conversation and say goodbye to his wife.

We talked for a moment about our experiences on the Empire Builder, an Amtrak route that travels from Chicago to either Seattle or Portland. I had made the journey east from Seattle a handful of years ago and Ledford had more recently taken the train west, from Chicago to Seattle. He did it, in part, because it was something him and his father, who passed five years ago, had always wanted to do together. “It was a memorial ride,” he said.

Too, it was a trip that allowed him to work on some content he had been thinking of as part of a vision for an upcoming album. Something much more political than anything he has done before, he said. And what a better way to get into your political mind than on a train travelling through the seemingly unending plains of upper-middle of America. It’s the type of landscape that rolls on and on and on, allowing for thoughts to flow in unison with the passing of the miles. The type of landscape that Ledford, who excels in both conversation and string instruments, isn’t necessarily a stranger to, either. He has spent many years of his life travelling as a musician and has seen much of our country. This has influenced his music and storytelling nuances along the way, making him something of a modern-day, possibly more stripped-down, Bob Dylan, if you will.

Ledford travelled, for example, as one of the original members of the original Hadestown Roadshow. The production, by Anais Mitchell, has since made its way to Broadway and tells a version of the ancient Greek myth of Orpheus and Eurydice. Ledford played the part of Hades, which makes sense when you consider his husky, deep voice. He first met Mitchell at a three-and-a-half-week folk music festival in Texas and the two became dear friends almost immediately, he said. They formed a group called the Tin Van Caravan Band and travelled together with each other in the early 2000s.

“One day while on tour we were sitting in an apartment in Chicago – we had been up very late and then woke up very early – just having some coffee and Anais sort of out of nowhere says she’s got this idea to create a rock opera based on the Orpheus myth,” Ledford said. “We were all kind of like, ‘Ok, cool, but it’s pretty early in the morning for this.’”

Turns out Mitchell was onto something, and decades later the show has become world-renown.

“My congratulations to her once it hit Broadway was, ‘You must be so relieved,” he said in reference to her long journey with the show.

Ledford, too, has had a long journey with the craft. Now, at the age of 53, he has been making and playing music for multiple decades. His family wasn’t particularly musical growing up, and no one played any instruments, but he remembers his mom always having records playing around the house. He would often lay on the floor just staring at the speakers and listening to whatever was playing, he said.

“I don’t really know how listening to my mom’s records lead me to being obsessed with music the way I am, but it did,” he said. “Part of it was that it was a vocation I had some aptitude for. I was good at it.”

The writing aspect, too, has always come somewhat naturally to Ledford. Maybe more so than playing music. It makes more sense to him and is often a process both slow and spur of the moment, he said.

Some of his earliest inspirations included the Beatles and other similar bands of the 60s and 70s, even into the 80s. Still today, Ledford is listening to Brian Wilson and the middle Beach Boy period, along with a more global selection, such as France’s Francoise Hardy.

Most recently, Ledford released (electronically for now, physical copy to come) his latest work, Actually. The album was recorded in Seattle from late October of last year to April of this year. It was produced, in part, by Aaron Harmonson, who also played bass on much of the album.

“I just sort of sat down one day and asked myself, ‘How many songs do I have that I haven’t recorded?’, he said. “I realized I had enough to make a record, so I did.”

This work could be heard as more upbeat than the past releases of Ledford’s. The fourth track, “Anita,” follows the story of Anita Pallenberg, a German-Italian actress who was the longtime girlfriend of Keith Richards. Ledford recalled seeing her on the cover of a magazine when he was young and having, maybe, his first real crush, he said. Pallenberg passed away two years ago, so in some sense “Anita” is a tribute to her.

The longest track on the album, “Grand Corpulent Moon,” is arguably the most autobiographical, and was also the inspiration behind Ledford naming the album Actually. There’s a moment on the track where he is laughing and just says the word “actually,” which carried some cadence with it that resonated with him, he said.

Ledford, in excellent environmentally conscious style, found a stack of unused CDs at Goodwill that he will use to burn his album onto. The packaging will be 100-percent upcycled from bits and scraps and parts he found while working at Bison Bookbinding and Letterpress. It’s something of a tribute to the dozens of times he created and printed almost all of his own material by hand, he said. Everyone knows it’s better that way.

This album, of course, is not to be the last of Ledford’s. He has been at work with the aforementioned much more political piece and he’s hoping to sit down and record before the end of the year. It is surely something to watch out for. In the meantime, you can take a listen to Actually on Ledford’s new Bandcamp page. Too, he has every intention on staying in Bellingham and has adjusted to the wet, grey winters not dissimilar to that first one he experienced nearly a decade ago.