The dynamic duo of Clean Clocks 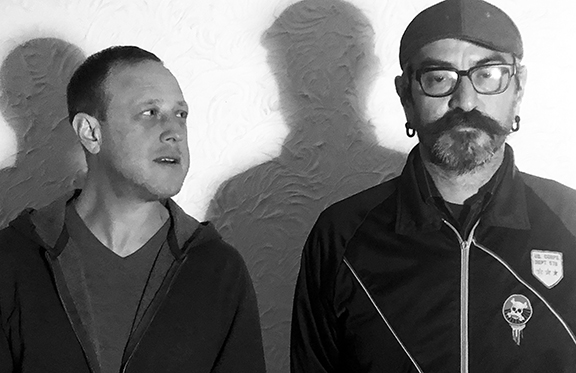 It was nearly 22 years ago when I caught Sharpie at the Fairhaven Auditorium. The band, which was fairly new at the time, was fronted by Charlie McCoy who had been in the local legends Asswipe (pronounced oz-wee-pay). It was intense and brutal and I was hooked, soon seeing them as an inspiration to start What’s Up! I wanted to tell people about bands like Sharpie, people such as Charlie. By the following summer, they changed drummers, adding Aaron Ball who helped propel the band’s sounds to heights not yet explored by local bands. They were special in the scene and special to me – two people I would become good friends with, follow through their musical careers as Sharpie inevitably broke up, watch them start families and grow up.

Now, nearly two decades after their band broke up, Charlie and Aaron have reunited and are playing music together as Clean Clocks. Gone are the skull crushing riffs, replaced by well crafted songwriting – the early 20s angst replaced by the introspection of having more years behind you than ahead.

After Sharpie had broken up, Charlie and Aaron remained friends, playing in their respective bands over the years. Charlie “retired” from music 12 years ago after the birth of his daughter while Aaron moved to Seattle and continued to play actively in bands until recently when family life became a priority. A year ago, though, Aaron and his family moved back to Bellingham and the seeds of Clean Clocks were sown.

The most obvious route for the two would be to rehash the past, bringing Sharpie, or some form of that, back to life. “We had some conversation about sound – it could be a Sharpie rehash – that’d be easy,” stated Aaron. “But it would’ve been short term. We started thinking about what if it was something different.” He added they decided early on “to burn down the ship of Sharpie.”

From there, the two began conversations that would shape Clean Clocks. There were no more distortion pedals, playing live and shaping songs in the traditional manner. The duo now were building songs from the ground up, piece by piece, sound by sound, instrument by instrument. “We spent about 80 hours tracking and mining the 12 minutes that are the EP – spent way more than 80 hours talking about it,” Aaron said. “We were trying to make some interesting voices and choices with voices – interesting choices with how we’re gonna fill the songs out.”

Part of pushing forward with the project was growing up as people, according to Charlie. “Without all the decibels and volume, it felt weak without all that power. As we started to build it, Paul Turpin, the engineer on the project, pulled me aside and said [there’s a] big difference between being vulnerable and being weak. I had to let myself be vulnerable, there was no volume to hide behind.”

While sonically and artistically, the band is light years from Sharpie, and the genesis of the songs still begins with Charlie on a nylon acoustic guitar and his lyrics. “It was important that we take Charlie’s unique lyrical approach – his voice – what he brings to the table, is a unique persona. A unique style – it was important that we continued to honor that, but surround that with a whole bunch of different instrumentation.”

As the roots of Clean Clocks’ songwriting are still largely with Charlie, Aaron’s role has expanded greatly – he is still percussion, but he also played bass, Fender Rhodes, and even ukelele during recording. In the studio, the band was joined by Dylan Reick, formerly of The Cryin’ Shame and now living in Portland, as well as Kirstin Allen Zito, of Bellingham, who provided backing vocals.

The end result of the exploration is the Dissolution EP, which comes out this month. While Sharpie had made a name for themselves live, Clean Clocks won’t be playing in front of people until next spring, instead focusing on material for their next album as well as videos.