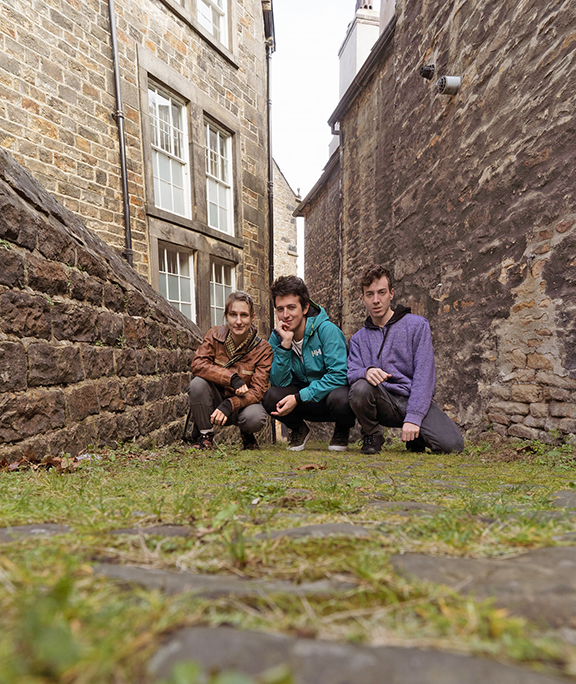 We wake up at 3 a.m., our friend drives us to the airport. We’re all really sleep deprived from staying up the night before to play Mario Kart, but it doesn’t matter because we’re going to Europe and it’s going to be awesome.

Ten hours later we’re stuck at the Toronto airport for eight hours. God this sucks. Kaeli  plays her stupid video game the whole time. The food is really expensive. Finally, we all get on a plane, somehow there’s very few people on the flight, and there’s a ton of empty seats for extra napping capacity.

We touch down at the Manchester Airport and meet up with our contact, Johnny. Johnny drives a really nice Jaguar. On the way to Lancaster while passing a bunch of sheep he tells us a little about the music festival and the city of Lancaster. The steering wheel’s on the wrong side and Johnny drives like a maniac.

The festival hooked us up with an Airbnb right above one of the pubs, and it’s adorable. The ceilings aren’t level, and it looks super old. Apparently an Italian family lived there with their children before it became an Airbnb. We’re dying to go to sleep but also, carpe diem, so instead we go to a party at a local brewery for the festival volunteers. There’s free beer and free food and lots of new faces, but we spend the whole event in a daze. Super super super tired.

This is a day off for us, and I was really hoping to sleep but I wake up at 5am and can’t fix it. Conner’s also up so we go to this big wooded park somebody recommended to us, with a massive marble monument in the middle and a butterfly greenhouse.. Butterfly houses are a really good activity to do when you’re basically braindead from sleep deprivation because butterflies are pretty and require no effort to appreciate.

I still can’t sleep by the time we get back, but Johnny shows up with the instruments the festival is providing and it turns out they’re heavy as fuck. That evening we check out an open mic and do a song or two, but Alex doesn’t have his drum set so he finds a sample kit on his phone. I think we sound pretty bad but everybody’s into it – our first experience with just how different British audiences are. We then go to a funk jam where, again, audience goes nuts, people keep buying us beers, and somebody has a bottle of moonshine so the next thing I know it’s 3am and I’m pissed (“pissed” in the UK is basically wasted.) Alex went back early because he doesn’t drink and he’s feeling kinda sick.

The first day we’re actually playing a show. I wake up way too early again, but one of the pub owners said he’d provide breakfast to the international musicians so I head over to the pub (in Lancaster everything is seven minutes or less walking distance away.) The pub owner makes me a bacon bun, which is just a bunch of ham in a bun served with ketchup and coffee. It’s all right, nothing special. But it turns out it’s the best food I’ll have all week, so I wish I appreciated it more.

When we show for our first gig, it was miserable because we had to haul all our heavy equipment on foot and there was nobody there and we were afraid we’d come all the way for a string of shit gigs. As soon as we started, though, the room filled up quickly and soon it was standing room only – they were so into it! Post show, Alex promptly goes back to the Airbnb because he’s still feeling pretty sick. Conner, myself and this Brazilian dude we’d met the day before end up going out and finding a whole crowded bar with people dancing to live rockabilly, followed by a karaoke bar where a dude who says it’s his birthday gets wayyy too comfortable with us and annoys the fuck out of me.

By now I’m starting to imitate the speaking patterns of British people and I don’t know how to stop. We have two shows, the first one starting pretty early, at this vegan cafe. It’s the same deal – we show up, there’s not a whole lot of people there, but by the time we start the room is full to overflowing. The sound was absolutely terrible but we were having so much fun it didn’t matter.

The second show is at this underground bar, and the infrastructure is terrible so just getting our instruments down there involved 12499 steps, and when we showed up, the bartender said he wasn’t expecting us for another hour. So set-up was a squeeze, but Alex gets his drums together in time, and we’re all ready, and that basement bar is so crowded by the time we started – and so hot – it was surreal. We have our new friend Becca sit in on the trombone, she’s awesome.

This is the final day for us, and the most shows. We play the main stage at noon but there’s so much rain, and it’s kind of a bum slot, so not very many people show up. I drink a beer at noon cos it’s the last day, f#ck it.

Our second show is on an outdoor stage and it’s still raining pretty hard. We start late but have a solid crowd, and we’re all having fun -  it turns out you can walk around with beer in Lancaster! What a beautiful thing. We head to the third show and set up, and by now we’re very tired but we know it’s the last show, and I’m somewhat delirious but I think that last show was the best we played.

After our set, a beatbox trio from Austria plays and turn the little pub into a night club: a ton off people are dancing in a tiny space, dudes are taking off their shirts and bumping each other with their sweaty chests, and a ton of musicians from the festival sat in with the band, including Becca the trombone player, this guy from New Jersey who turns out is a dope rapper besides playing bass, and myself. Unreal. Really really good. As the show ends and the pub empties out, Conner starts playing a melodica line and it turns into a cipher, people are freestyling, improvising, clapping, throwing in melodies – it was one of the coolest jams I’ve EVER had. I want to go back.

Oh god I did not sleep enough. We wake up super early to take the train and Alex was the one to buy train tickets, so he’s making sure we’re not late but I’m just super grumpy and I hate him a little. Finally get to the airport. Finally get on the plane. Finally get to Toronto. Another long layover.

It’s like all the lack of sleep over the week hits me at once and I just want to be home, but it’s not until a full 30 hours later that we land back in Seattle, see our friends, and play some more Mario Kart. The next day I slept until 6 p.m. and I have no regrets.