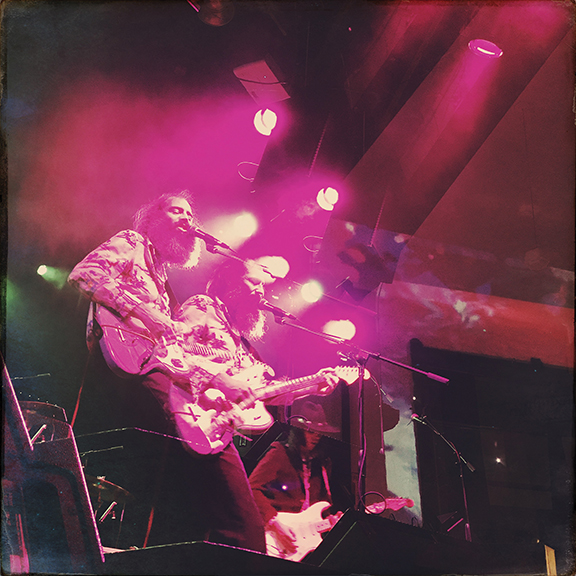 Every music fan has their favorite – the one artist whose music touches their soul a certain way. For me, that’s guitarist Ethan Miller. From his time in Comets on Fire to his current bands (Howlin Rain, Heron Oblivion and Feral Ohms), the way he plays music and his approach to creativity are a massive inspiration. So much so that my desire to keep the magazine in business began when I last saw Howlin Rain earlier this year.

Howlin’ Rain is back for a show this month at the Firefly, which means I get a chance to talk to Ethan – something I’ll never pass up.

Ladies and gentlemen, Ethan Miller, in his own words.

Who are you and where did you come from (please tell the readers about yourself)?

EM: Ethan Miller, born and raised in Humboldt county, Ca in Eureka. I’ve lived in England twice, in Oakland twice (this last time for the last 16 or so years and still) and in Santa Cruz for about 4 years in the late 90s and early 2000s. I guess I like living near the ocean~ ha ha!

You play in three bands – Howlin Rain, Heron Oblivion and Feral Ohms – and run a record label and publish poetry. Obviously, your life is full of and inspired by creativity. Tell us the importance of creativity in your life and how it molds and shapes your day to day?

EM: Trying to get my life to be more and more about creative work is something I’ve been shaping since I was a child. In some ways having your actual work revolve around your creative output is highly rewarding, in other ways it can be a bit of a challenge and a burden in that you’re no longer just trying to accomplish the work or task that’s been set out for you at your ‘job’ by a boss or a structure outside of yourself, but you’re also trying to constantly invent and reinvent the work and tasks themselves in a fashion that you think will both be true to your creative ideals, and also in a way that will engage a buying public. If things are going wrong in your job for a boss, it’s easy to say you’re doing your best and blame it on your boss or the system you work within as being dysfunctional. Well, when you ARE the boss/ artist/ product producer and in some cases the product itself, it’s a whole other self-judgment system you have to keep control. In a more structured and traditional work environment, small daily failures get absorbed into strengths and a cycle of learning and betterment much more naturally and quickly and they transform from negative to positives in your confidence/ psyche and work-life much more quickly and naturally (as they should). In a self-run creative professional life I think small failures are a lot harder on the psyche, they linger and often resonate a lot longer than they should, you take them personally and the lessons to be learned from them aren’t often as clear when dealing in art. I guess it all comes down to ‘you do the work’ and move on, and try to do both quickly and fill your life with it and remember that neither critical reception nor product earnings are the be-all end-all of the success of a creative work.

Do you remember the first “a ha” moment when you realized you wanted to devote your life to creative endeavors?

EM: I was telling stories in medium as far back as I can remember. Before I could write, I’d tell them to my mother and she’d write them down and I’d illustrate them and she’d help me bind them and sell them to family and family friends.

When was the last time you almost stopped a life of creativity? Do you have a moment when you thought “this just doesn’t make sense, I’m done?”

EM: No, for me, even if I have to walk away from a ‘career’ in the creative arts I might even get to focus more time on my creativity; in writing, photography, music, gardening, cooking etc. I thrive on creative activity. It’s just how I make sense of the world, an endless opening of little doors to stimulate your mind and spirit throughout life. They take me from one day to the next, from one year to the next, wondering and in wonder. I don’t want to live without that stimulated wondering and wonder.

If I have to leave behind a professional life in the arts and my products aren’t viable enough to keep me hanging on with music as my professional focus, then I comfort myself with the idea that at least I’ll get to create art that is untethered from social media again. I won’t have to turn each artistic endeavor and accomplishment instantly into a digital ghost to roam the vapid purgatory of the internet and social media, where no creativity exists, ever. Discovery? Yes. Creativity? Never.

Growing up, when did you first pick up a guitar? Was it love at first strum?

EM: I think I first played a guitar (acoustic) sitting in the grass with a Christian hippie dude at CSSSA (California state summer school for the arts; a month long live-in program for the arts) at Mills in Oakland, just out of 8th grade. Most of the students were 16, 17, 18 even 19 having just graduated high school and on their way to college after that summer. So they all knew shit. The 18-year-olds from the city and ‘out there in the world’ had a lot to teach a 14-year-old kid just out of eighth grade from a remote small town. Somebody took me into their dorm room and played me the Velvet Underground’s “Heroin” for the first time, lights off, candles lit. Like a lightning bolt went through me for those 7 + minutes. And never uncharged from it. I remember the smell, the air, the moments passing by and each one extending into small infinities as if it was just last night… That lightning bolt is still crackling in my marrow.

You gotta understand, as I’m sure many lifer Bellinghamians can, in the pre-internet age, growing up in a small town, I’d heard what was on MTV, what my parents listened to or what my other 14-year-old friends had heard in a small town that was 6 hours from the city in one direction and 8 hours in the other direction. We weren’t mixing with a lot of older kids and almost none of my friends had older brothers or sisters that were super music heads and high school was still a summer away when we’d start to mix with older kids that new shit. So when I hit CSSSA that summer and was mixing with older artists, outcasts, punks, hippies, radicals, creative contrarians, etc, I was getting hit with lightning bolts by the second, every day and night for a month. Like acid, I was shown that the doors were right there in front of my face, I just wasn’t looking at things inter-dimensionally up till then and once I was shown, I could see the doors of the secret world everywhere. So it was in this environment that I first played guitar. With a Christian hippie that showed me a few chords; E, A, C, G, D for starters. Nothing as lightning bolt or secret world as a lot of other awakenings.  But showing me that so little could make so much of a song happen~ that was huge for me.

Howlin Rain has gone through several different line up changes through the years but you’ve really clicked with Dan, Jeff and Justin. Why is this line up as special as it is?

EM: I’m not sure why sometimes you get a group together that has great chemistry and you feel like the right people have come together but life or personalities pull them apart pretty quickly. And in other instances you manage to stay bound. Perhaps we’ve had the patience to work at staying bound and a mutual interest in what each of us brings to the table. I honestly don’t know, its all more alchemy rather than chemistry as far as I can tell. Or maybe vice versa. I’m just thankful that we’ve had the time and energy for this line up to grow and begin to fill out it’s wardrobe together, it’s been a joy to hear the band begin to speak with it’s own natural voice. I think the next album that we’re working on now will really be a grand expression of this group’s voice.

When writing music, do you write something and think “that’d be perfect for Feral” or “I should bring this to Howlin” or is it more a creative process with the members of each band in the moment?

EM: Honestly, I’m kept so busy with writing for 3+ different bands that I am often focused on writing with a band in mind. But sometimes things get put aside for one band and later pop up working well, in a new skin, for another band. It happens. I guess that proves that a good song is a good song and the genre or ‘feel’ dressings that get put on them to make them work in context of a certain group are often temporary and fleeting compared to the actual worth and spirit of the song itself.

You’ve played the same Fender Jazzmaster for close to 20 years (if I remember that correctly). What is it about THAT guitar that keeps it in your hands and in your soul?

EM: It’s a Fender Jaguar actually. But close. The two are very close. I’ve had it since 2001 (or maybe late 2000.) And it’s a 1964. I found it in a place called Steve’s music world in Santa Cruz in 2000. I went into a back room for about an hour and played it and it was just playing like it was party of my body, the tremolo system was amazing and stayed in tune (and still does) and that was a huge thing for me because I play the tremolo arm so much, and also the way the guitar sounded with fuzz tone was incredible. The craftsmanship on pre-1965 Fender instruments is incredible. The instruments just beg you to play them.

As an odd aside, a couple guys who were in Howlin Rain – Isaiah Mitchel, Joel Robinow and Raj Ojha, have recently signed up to play in The Black Crowes. Do you ever have an interest in joining up with a bigger band in the hired gun role? Is it pretty cool to see friends play in that capacity?

EM: I’m really stoked those guys got a good, big music biz gig like that. I’ve been surrounded with a very high level of musicians in Howlin Rain and they are often musicians that aren’t famous characters out there yet, I’ve often hoped that even larger opportunities might arise for them.

Finally, as I am an avid Comets on Fire fan, is there any change in the band status? I know at one point you were working on a record, but that was a few years ago…

EM: Nope. It’s in the wind and under the bridge…

Catch Howlin Rain at The Firefly with Jackie on Dec. 8. See howlinrain.com.

Editor’s Note: This interview was edited for length.