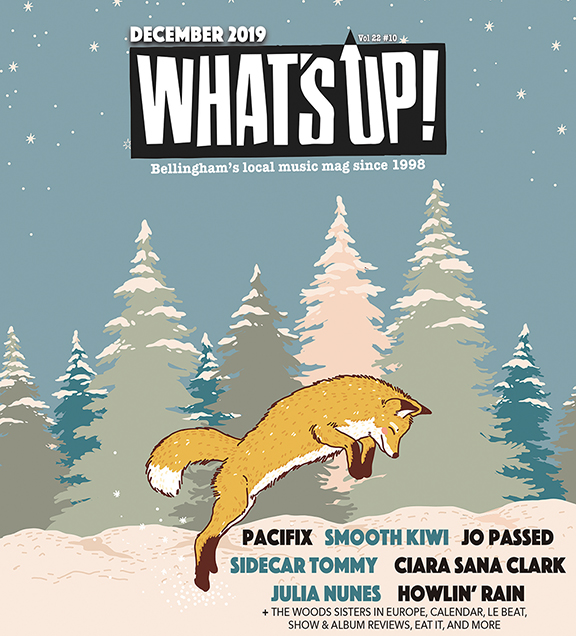 Happy holidays my friends. How’s everyone doing? I hope all is well. It’s been a hell of a month on this end of things, but all is leveling out.

Before I get to the music scene gossip, our version of page six, here’s a little magazine news. The big big big news, of course, is that the mag’s awards show is happeningggggg. The big day is Saturday, Jan. 18, with the amazing Dryland, The Blood Capsules, The Rhetorician, Supermissive, LipStitch and Munch all hitting the stage at the Wild Buffalo in celebration of our wonderful little music scene. We’ll also be announcing the award winners that night… which means voting is JUST AROUND THE CORNER! We’ll be posting the ballots on Dec. 10 (unless there’s a hiccup) and voting will run for a month. Categories include (but are not exclusively) Best Album, Best Live Band, Best Video, Best DJ, etc. etc. etc. You get the idea… so the whole night (for those who aren’t familiar) is awards, music and a celebration of the Bellingham scene – get down to the Wild Buffalo and enjoy who we are and what we’re about. Let the good times rollllll.

That’s about it for now in regards to the mag, or at least all we’re discussing publicly.

Oooooh yeah, another thing – as it’s tradition in Le Beat… I’m excited for Star Wars! Mandalorian has been great, but Rise of Skywalker has my heart. You know where to find me the weekend before Christmas!

Jess Bonin and Kelly Sorbel have teamed up for Moving Murals, which released a song and video this summer – can’t believe I hadn’t mentioned this before. I’ve known them both for more years than I can count, and the song is definitely worth checking out. Like right now. Go. Put down the paper and watch their video.

In non-local music news, but slightly related… have you checked out Luke Hogfoss’s new album? Luke (who now lives in Seattle) was in The Palisades and The Co Founder, and is one of the most gifted songwriters I’ve ever seen. Check out his new record, it’s really special and probably my favorite album of the year. You can find it on bandcamp, itunes, etc. etc. etc.

Just before we went to press, No Guts posted about something new coming out on Dec. 12… what’s this mean? I’m assuming, hoping, wondering if it’s their longgggg awaited album! I’ve hard bits and pieces of the rec and it’s fantastic. No Guts are a criminally underrated band, hopefully them having new music out will regenerate the town’s love for them and all will be right in the world.

LipStitch released a new single, “Holding On,” which debuted on KNDD’s ‘Local’s Only’ show. There’s some other cool stuff in the works with the band, but I’ve been sworn to secrecy. For now, enjoy the single… listen to it over and over and over again because it’s fantastic.

Metal gods, Overwrought, have released a two-song recording which, if metal is you’re thing, should be checked out. They’re one of the bands in a newly resurgent local metal scene which is making me happy. For a long time Bellingham bled metal, but the last few years or so things have been a bit tumbleweed in that scene.

Uriah Garay has released a sweet and soulful little Christmas single with “Have Yourself a Merry Little Christmas,” “Joy to the World,” and “O Holy Night” on it. I dig it. He didn’t try and bend or break the songs, but stuck really true to the sound. The mighty Hunter Gilliam lent a hand on the single as well as Nicholas Lear, so check it out and get festive.

Klefto has released Loosies to the band camp world and, as per everything Klefto does, it’s worth checking out. He’s also posting about releasing new music, so watch for that as well.

Stepping in the wayyyyyyy back machine, Colville Meldoy have put up their Live at the 3B, which was recorded in June of 2001, up on Spotify. Not sure the source of the inspiration which got the band to put it up there, but I’m glad they did. A band not many folks know about anymore, but really a great dark Americana sound. Stereo Donkey’s Mike Bajuk (the only member still living here) played drums.

Nick Taylor (Snug Harbor) and Aaron Guest (Polecat) are both releasing solo albums this winter, so they’ve teamed up for a joint album release on Jan. 18 at the Firefly. Go there, check out some music, then come down to the awards show – you’ll feel full of local music love by the end of the night.

In some “damn, that sucks” news, Nate Kahn is moving to Portland (news that I’ve found out just at press). Not sure where that leaves Hello, I’m Sorry, but know that TYL is breaking up… The good news? The band will be releasing an album (or have depending on when you are reading this), which should be pretty tasty.

Speaking of the wayyyyy back machine, the mighty DJ Velveteen has moved back to Bellingham? If you’re old school and have no idea what I’m talking about, he would do some crazy juggling circus amazingness when he left in town, but he took his talents to the Bay Area. He’s back in town and it looks like he’s here for the long haul. It’s funny talking to him about the music scene because his perspective is so different – he’s been gone for over a decade and is coming back to a Bellingham scene that’s grown and has a lot more happening than when he left. Think if you’re in the mix for different time periods, you don’t get a chance to see the change and growth that’s happened and is happening – Velveteen will tell you the scene.

Drown the Mountain appear to be calling it a day – not sure the back story but they posted that they were in indefinite hiatus… which usually means, “we’re done.” Sucks, that band was pretty good with the promise to get better.

Gallows Hymn have already begun working on a new album. No idea when it’ll come out or anything, but the band has a hell of a creative push so watch these very pages.

Cat Positive have been in the studio recording their first record at Champion St. SWEEEEET.

GET WELL MY FRIEND

Local musician, Pascal Foley, has had his life pulled out from under him. One minute he was a normal, healthy guy in his early 20s, the next minute he is afflicted with a debilitating disorder called Guillian Barre (gee-YAH-buh-RAY) syndrome. It’s a rare disorder in which your body’s immune system attacks your nerves. Weakness and tingling in your extremities are usually the first symptoms. These sensations can quickly spread, eventually paralyzing your whole body. As of his last post, he’s able to walk 50 feet with a walker, but won’t be back to work for a long, long time and has an incredibly difficult road ahead of him. If you have the means to donate, please consider donating to Pascal’s Gofundme. This is a horrible disorder affecting an awesome guy. See www.gofundme.com/f/pascal-foleys-recovery.

Think that’s about it for now. Please stay safe this holiday season.