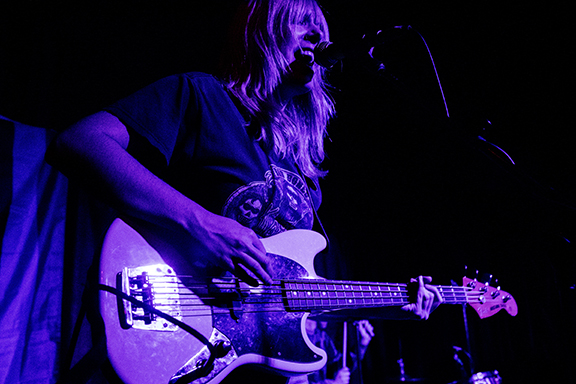 Beautiful Freaks opened the show with a few of their fan favorites such as “Like Our Parents,” “Pop Music” and “Cameo Artist” (you can hear their debut music video for “Cameo Artist” on the band’s YouTube).

Not only did they play hits from their debut album but they also showcased one of their newest songs, “Slugs.” The song maintains their musical style of horror mixed with sexuality – a staple of the band’s sound. Compared to previous tracks this song is one of their heaviest riffs with a rhythm that forces listeners to bounce to its beat.

The Freaks recently lost their tuba player, Maxwell Lemke, who left to focus on his main project Analog Brass. This was a mutual decision among the band and with no one being forced out. However, it should be said that Lemke’s brutal brass playing is certainly missed during live shows.

Next up was LipStitch, who represented the Bellingham sound with soaring solos, mesmerizing melodies and songs that somehow already sound iconic.

What originally started as a Joan Jett cover project is now a band whose talent has landed them an opening slot for Death Cab for Cutie and ODESZA’s Double Major show earlier this year and a recent feature of their single “Holding On” on Seattle’s famous alternative music radio station 107.7 The End.

Songs from their debut EP Best of Us and Tough Year still sound just as fresh live as when they first started playing. At this set they decided to debut two new songs “Mid-Thought” and “Dang” (featured on their upcoming release, recorded by local producer Eric Takuichi Wallace).

You can hear LipStitch at their next show here in Bellingham at the Shakedown playing with Actionesse and Them Folkes on Dec. 6.

Closing out the night was headliners Dude York who are currently touring in support of their newest album Falling, which they released earlier this year.

They opened with their supercharged hit “Unexpected,” which set a high bar for the rest of their show but unsurprisingly each song surpassed fans’ expectations.

Despite some awkward conversation between the crowd and band, everyone near the stage was either dancing or swinging their hair to their chugging riffs and psychotic solos.

Songs like “Love Is” and “Falling” are smashing hits filled with romantic lyrical themes. The title track, “Falling” off their newest album takes a more psychedelic and atmospheric approach without losing their punk-rock sound.

I especially love the line “That song means everything to me, do you wanna take a ride next time we meet? You said “I got a 90’s Volvo and their whole discography.” It creates a scene in my head of a young, understood misfit, from the late 80s, blasting music from their Walkman in the backseat of their parent’s car on a boring summer road trip.

You can follow all of the acts on their social media for any upcoming shows and hear new music on Spotify and Bandcamp.

Jordan Moss (aka The Rhetorician), celebrated the release of his debut album The Native Tongue Meets the New Wave, with a rhapsodic performance at The Firefly Lounge. The self-described “Power Ranger of rap” teamed up with a few of his key producers to play several newly released songs over the cheers of friends and fans.

As folks started to migrate away from the bar and to their spot for the show, The Rhetorician’s lead producer, Slap Serif, opened with a collection of raw and laid-back hip-hop beats.

His musical soundscapes jump from songs featuring scratch samples of Flavor Flav’s chaotic, “Yeah, boyeee” to several with an electronic sound nostalgic of music featured in a tropical island themed 90s video game. His eclectic style of beats and love for indie culture makes him the perfect creative partner for Moss.

He was soon joined on stage by another one of his collaborators, Hunter Gillam. Aside from the fine-tuned production he supplies for Moss, Gillam’s most important contribution to The Rhetorician’s sound is his R&B saxophone and vocal features. This is most recognizable on the single “The Session.”

The following act was Klefto, whose beats can be heard in four different songs on The Rhetorician’s new album: “Power Ranger Days,” “B.B.T,” “What Show Mix” and “WhatEva Man.” His hard-hitting grooves and free jazz approach to DJ’ing makes him the Gregory C. Coleman of Bellingham’s hip-hop scene. He is still in the process of booking and playing sets to promote his newest album Mellow Dramatic, released in June of this year.

Before Moss took the stage, he went to the green room to mediate with breathing exercises – a process that has become a ritual in his preparation to perform as his alter ego.

Moss hyped up fans with his head banging and booty shaking beats on tracks “Ladi Dah,” “Old School” and “Coast.”

With appearances during his set from each DJ on the bill, it was a roundabout of top tier musicianship.

You can follow all of these artists on Instagram, Spotify and Bandcamp for upcoming musical releases and shows.

Pro show tip, my fellow music enthusiasts and haters alike. When covering a show and you miss the opening band, buy they’re tape! This way you can support upcoming, hometown bands and be pleasantly surprised at your excitement when you crack that little buddy open, pop it in the deck and are blown away by the sonic assault concealed within said cassette’s plastic housing.

Yellfire’s ethereal, droning riffs are juxtaposed over heavily distorted melodic chord structures. Groove laden beats guide the songs’ sweeping dynamics and tempo changes that follow no master genera. This group’s unique blend of hardcore, doom and post something or rather, fill the soul with energy and emotion.

This was my first time seeing Dryland since the group recently added Bellingham’s own Chad Smith and founding member of Fed X, Beau Boyd to the lineup, replacing original drummer Luke Greer. While the change could be slightly felt in the rhythm section’s usual razor-sharp precision, this did not stop the group from laying audio waste to a building crowd of patched jacket laden, beer guzzling music enthusiasts. Dryland creates unpredictable riff driven, battle call laden, sludgy rock and roll that leaves the listener trapped between parallel realities.

Tacos! celebrated the evening with the Bellingham release of the group’s new album, Uso Rudo. As the duo began to sound check, a psychedelic energy engulfed the room. The   guitar soundcheck separated the faint of heart from the ultra-sonic audio punishment enthusiast’s occupying the front of the stage.

Harsh tones of feedback and over amplified distortion built tension as the duo prepared to engage and commune with the holy ghosts of rock and roll. Churning drum beats swell with intensity as they accompany the precise, chunky guitar riffs. Tacos!’ brand of unique heavy psychedelic rock and roll destroyed as they soared through a tight set to an enthusiastic crowed.

F#cked and Bound took the stage with road seasoned stride as they tore into a high energy set of blazing fast, soul squeezing hardcore punk rock drenched in a feminist gaze. Fast and impulsive, the group tears through hi energy riffs driven by unique blends of amplifiers. As the band slays, vocalist Lisa Mungo circles the room making a connection with each person occupying the dance floor, and beyond. Mungo strips the macho aggressive “front man” moniker during her performance and turns it on its face. Her hands-on approach is more engaging then aggressive. As if trying to elevate the audience to their more primal state, letting go of their worldly concerns and screaming it out together as a community, rather than an individual.

It was refreshing and inspiring to see a broad range of gender representation within the bands of the evening, as well as in the crowd. For too long heavy music has been dominated by the male gaze. Times are a changing and it couldn’t come fast enough in the world of rock and roll.

On Nov. 2, condensers of the underground music scene packed the Alternative Library and Karate Church for an evening of sweaty bodies, gory moshing, and impassioned melodies.

Gross Out Records brought a new and creative way to absorb music to the Bellingham music scene. Having produced events around town at local record shops, throwing PSYCH OUT, and creating their own block at BAMF! this past summer, this record label dabbles in it all.

Gross Fest was a rapid-fire of performances. With two stages shared between 10 varied bands, the Fest provided an atmosphere to get lost in. This compiled variety of sounds filled the Alternative Library and Karate Church with roaring tones for the entirety of the night. For just $10 anyone could watch bands like rockers’ Spoon Benders, hardcore Bellingham bands TYL and Jerry Core and much, much more.

Starting at 7 p.m. with Careen, the fest was in a non-stop trance of electrifying music that didn’t let up until the very end.

The overflow of traffic deafened the halls between performances, a good representation of how the crowds of people were eager to absorb every drop of the performances and didn’t want to miss out on anything.

The performance that stood out the most to me was Wild Powwers. Their use of heavy distortion capsuled the room in a mind-bending frenzy. Saturated in garage rock reverb, the crowd danced along with their emotion-tingling music.

All the proceeds from the night went towards Mt. Baker Planned Parenthood clinic, which was a longtime plan of the folks at Gross Out Records to be able to do. With a total of $1,200 raised, Bellingham should be proud to house such an amazing record label looking to support the community. Congrats y’all, Gross Fest was a success.