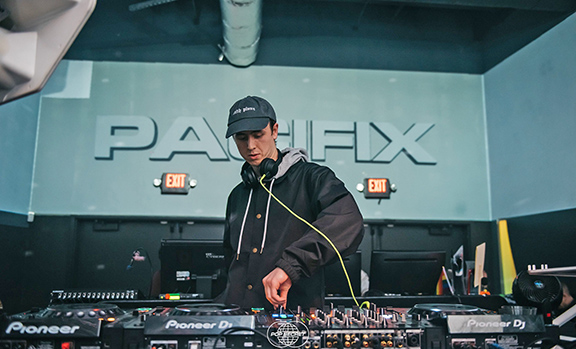 Much like how in the 70s it must have seemed like everyone played the guitar, nearing the end of the 2010s  it sometimes feels like everyone is a DJ. At the bar a DJ, at your wedding a DJ, at your kid’s 10th birthday a DJ. Not every DJ is what meets the eye, however. Many of them break the mold of what you’d expect from a typical disc-jockey, and one of them we’re talking with today is Pacifix.

Pacifix (real name Garrett Barber) is a local musician. Mainly dubbed a DJ as that’s his main schtick, but also working hard on the side to perfect his own sound, with aspirations of segueing into performing mostly his solo work. It’s been a long way to this point, and the seeds for his creativity were planted at an early age.

“I was thrown into piano lessons at a very young age, and did that for 3-4 years but I didn’t like the structure and the sheet music I had to play so I finally quit, but I had gotten pretty decent at reading sheet music… In high school a couple of my friends started rapping and we would always freestyle for fun, so I started trying to make the beats for them. That was when I got interested in playing the piano again and making beats in Ableton… I grew up listening to a lot of hip-hop/rap, and some alternative rock.”

From there Pacifix got into electronic music, going to festivals like Summer Meltdown, Bumbershoot, CHBP, as well as various raves. He started getting very interested in making the more dubstep oriented electronica that was on display at these venues, and it was around this time when he discovered just how many emotions electronic music could uncover.

“There is so much freedom to express yourself with it and take influences from any genre. That’s when I really started going hard with writing music, producing and synthesizing my own sounds and when I started the Pacifix alias… I had some friends who were also getting into production and DJing and became close with them – they’re still some of my best friends today. I first performed at a DIY concert that we put on. I really had no idea what I was doing at the time but  it was really fun. It gave me a rush and inspired me to keep going with it.”

Throughout college Garrett continued to do sets at friends’ parties, and eventually moving up to the local bars and fests, further getting the hold of how to make DJing progressive and engaging. Not just for the audience, but for himself.

“For a long time there was a huge disconnect between what I was DJing and what I was producing at home. The stuff I was producing wasn’t necessarily ‘turn up’ music like pop and hip-hop hits that I thought people wanted to hear. I think a lot of people think of me as just a Trap/EDM DJ”

It’s certainly easy to get pigeonholed when you do as much music work as Garrett does, but despite his current status, he wants to play more of his maximalist fusion of EDM and hip-hop. For the last few years there have been singles released on his Soundcloud and Spotify pages, but soon enough he will have enough tracks for a full on album.

“Songs begin in a variety of ways. Either I’m scrolling through my sample library, putting together drums under a vocal track , copying a song I like them turning it into something different, jamming on the piano, or trying to build an idea popped up in my head. I then loop a main element I have and try to add as many ideas under a solid drum groove… Then I come back to it later the next day or maybe week, sometimes not for months. If i still like it when I come back I will usually have a good vision for it, otherwise I’ll just move on.”

It’s this pursuit of knowledge driven by passion that is so admirable. Whether Pacifix is spinning the perfect mix to suit the crowd, or crafting explosive bangers, Garrett has created his own unique sound and style and the Bellingham music scene is glad to have them.