Sidecar Tommy: The rhythm of life 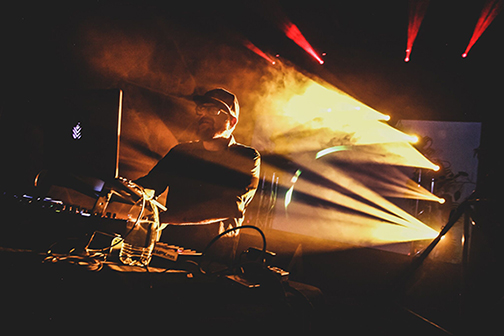 Tommy Cappel doesn’t just produce music. The drummer of Beats Antique and electronic beat maker eats, drinks, breathes, and lives music. This passion began early in his life. Growing up with music teachers for parents and having instruments around, the opportunity to make music just surrounded him.

The rest was history after he got a drum set and starting playing in bands. From there, this calling followed him wherever he went. After visiting California, going to Burning Man for the first time, and meeting welcoming and supportive people, Cappel decided to move to the West Coast and take up the opportunities that were presented to him. From there, he reinvented himself and eventually found himself being part of the biggest projects out there—Beats Antique.

The global fusion, dance, and experimental band featuring belly dancer Zoe Jakes, and David Satori on strings, took off and kept growing.  The trio produces not just a sound that is fun, tribal, funky, electric, percussion heavy, and makes you move. The group creates a visceral experience that can take someone out of themselves and on a journey from the start of a set to finish. They could walk into the diviest of dive bars and morph the place into the most beautiful and euphoric Utopia.

After 13 years of making music with Beats Antique, Cappel is still going strong and loves every minute of his life as an artist. His mind is full of new ideas. That inspiration and drive to create is just as exciting to him as a child getting a brand new toy.

“It really comes down to being grateful for the opportunity. There’s so many creative people out there and a massive amount of creativity happening at any moment. It’s great to be a part of it and be challenged to keep up with it because it is tough,” he said. “We still have something to say and that’s what’s so fascinating about it. We just keep going.”

Cappel has another project for his electronically produced music under the name, Sidecar Tommy. This project has a similar sound and experimental approach to Beats Antique yet gives Cappel the opportunity to create with more freedom. He is able to break the rules a bit and bring in different sounds and rhythms he is limited to on drums.

Sidecar Tommy, gives him the opportunity to work with an open palette. He describes it like painting—making electronic allows him to use any of the colors he wants in order to express himself in whatever he’s feeling.

“Rhythm is rhythm. If rhythms make you move when you hear them and sounds inspire your brain to thing of certain things, then you can kind of create custom moments when producing music,” Cappel said.

He takes that freedom and applies it into live performances. When it’s him up there playing music derived from a different part of his brain, it gives him the chance to test the waters a bit. Cappel likes to play songs fans of Beats Antique aren’t expecting such as unreleased material, remixes, or take in completely in a new direction just to see what sort of response it gets.

Cappel is very thrilled about some of the new releases that will be coming throughout the year. He is going to be releasing a lot of new songs under Sidecar Tommy. He also announced that Beats Antique will also release seven new songs. Cappel is especially stoked on the collaborations that are taking some of what they’ve produced outside of the box. He’s revealed that his personal favorite is collaboration with Balkan Bump that is a lot of fun and reminiscent of the old Beats Antique days.

No matter what he’s doing, Cappel wants his art to be honest and resonate with anyone who’s listening to it. A major value of what’s important to him is being able for people to feel connected and supported by what he makes.

Often, it’s when people approach Cappel after a show or have the chance to meet and talk to him shows him what kind of positive impact his art can have on people.

“The moments that people have shared with me are priceless. I’ve heard a lot different things. The biggest thing is that somehow our music helped them, that help was need, it was necessary, and that our music might have been a part of a big pivotal moment in their life,” Cappel said. “It’s an incredible thing to stand where and listen to someone you’ve never met share some deep, deep personal things with you. I don’t need anything else.”

Sidecar Tommy will be playing at the Wild Buffalo on Friday, Dec. 13. You can find his music at soundcloud.com/sidecartommy.