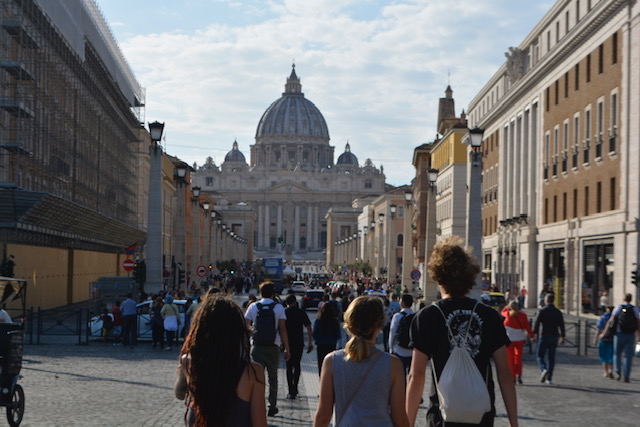 I asked myself a question one day… If I could do anything with my life at this moment what would it be? I quickly decided that it would be to travel the world and play music. Those were two biggest things in my life, but I had always seemed to keep them relatively separate. I decided in that moment that I could begin merging my two loves by just…doing it. Why not? Why do I have to wait for record label to send me to a foreign country to play music? You can do anything in life, it just takes some dedication, patience, and faith. Oh, and research…lots and lots of research. Because if there is something you want to do, chances are there are loads of people who have already done it and are out there to help show others the way. 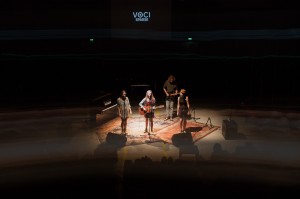 So as I started to plan my upcoming travel, I began my research on how I could go about gigging abroad. I came across an article written for CD Baby’s DIY Musician that was packed with great information and tips on how to create your own handmade tour. I was so inspired by the DIY attitude that I decided I was going to create my own handmade, patchwork Euro tour!

The article had many practice tips including stripping down your band for your first EU tour (which we did- rebranding acoustically as The Woods Sisters, because our full band Waking Maya would be too much to tour with initially), hitting up everyone that you know in the areas you want to play, and taking advantage of the rising house show phenomenon. These “house shows” or “sofa concerts” are becoming a big thing in Europe, especially countries like Germany. The biggest website to explore the many hosts and artists around Europe is SofaConcerts.com. People sign up, turn their homes and yards into venues, book bands to play (usually touring musicians), and then invite all of their friends over! The website also contains different kinds of venues including restaurants, cafes, parks, etc. After making a profile and applying to various different venues, I was able to book a few shows in Spain and Germany. 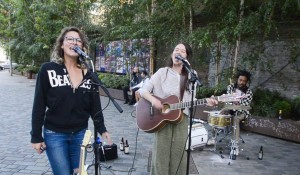 For one of these shows, we ended up traveling to an old town named Quart in Spain, near Barcelona to meet our Sofa Concerts host Miguel, a lovely man with a beautiful family. The top floor/attic room of their home was turned into an intimate venue space, equip with a sound system, merchandise table, area for food, chairs, benches, and cushions on the floor.

When it came time to play, the place was packed with their Spanish friends, who quickly became our friends too. The place was buzzing with life, everyone drinking wine, eating homemade tapas, and enjoying the music. The audience at this house show was one of the best we’d ever had- They were respectful, attentive, engaged, humorous… eager for awesome music! I have heard from many musicians that their favorite shows while touring are the house shows, and I can definitely see why. It is a much more intimate musical experience, all barriers down.

Miguelle, our host, also connected us last minute with his friend who owns a tapas bar in Barcelona and was looking for musicians for his place. We played a show in the cave-like restaurant with bare stone walls and a cozy ambiance, AND ate amazing food. You always have to be prepared for spontaneous opportunities! The place was packed with people eating, drinking and having a good time… in extremely close quarters. It felt like it was over 100 degrees in there and I had not yet acclimated to the Spanish temperatures. I was sweating so much I had to run outside every few songs and get fresh air so I didn’t melt into a puddle! 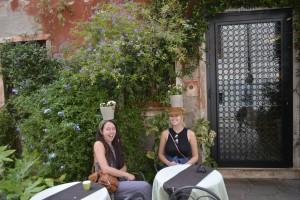 Another ingredient in this handmade tour was the meeting of a bold and beautiful woman by the name of Prita Grealy. I was listening to the Female Entrepreneur Musician podcasts one day and came across a great interview of Prita. The more she talked, the more I connected with her on a personal level, so I decided to send her an email to let her know how much she inspired me. I immediately got a response and we began chatting, becoming friends over our love for travel and music. She took me under her wing, giving me so many starts and contacts to jump off of and ideas for different locations. By reaching out to someone who inspired me, I was able to make a new friend while also learning from someone who was further along doing something that I wanted to do.

One of the gigs that I was able to book with Prita’s connections was in Hawick, Scotland, an enchanting countryside town amongst the rolling hills. We were put up in this adorable bed and breakfast called the Fox and Hounds Inn, that was decorated in the most charming old English way, while keeping with the theme of foxes and hounds.

After we left Hawick, we headed back to the city of Edinburgh. We spent a couple days there playing at open jams, and a spontaneous busking show in Grassmarket Square. The street shows are some of the most fun, catching the attention of all of the surrounding bars and people passing by. Children stopping to dance, while their parents sing along. At one of the open jams that we sang at (a bar called The Dog House) we met a man named Chris Lyons, who was playing guitar for the backing band. While we were chatting afterwards, we find out he plays many different instruments including the accordion! So we made a plan to meet up the following morning and record a video in the center of town together for my weekly Wandering Wednesdays. For a year and a half I have been recording a new video every Wednesday in a new location, often time collaborating with people I’ve just met along my travels. My sister Paige, Chris and I played “Jolene” by Dolly Parton together, and it was pure magic – really capturing the European vibe.

Another cool gig that we played was in Venice, Italy. I booked this show by taking the tip of contacting everyone I could think of that I had met along my previous European travels. One of these friends included Nic, a trumpet player and music booker in Venice who scored us a spot at an acoustic showcase. The show was at a big warehouse-like venue in an industrial area of Venice for an underground, swanky event called Voci Sparse (Spread Voices) that showcased 4 different groups throughout the night. By this time we had met up with our other sister Ireland, and her boyfriend Joe. We were ready to play some music! We got to know other musicians, received a delicious fresh-cooked Italian meal, all while performing with extremely professional sound, lighting, and event management.

The only downside of this night was the random loss of….my voice?! Somehow, in the 2 hours between sound check and our performance, my voice managed to disappear almost completely. Ten minutes to showtimes and the place was filled with vibrant and friendly Italian people, meanwhile my voice is nowhere to be found. The show must go on… While we performed I just did a bit of adapting and changing of my parts to keep it in my lower range, where I was still minimally audible. Luckily I was singing with my sisters, so they were able to sense my subtle changes and adjusted their harmonies accordingly. That’s the blessing of performing with people for 20 years!

The last key ingredient to a handmade tour is being open and intentional in the moment; Open to opportunity, and intentional in what you are manifesting. We had many opportunities come to us while we were traveling, just by being prepared to play. We traveled with two mini amps, collapsible mic stands, and cables so that we were able to pop up a show anywhere, anytime, not being limited to the venue having a sound system.

For example, when my sister and I started our trip in London, we played a pop-up show in Deptford with this equipment in the market square, outside of some bars and the train station. We were joined by a nice guy we had just met that day at a coffee shop. While chatting, we found out he played the drums, so naturally we invited him to come jam! It was a magical evening of playing our hearts out, surrounded by dancing children and drunk folk. I remember thinking… “This is why I play music.” That golden feeling you get when you connect with your audience, and merge energy; Sharing in the moment as the music heals and brings people together from all walks of life.

I could go on and on about the amazing experiences we had, and the deep bonds and friendships that we made, but then this article would never end. Traveling is so rewarding if you allow yourself to move outside your comfort zone into a realm of new, raw experiences. In the end, this patchwork tour was a spiderweb of opportunity, that spread from intention and drive – just a couple of ingredients that can help you to create a life of doing whatever it is you love most.