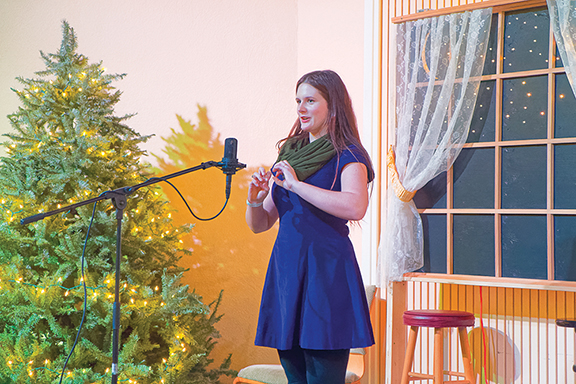 In its fifth year, the Bellingham Folk Festival continues to develop into a mainstay for the acoustic community in Bellingham. Coming up the weekend of Jan. 24-26, the event features workshops, dancing, concerts and even tea – a great opportunity for folk fans young and old to enjoy the sounds of the genre, and learn. Our thanks to the talented Cayley Schmid, the primary organizer of BFF, for taking some time to answer a few questions about the festival and share what’s happening.

Can you give us a little background on the Bellingham Folk Festival?

I’ve been attending wonderful fiddle and folk music-based events for many years, performing, taking and teaching workshops, dancing, and generally enjoying the merriment of these inspiring and heart-warming gatherings. These were fiddle camps and festivals where I was able to be part of a tiny, unique village where everyone seems to love music and good times. You can start a conversation with almost anyone and it will end up being a new friend. I wanted to create something similar in Bellingham that would bring together some of the different groups of musicians and music appreciators that tend to cluster under the ‘folk’ umbrella.

The Bellingham Folk Festival first began in December of 2014. I liked that it was a cozy, wintery, non-Christmas-y, community event, but most people had a hard time with scheduling close to the holidays. Because of that movement I tried moving it to January in 2016, but then stubbornly ordered 100 customized Bellingham Folk Festival Christmas ornaments and moved it back to December. After realizing that attendance really did benefit from a date after the holidays and selling less than 100 ornaments, I moved it back to January in 2018. Because of the bizarre scheduling, that means we had two festivals in 2016, and none in 2015 or 2017. Potential future merchandising opportunity, ‘BFF 2015, You Had to Be There’.

The festival’s focus is as much if not more on the classes. Can you tell us about some of the teachers, and what are the age groups/skill levels?

Everyone can take something from workshops and I love that there is an acknowledgement of that in the folk music scene. We are all constantly learning and absorbing new ideas (or should be) and this certainly applies to music as well. Teachers at the BFF teach a workshop and then sit in on one of their peers’ classes in the next block. You never know what you are going to get out of a workshop, but if you go in with an open mind you will usually come away with something that sticks. Maybe a new tune, an approach to learning, a history lesson, or just a good time.

Many of the instructors are also friends and wonderful performers. Almost everyone who performs during the weekend also teaches a class you so you get a chance to see musicians in two different roles. There is a pretty even distribution between local heroes and touring artists. Workshops are mostly designed for folks that have been playing an instrument for at least a year. That being said, workshops with experienced teachers can really cater to multiple levels at the same time. We have a lot of singing and dance options for people that have never played an instrument before, and tons of fiddle, guitar, mandolin, uke, etc. classes for multiple levels of skill.

Tell us about some of the bands that are playing. How were they picked to play the event?

The line-up is a combination of community interest, timing, my preference, and coincidence. Now that the festival has been established I get a good amount of applications and contacts from bands I know and folks that might have heard of the festival from their friends. As a fiddle player I have to admit I am slightly biased towards fiddle-led bands and tend to get extra excited about groups with my own personal heroes in the line-up. I also try and book a variety of genres within in the ‘folk’ descriptor. There is a tendency towards passed down traditional tunes and songs at the festival at the moment. Music with a history and an ongoing story.

Who helps organize the festival with you?

I am the organizer and haven’t really built a team at this point. I have some fantastic volunteers, family members, and moral supporters that really make it happen during the event. Honestly I can’t imagine having done this without them. And of course my partner, Aaron Guest, is the guy who I ask to count hundreds of tiny pieces of random paper at three in the morning, “THIS IS SUPER IMPORTANT.” During the year leading up to the event I am the only one doing festival related stuff, and constantly re-assigning being a terrible delegator as a strength or weakness.

When not organizing the festival, what do you do for your day job/musically?

During the weekdays I split my time between teaching fiddle lessons and working as a booking agent for FLi Artists. I also put a good amount of time into the Bellingham Irish Festival which happens in October. That event started in 2015 and has grown into a really fantastic, lively weekend downtown with collaboration between tons of downtown businesses. Check out www.bellinghamirishfestival.com. I would love to make festival organizing part of my income in the future, but for now they are labors of love.

Do you love piña coladas and getting caught in the rain? Are you looking to connect with your musical community and huddle around a beacon of hope and caring in the dreary month of January? Thank goodness you now know about the Bellingham Folk Festival! Informative and mind-bending workshops, dorky jokes, inspiring concerts, meet-cute encounters, spontaneous jams, a righteous merch table, epic dance parties, and more! See you there.

The BELLINGHAM FOLK FESTIVAL was founded in 2014 by Bellingham-area resident Cayley Schmid (above) and celebrates folk music and dance with workshops, performances, dances, and jams for all ages and abilities. The festival will be held this year the weekend of Jan. 24-26, with most events at the Bellingham Unitarian Fellowship at 1207 Ellsworth Street. The BFF afterparty will be Saturday, Jan. 25 at the Firefly. For the full schedule, see thebellinghamfolkfestival.com.

This year’s performers and teachers include Nando Duarte and Choroloco (both of Brazil), George Rezendes (Port Townsend), Ben Hunter and Joe Seamons (Seattle), Andrew Finn Magill (North Carolina), and Red Tail Wing (Michigan), to name a few. There will be various workshops and Q & A sessions where participants can learn to do things such as groove with an accordion, tune a fiddle by ear, find harmony parts for voices, dance the two-step, write basic tunes, explore Brazilian choro music and more.