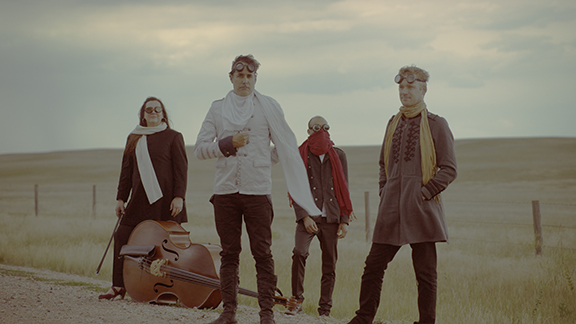 After two decades of being together as a band, DeVotchKa is still having fun making music and connecting with fans.

“I think we are still in the mentality of putting one foot in front of the other and making things that we are passionate about,” DeVotchKa drummer Shawn King said during an interview last month.

DeVotchKa came together in 2000 as Nick Urata (vocals, guitars, piano, trumpet, theremin, bouzouki), Tom Hagerman (violin, accordion, piano, melodica), Jeanie Schroder (sousaphone, upright bass, vocals, flute), and King (drums, percussion, trumpet, accordion, organ). They all met in their hometown of Denver, Colorado through different music projects, King said. Urata met Schroder at a fashion show where she was playing the tuba, Urata and Hagerman met at a benefit and Urata and King met at another show, all within a couple of years. King had seen Urata perform before meeting him and knew the project was something he was interested in being a part of.

“I wanted to be involved with a team of people who worked to be as creative as possible and go out and explore the country and world and do something special,” King said. “I just didn’t have any idea it would last this long.”

Their most recent release, This Night Falls Forever, came out a year ago and was their first album since 2011. It followed seven prior full-length albums, two album soundtracks and one recording of them playing live with the Colorado Symphony.

This Night Falls Forever is possibly the most “indie” of this band’s work thus far. They remain consistent with cabaret undertones and eastern European influences but bring forth a moving sound reminiscent of the like of The National or Arcade Fire. The title of the album, credit of Urata, was born of that feeling when night begins to fall and there’s a certain electricity in the air and you get the sense, even for just a moment, that everything is going to be okay, he said.

The time from their 2011 100 Lovers to this latest work was the longest to elapse between albums for DeVotchKa, and despite it cultivating a brilliant piece of work, it wasn’t necessarily intentional.

“It was king of a perfect storm of things getting away from us, be it family or marriage or otherwise” King said. “It’s easy to get into clichés and probably could have broken up in that time if we weren’t so dedicated to what we started. In our minds it didn’t feel as long as it did for the fans.”

Aside from DeVotchKa, each member has their own individual creative thing going on, King explained. Urata lives in Los Angeles where he focuses on scores for film and television, Hagerman spends time composing for symphonic gigs, including work for the Flaming Lips, and King has worked on solo projects with other musicians in the Denver area.

King feels he is at a time, after all these years, when he can step back and feel the power of what they have as a band regardless of the amount of time they spend working together. It’s a special bond to be able to go on stage and perform without having to worry or even think about what your band members are doing, he said. This is a group that knows they have each other’s backs, he said.

“As the waves of life have gone up and down coming back and doing something that feels so true to who we are as individuals and as a family – it’s greater than the sum of the parts,” he said.

FOR MORE: DeVotchKa plays at The Wild Buffalo on Sunday, Jan. 19 with Glass Heart String Choir. Follow their social media for updates.