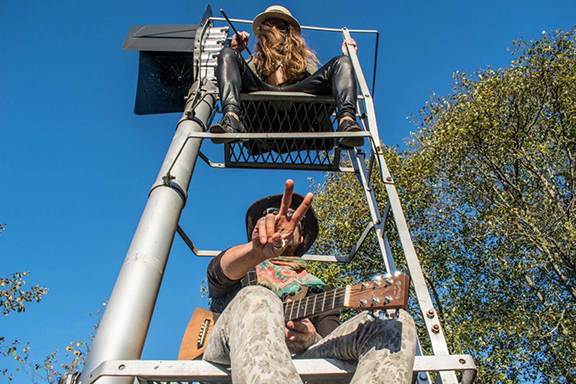 Since 2017, Kickin Names have brought roots-based folk punk to the Sedro-Woolley and Bellingham area. Both natives to Sedro-Woolley, Chris Fish and Alton Fabie practically grew up in each other’s yard. Yet, they didn’t start performing under the title Kickin Names until the last few years.

The band is best described as a little bit country and a little bit punk. “We’re just two small-town country kids who love punk music,” Fish chuckled. “We are the punks of Sedro-Woolley.”

Forever a duo, Chris and Alton have always loved all the independence and simplicity that came from being in a small music project. They have already released an EP and completed their second tour.

“We can load up into a subcompact SUV with all of our gear, including a PA and still have extra seats,” Fish said with a laugh.

Not only do they cherish an easy load in for shows, but they also love the ability to dive into collaborative work with other artists. As close friends and “unofficial openers” of Whiskey Fever, Kickin Names often share a stage with the rock ‘n’ roll band for live performances. Their combined efforts make for a punk rock force bond – one that will tour together in March.

A major influence for the band when writing new material is Andrew Jackson Jihad. Fish first fell in love with folk punk while listening to AJJ; Alton also pulls inspiration from singer/songwriter Jason Mraz. During the band’s tour in March, they are lucky enough to check out AJJ’s home studio along with Jason Mraz’ studio and Bridge City Sessions.

Fish and Fabie feel there was not much of a local music culture while growing up, but now see a blossoming scene in the Skagit Valley and more places wanting access to both local music and traveling talent.

In seeing this, the band wants to help other artists pursue their dreams and passions, and Fish founded a production company called Road Rambler Productions with Steven Marrinier. The company consists of Fish, Marrinier, Jasan Winship, Micah Evans, Anthony Martinez “Choncho,” and Garrett Bollaert. The team dives into things such as cinematography, audio engineering, and screen printing for any and all artists that want to use their services. The developing label’s expertise is in roots-based music, but they mostly want to help get any independent artist on their musical journey, and do it at an affordable price.

“If you look at the industry’s average price for a minute of video it’s about 1,000 bucks and that’s for artists, I mean we are artists and we can’t spend that,” Marrinier said. “We want to offer a cheap and accessible way to get audio, video, and publicity.”

In their quest to becoming an accessible record label for independent artists on a budget, Road Rambler Productions have just moved into their headquarters in Sedro-Woolley. They are working to build a live room, production studio, and mixing area plus a merchandise and print shop.

Stay tuned of what’s to come in the Sedro-Woolley music scene, including a collaborative video shoot with Road Rambler and Bridge City Sessions. A Kickin Names Live EP was released at the end of November, and a tour with Kickin Names and Whiskey Fever will be coming in March, produced by Road Ramblers.

Check out Road Ramblers’ YouTube channel. Plus, take a look at Kickin Names Facebook page for show updates, and listen to them on Bandcamp, Spotify, Apple Music.