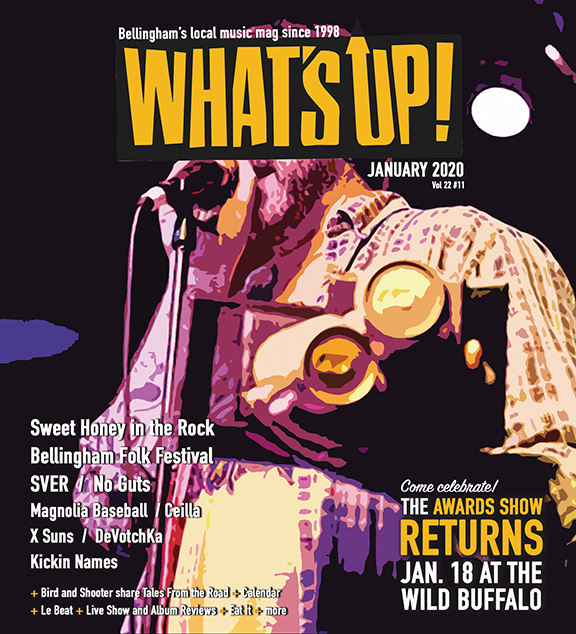 Well hello there everyone, I hope you all had a good holiday. We’re in a new decade, so let’s rock this.

A little quick mag news… the Awards Show (as if you haven’t heard already) will be Jan. 18 at the Wild Buffalo! Special thanks to Dryland, The Rhetorician, LipStitch, The Blood Capsules, Munch, and a special guest for performing, and to Aireekah for being MC of the night, with the mighty KLEFTO DJing between sets! We may have other guests for the show, but we’ll see how it shakes out. Supermissive broke up (more on that later) so they’re sadly out. Shimmertraps were going to fill in but they ran into life complications, so they had to pull.

Voting is open on our website through Jan. 12. We look forward to seeing you at the show, celebrating local music, and having some fun. The show starts at 9 p.m. and costs only $5!

I’m glad I finally get to write this – NO FI SOUL REBELLION IS BACK! One of my all time favorite local bands, who went dormant several years ago, is making their triumphant return – this time as a full band! Now including members of The Wyrds (the two bands essentially merged), they’ll be making their debut on Jan. 18 at The Shakedown… Unfortunately, I won’t be there as it’s also the magazine’s big show night at the Wild Buffalo… but…. well… I’m just happy their back. They were, without a doubt, one of the most entertaining bands this town has ever seen. Enjoy!

TYL released their debut at the end of November, with guitarist Nate Kahn saying the band had broken up due to him moving to Portland. Welp, Nate still moved to Portland, but the band will be continuing on in a “semi-active” fashion. The four piece is already working on a new release and planning a tour for the spring.

Hello I’m Sorry will be continuing on as well with Nate gone. The project has always been more a recording outlet for Seth Little, with the live band including Nate. From what I’ve been told, that’s how things will continue!

Word came down at press time that Dain Weisner is moving to Portland. I really enjoyed Dain’s solo record and had hoped he would gain more traction as a local songwriter, but guess it just wasn’t in the cards. Hopefully Dain enjoys p-town and he keeps playing music – good luck Dain!

In early December, Chris Lamb (aka Chris Con Carne) made it official that Avalon Records will not be reopening. Chris and his wife Jen are using the opportunity to make some changes in their lives… so after 20-something years, Avalon will definitely be no more. It’s a hell of a blow but with the record business being what it is, I’m glad we still have Everyday Music and hopefully this will better ensure their long term viability. Best of luck to you, Chris.

Ceilla has just released new material as well. The Halcyon EP dropped a few days after Christmas and includes guest spots by Oddlin and Pacifix. I’m stoked to hear it. You can read more about Ceilla after you turn the page.

As of press time, Smooth Kiwi has released a new single “Am I Asleep?”… and it is magnificent. Like holy wow good – totally blown away by how well the song flows, the sound quality, and how majestic it feels. I’m stunned… and it’s been awhile since I’ve been stunned. Can’t wait to hear the full length. Another new single is dropping in January.

Have you listened to the new No Guts record? Well, you should… it’s fantastic, one  of the best local releases I’ve heard in years. The songwriting is fantastic, the musicianship is top notch – lots of rock, lots of big guitars. The band officially released it last month, but as of press time, there isn’t a release party scheduled…. Hopefully soon? It would be killer seeing them play live again.

The new Brackets record is pretty astounding. The band, which includes local again Aaron Ball from Clean Clocks (he was also in Enders of Ozone, Sharpie and a million other bands), ex-locals Josh Goodman (Lands Farther East) and Chris Rasmussen (Racetrack, USS Horseship), as well as singer Michael Gill who is just a fabulous person. Pretty interesting rock record made by some long time music scene veterans. Go check it out, and hopefully they’ll be playing in town again soon.

The mighty Sunsick are releasing their debut song right about the time the mag comes out! “Love/Migraine” will be hitting the scene as the new year rings in. They’re a new band I’m excited about. Check them out!

Ex Nihlo, a black metal duo made up of Austin Patterson and Eli Ballis, have signed to Black Spark Records out of the UK, which is, you know, kinda bonkers. The label will be releasing their upcoming recording Preaeludium, in the spring… hopefully followed by Eli moving from North Carolina back to where he belongs, in lovely Bellingham. I miss that dude. Kiss the little one for us, Eli!

Last month, we lost two people who left us way too early. Scott Hartwich, who owned Hammerhead Coffee with his wife Mary Burwell, was a fixture in Bellingham and a friend to countless musicians and artists as well as father to Andrew and Ezra (Ezra was in Girl Teeth a few years ago). Scott was kind and intelligent, a great person to talk to, and just one of those guys that should be walking on this Earth. He was passionate about politics and sports, and life. Our thoughts and love go out to his family during this very difficult time. Please consider donating to the GoFundMe account to support his memorial and family.

Just as we were about to go to press, we at the magazine learned of Elijah Nelson’s passing. Elijah was the bassist in Black Breath, who got their start in Bellingham, and before that played in Wizrds of Wor as well as Lago Volunteers (which is when we first crossed paths). Musically, he was the anchor of Black Breath, a ridiculously talented musician. He was loved by those who knew him. Our thoughts and love go out to his family and friends.

Those two people both left us way, way, way too soon. It always sounds trite, but cherish every day and hold tight those you love.

That’s about it for now. Best to you all in the new year. Thanks for supporting the mag each month, and we look forward to seeing you for some fun on Jan. 18 at the Wild Buffalo.