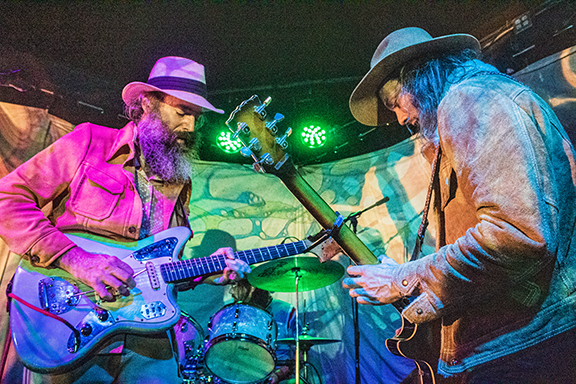 Exhumed performed their unique brand of highspeed, gore death metal to a sold out crowd at The Shakedown in November. The Northwest late fall gloom rained over an unusually long line of energetic spectators waiting to get into the show setting the tone for a night of blast beats, HM-1 distortion pedals and an undead, chainsaw wielding surgical mummy.

Exhumed has been an international touring band for nearly 30 years, yet this was their first time in Bellingham. Known for a campy stage show, Exhumed returns fantasy and fun to a genre that is often ridden with a toxic male gaze. They are the kids that hid out in the basement watching B horror movies while drinking beers and playing Dungeon and Dragons to avoid the schoolyard bullies.

With six packs of beers adorning analog T.V. sets displaying montages of cheap gore movies, The Shakedown stage was transformed into a textbook rock and roll basement practice space. Founding singer and guitar player Matt Harvey took a moment to gaze over the crowd, thanking everyone for coming before reminding us that for some, “the stage is your grave.” He then abruptly started tearing into the face melting death metal riffs he founded the group upon. Exhumed’s music is an example of rock and roll songwriting at its finest. Melodic and intentional, catchy song structures are not lost in the swell of grinding blast beats, supporting demon vocals and sweeping arpeggio guitar squeals.

For this tour they were joined by supporting bands Judiciary, Necrot and Gatekeeper. West Texas hardcore band Judiciary had knuckles hitting the floor as spectators celebrated the groups conventional early 2000s sound as wind milling arms and moon stomping legs performed the ritual dancing most associated with the genre.

Oakland three-piece Necrot blew the crowd away with their early British crusty Doom sound. It was impressive to see one guitarist bring so much tone and flexibility to a position that usually takes two players to feel most effective.

Arizona based Gatekeeper got the biggest pit seen at the Shakedown in who knows how long. HM-1 driven thrash metal grooves at their finest. They even gave a shout out to hometown thrash heroes Black Breath before unleashing their unruly set.

Metal is the most subdivided genre of rock and roll ever. Bands attempt to reinvent the wheel again and again, but never come to terms that they are just playing really loud blues music with crazy drums and lots of structural changes. With that comes a sense of ownership, just like the bully on the school yard, and presents a macho gaze that just has to go.

On this night however, all the bands’ infectious energy was a present to be shared with all. Death Metal is a way of celebrating the fact we are made of mortal blood and flesh, and that’s all right. Necrot’s vocalist put it to words as he raised his hands to the air and proclaimed, “Are you happy in this fucked up world, or would you rather be deeeaaaaaadddd?” As the crowed screamed back with both vigor and mirth.

As is typical for a Sunday show, especially in December, Bellingham was pretty quiet upon arrival to The Firefly. Obviously, being a small market city means we get bands like Howlin Rain more often on a Sunday so they can play Seattle and Portland over the weekend. And, as always, I wished there were more people out to see this extraordinary band.

I showed up a couple songs into Jackie’s set. The Bellingham band have gained a solid following over the last couple of years and, musically, were a pretty perfect fit as the opener for Howlin Rain. Their set had some great musical moments, however their on-stage energy was missing something tonight. I look forward to seeing them again live.

Following the Jackie set, Howlin Rain took the stage. The band, fronted by Ethan Miller (who is also a member of Heron Oblivion and Feral Ohms, and formerly in the seminal Comets on Fire), spent the next hour showcasing (or road testing) songs off their upcoming new release, which is half recorded. The new batch of tunes were more subdued than previous ones, with guitarist Dan Cervantes handling more solos than before as well. The songs themselves were pretty fantastic – like the Grateful Dead with more fire behind it – but personally, I was longing for the bombastic solos that Ethan Miller is known for. In all the years I’ve followed music, I’ve never seen or heard anyone who plays the guitar the way Ethan does; his combination of joy and intensity, especially in his solos, is one of the most incredible things I’ve ever experienced. He plays with pure perfection – solos that flow with incredible beauty, style, grace, intensity and passion. So, without it… welp, I missed that being part of the show – almost like I missed an old friend who I thought was coming to town. The songs were still brilliant, as to be expected with Howlin Rain… and on the final song of the set, Ethan did finally really let loose – but I’d gone into the night looking forward to the solos in nearly all of the songs… so while it was still an incredible night and the band was incredible, I left a little disappointed.

It’s a weird feeling to close out a show at on one hand, be ecstatic from the brilliance you’ve seen and on the other, wishing I could’ve seen a different kind of brilliance. But… that’s how it shook out this December evening. Another great Bellingham show in the books.

I can’t think of a better way to have celebrated my birthday than at The Shakedown, drinking and dancing with friends to the music of a few favorite local bands.

Them Folkes warmed up the crowd with the formidable task of opening for two powerful mainline acts. Even though there wasn’t much moving going on amongst the crowd, fans cheered and whistled for more of their hardcore post-rock tunes.

The song “Chugger,” was a crowd-pleaser. The metallic tonality from guitarist Heath Frazier and bassist Jeff DenAdel adds a progressive element to their sound and is reminiscent of bands such as Rise Against and Russian Circles.

Drummer David Hall uses hard hitting beats, similar to Jeff Nelson (Minor Threat), keeping the song grounded and limiting its more dissonant sounds. Hall maintains a pop sensibility by breaking the intro with a slamming fill as a transition, allowing for the main riff to come in effortlessly. The song ends with a heavy, groove-oriented section that includes fuzzy guitar riffs, a moody bass solo and a head banging drum section.

Next up was LipStitch. As always, they played an astonishing set and have become fan favorites with regular bookings at The Shakedown. This was their second show in less than a month and they are already scheduled to play with No Guts and Skates! on Jan. 4 (do not miss this).

With the highly anticipated release of their forthcoming full-length album, Who’s Left and Who’s Leaving, instead of forcing themselves to release a bunch of singles to hype up fans, the band is playing it smart by working out these songs in a live setting. This way, if people really want to hear what is to come, they’ll have to see them on stage.

Songs “Tough Year” and “Best of Us,” off of their EP, The Jett Sessions, have remained as fresh as when they were first released. Their new material “Mid-thought” and “Dang” are great predicters for the sound of their new record, as well as their first single “Holding On,” which was featured on KNDD before the new year.

Perhaps this is biased, but the highlight of their set was when they had the entire crowd sing “Happy Birthday” to me. This was truly a sweet moment as both the band and I have shared some memorable times at the Shakedown.

Finally, Actionesse made their return to Bellingham after having a spectacular year. With the release of their debut LP, The Deep, Bright Below and a stupefying performance at Capitol Hill Block Party, the band have been recognized by both Seattle Times and The Stranger as a crucial piece of Seattle’s remerging rock scene.

Despite having relocated their self-defined “post-horncore” sound to the Emerald City, Actionesse haven’t forgotten that Bellingham is where it all started. Their mighty tones and lightning speed notes created a frenzy mosh pit that left listeners in a pool of sweat and their bodies covered in bruises.

The set included some of the best live versions of both “Useless” and “Movement Dark” that I have ever heard. During “Movement Dark,” saxophonist Lulu Belle jumped into the pit where fans, including me, danced with her. She uses hypnotic dance moves and a malevolent sax sound that leaves the audience in a trance.

With what was a seemingly deliberate choice, they closed out their set with my personal favorite “Shark Hunting.” Guitarist Ian Reed made this one particularly special with a blistering, improvised solo and ending the song by jumping onto the monitors and screaming the lyrics directly into my face as I returned the gesture.

While Actionesse have played their final show of 2019, you can still get a ticket to see them perform at Timber Festival in Leavenworth on July 16, 2020. Follow them at actionesse.com for future updates.