No Guts: Evolving with age 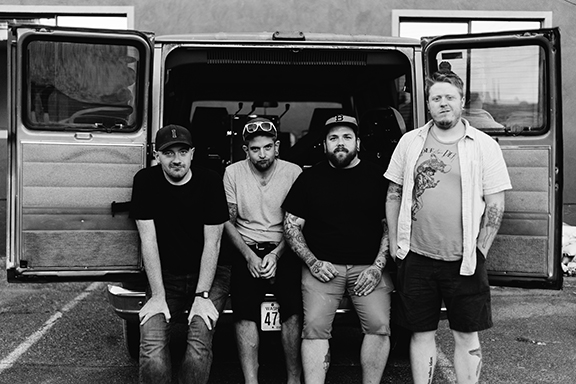 Starting as a three-piece pop punk band in 2011, the members of No Guts have seen Bellingham change with the decade. In their 2019 record, 4033, they reflect on how they, too, have changed and grown since the party-fueled era of their early 20s when they began.

The album title is named after the address of the Wisco, or ‘the Lil Wisconsin,’ which was the band’s primary venue when they first began. The former house show location is now a Costco parking lot,explained No Guts’ singer and lead guitarist Andy Beer.

“Our band hosted shows a few times a month,” Beer said. “It was remote enough that we were never interrupted by cops or bad seeds looking to crash a house party.  We had an amazing group of people coming and going from the Wisco shows. We were fully of the opinion that, aside from the terrible state of the house, the Wisco was a purely positive contribution to the scene. Years later, after the party ended, we started seeing the negative side effects caused by the habits and expectations set from the Wisco environment.”

The latest album, Beer said, is a cyclical story of the joy and exhaustion of their former party lifestyle. It has transitioned away from their pop punk roots to alternative rock.

“4033 is a reflection on the impact of our hard partying 20s,” Beer said. “It is hoped to remind us that we aren’t alone in the mistakes we make, we have support; but there are consequences and a cost to the lifestyle. 4033 is also a record dedicated to survivors, especially those we’ve met personally.”

A large piece of the band’s growth and development came from their change of band name, and the reflection of their presence in the Bellingham music community.  During its three-member iteration, the band was called Girl Guts, and changed their name to No Guts in 2016, while welcoming back Justin Taylor, bassist and former bandmate of the crew in their prior band, Here’s Johnny.  They used the new band name and lineup as an opportunity to change their sound, and began writing 4033 while retiring many of their older songs. The album was recorded in April 2018, and released last month.

“As 20-something party monsters, we hadn’t fully grasped the potential damage of that name when we chose it, harmless as it was to us,” Beer said. “A few years ago, a concerned individual sent us a message of disapproval. They weren’t in our circle and didn’t have the same knowledge of our intentions with the name. That made it apparent that we were out of our depth and however hard we tried to use the old name as a standard of support, there was potential for harm,” he said. “We listened, reflected and agreed. It was time to change it up. For all the healing we hoped to provide through our music and general acceptance of anyone who came into a Girl Guts show, we can also say we left some destruction in our wake out of honest ignorance.”

Beer explained how he is thankful for the shift in accountability in the music industry in recent years.  What it has taught the band, he said, is to “be better than your heroes.”

“That means being mindful of your message, accountable for your actions and accepting of others’ perspectives,” Beer said.

For the past three years, No Guts has focused inward, putting time into writing and recording instead of booking shows.  With the release of their latest album, the band is eager to start playing shows again, he added.

In the days of performing at the Wisco, No Guts played with many local legends of the time, including Palisades, City Hall, Bowl Cut, The Mark, Totalizer and Candysound.  They worked with the late Robby Cleary to bring former Black Flag singer, Ron Reyes, and his band, Piggy, to Bellingham.

No Guts is currently made up of Andrew Wild and Andy Beer on guitar and vocals, Justin Taylor on bass and vocals, and Ryan Baily on drums. The band initially formed when Wild, Taylor and Baily moved to Bellingham from Wisconsin in their pop punk band, Here’s Johnny, a year prior.  Beer had moved to Bellingham in 2008, and worked with Wild in a T-Mobile call center, where he was recruited to play bass for Here’s Johnny. After several weeks, following the temporary exit of Taylor, they became the first iteration of No Guts.

Now in their 30s, the band continues to grow as individuals and in their sound, and are incredibly thankful for the reintroduction of Taylor to their crew, Beer said, describing him as a “powerhouse of musical opportunity for the band.”

“Punk changed (not for the first time), we changed, the house disappeared, the fans got older, and that was that,” Beer said.  “Bellingham, as a college town, allows a very healthy four-year lifespan for any band that wants to try, and we’re now going on nine. We’ve made some amazing friends, a few enemies, and we just try to keep it honest these days.  There is a whole wave of new bands deserving of recognition (Cop Talk and Beautiful Freaks, to name a few).  We’d love to play with them,” he said.

To listen to No Guts’ newest record, 4033, visit noguts.bandcamp.com, or find them on streaming platforms. For band updates and show dates, follow them on Facebook or Instagram @nogutsband.