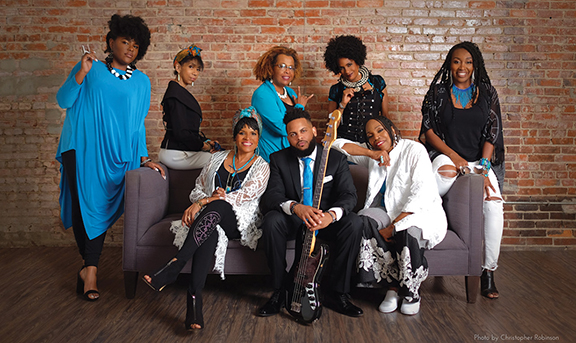 photo by Christopher RobinsonWhen you think of all time best gospel groups, the Blind Boys of Alabama and The Staple Singers come to mind. Washington DC’s Sweet Honey in the Rock also tops this list, having shared their gospel and world music while fighting social injustice and singing to children, with their absolutely blessed, beautiful, divine sounds. The band started in 1973 when Bernice Johnson Reagen was part of the Black Repertory Company and giving vocal lessons. As she assembled the group, with Louise Robinson and Carol Maillard, they began going through gospel numbers, and as they sang “Sweet Honey in the Rock” – based on Psalm 81:16 – the group clicked. They had a group, and a name. Over the years, Sweet Honey in the Rock have recorded 24 albums, several made for children. They have served as “international ambassadors of a cappella vocal and lyrical excellence and musical missionaries of equality, empowerment and education, peace, love, solidarity and nondenominational spirituality,” according to their website. A highlight of the band’s career was their album, SWEET HONEY IN THE ROCK: A Tribute…Live! Jazz at Lincoln Center(2012) that included songs written by “vocalists and activists Abbey Lincoln, Odetta, Miriam Makemba and Nina Simone,” stated their website. It also included the Honey Men: Stacey Wade as pianist and musical director, electric bassist Parker McAllister, and drummer, percussionist Jovol Bell. The group also won two grammys for best children’s album, 2000’sStill the Same Meand 2008’s Experience 101. Currently, the group consists of founding members Carol Maillard and Louise Robinson, as well as Nitaji Bolade Casel and Aisha Kahlil, with Romeir Mendez on electric and upright acoustic bass. Touring members include Christie Dashiell, Barbara Hunt and Rochelle Rice. Since 1981, they’ve also included Shirley Childress as the sign language interpreter, being one of the pioneering groups in bringing on someone to sign the words of the music. Sweet Honey has had over 20 different members during its time, which will give a band the obvious push and pull of their sound, but have maintained true to their roots throughout. Rooted in gospel singing spirituals and hymns of the African American church, they also focus on society and challenges. Subjects include “motherhood, spirituality, freedom, civil rights, domestic violence, immigration issues, and racism,” according to an article in the Washington Examiner, as well as confronting “police shootings, the Charleston church shooting and the environment.”

Catch Sweet Honey in the Rock on Friday, Jan. 17 at the Mount Baker Theatre. Follow the group on social media for updates.