Tales from the Road: Bird & Shooter 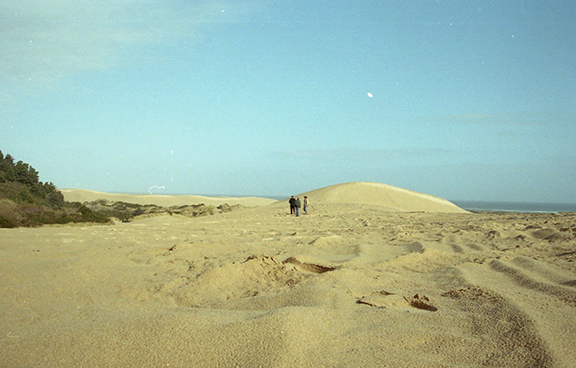 This last November we, Bird and Shooter, went on our first tour. Much like most band’s on their first tour we set out having high hopes and were met with a humble dose of reality. Initially there was a lot more of an ambitious approach. We were thinking we could set out for a month and go as far as Arizona, Nevada, or Montana. We found that without ample time to set up shows we couldn’t really make this happen. Next we thought of taking two weeks, even on short notice if we grinded we could make it happen right? Wrong. As time kept ticking and we struggled to fill in some big gaps in our tour schedule. Nevertheless we finally had enough shows to make a two week trip work although we would have a couple of days to kill time. Unfortunately for us several shows got cancelled last minute and had to cut it down to just a short and sweet one week mini tour. After 6 months of sending emails to countless bands, venues, and promoters along the west coast our hopes of taking a month long trip down the coast, escaping the northwestern winter and catching a new wind of motivation turned into a week long road trip of binge drinking, drugs and sleeping in the cold that left us feeling more deflated than ever.

We started the tour off in Seattle with a live in studio session at Seattle U’s KXSU. Spirits were high, we had set out to do something and were taking the first steps into achieving our goal. The show was great, lots of new faces, we played great, made some gas money. What more could you ask for to kick off a tour? Immediately after we drove to our second show in West Seattle where we played easily the grimiest house we’ve ever been to. Dishes to the ceiling, bathroom looked like a murder scene, trash everywhere; A typical house show venue. The bill was filled with hardcore bands and we closed out the night with our usual polyrythmic gentle jazz rock. As you can imagine, it wasn’t received well and almost wasn’t received at all aside from the tiny litter of enthusiastic drunkards and a few rats. We got the full spectrum that night. Although we didn’t really seem to fit in the host were nice enough to let us stay at their house.

The second night we played the Green House in Portland. Easily the classiest house show venue we’ve ever been to. The fellas in Tom Ghouli and Bathrobe alongside their Honorary roommate from Boyband welcomed us with open arms. After a great set from the opening band we played to a packed basement of Portlanders who seemed to appreciate our jams. Next our new friends from Boscow Mujo played a fantastic set and No Nuckle finished out the night.

The next day we frollicted through Portland, exploring the outside of abandoned buildings and spending far too much time in a local antique store.

We set up camp in the Umpqua Dune that night. After spending the day exploring various abandonments filled with rat turds and creepy dolls we pulled up to a very dreary fog hanging over the dunes. The nearing lighthouse piercing through the fog and rolled beams of light over the dunes providing a very ominous setting for us as we spent the night drinking and listening to Aphex Twin as Chandler and Nate delved into dark tales of serial killers and ghost stories.

By the time we got to Eugene we were already feeling a little fatigued. After spending a few hours in the city filled with crust punks and homeless people screaming profanity at teenagers, we played to a nearly empty bar (it was a Sunday). The bill was the first show of the tour that felt like our music fit. Laundry and Spiller brought some classic Eugene material. After the show we walked to the other end of town where a friendly bartender invited us in after he closed the bar down. We continued to drink there until about 4am after Nate had found some comfort and rest on the bar floor.

After getting a pretty late start we headed for the Redwoods not knowing that not only would most campsites in the redwoods be closed for winter but that it was also about 40 degrees outside in that area. Would we ever find a place to sleep? Taking detours down winding roads with collapsed mountainside jutting into our lane left us feeling like were stranded. After setting up camp in a small town outside the Redwoods we began our tradition of getting liquored up to keep warm. This time instead of sharing ghost stories with each other we opted for screaming drunken profanities and unloading built up tension from being in the van with each other for the last four days. Needless to say; By the time we got to San Francisco we were on our last leg of the tour in more ways than one.

For most of us it was our first time visiting San Francisco and it did not disappoint. Why is San Francisco the most expensive city in the U.S? Because its really fucking cool guys. That’s why.

We had the best Mexican food we ever had. We smoked a joint and got lost in golden gate park and played the best show of the tour at The Knockout. The bands were unbelievably nice and we finally played for a crowd who appreciated our music for what it was. Unfortunately we were too poor to sleep in the city so we decided to park on the other end of the Golden Gate Bridge and drink in our van until all of us passed out. The next morning we woke up and decided to grind our way back to Bellingham; one continuous 16 hour drive.

One of the hardest lessons to learn when becoming a new touring band is that things are not going to go the way you planned. As all of us boys in Bird and Shooter embarked on our first trip down the west coast we were continually reminded  this harsh truth.