X Suns: The space to rock 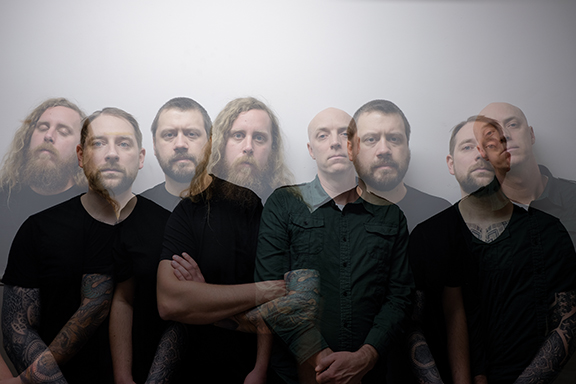 Seattle’s X Suns (10 Suns) play punishing instrumental space rock – mixing metal, post rock, space rock and everything in between, creating a sonic hybrid that has been amazing music fans for over a decade. And though they’ve been playing for years, in some ways it feels as if the band are just getting their footing.

The band started in 2009 and over the first five years went through a series of line-up changes that would start and stop the band, changing their sound and dynamic, often times stifling their momentum. “Our sound definitely changed many times in those early years, and the dynamic as well. Which is to be expected with having different guitar players, with different influences,” said Trent McIntyre, drummer. “All the changes early on were tough, because it seemed like we were always getting set back just when we were gaining momentum. We spent a lot of time teaching songs to a new guitarist, playing a bunch of shows with them, writing new stuff with them, and then have to find a replacement for them right after recording, or something.”

Since 2014, they’ve had the same line up with Slippy King and Jared Burke Eglington on guitar, Adam Tricoli on bass, and McIntyre on drums. This has allowed them to really grow as a band.

“Songwriting style has stayed pretty consistent over the years, and usually consists of either Burke or Skippy bringing a riff (or more) to practice, and then we all just jam on it until we flesh out more parts,” he said. “When it works well, the song can write itself in a few practices. It’s mainly all about those happy accidents, and working through stuff until someone does something cool that we all like.”

While the band opts for the description of instrumental space rock, their sound is much deeper than that. “I like to think that we fit within the Post-Rock and Math Rock scenes,” McIntyre said, adding, “Or at least we try, haha. Sometimes people say we are Post-Metal, and we have played with a lot of metal bands too.”

He added when X Suns got together, they were inspired by bands such as Mogwai and Explosions in the Sky (both instrumental bands) as well as Junior and Constants (both featured singers).

“There was definitely an intent to play this style of music when we first started,” McIntyre said. “I really wanted to start an instrumental band, because I was a bit tired of singers at the time.”

McIntyre added X Suns misses a lot of touring windows because they enjoy opening for other bands. “Most of the reason we play locally too much is that I always try to help touring bands as much as possible when they come through town, which means we usually end up playing too many local shows during the busy seasons. It’s hard saying no sometimes when so many killer bands come through town,” he said. “We have been better about balancing everything lately though.”

Coming up, X Suns are wrapping up writing their debut full length, which they plan on recording in the spring as well as more tours. “Our big goal is to tour in Europe,” McIntyre said, “but that might have to wait until 2021. We will see though. We definitely just want to keep pushing and doing as much as we can.”

FOR MORE: See X Suns perform Jan. 31 at The Firefly. For more information and updates, follow their social media.