C.W. Stoneking: The sound becomes him 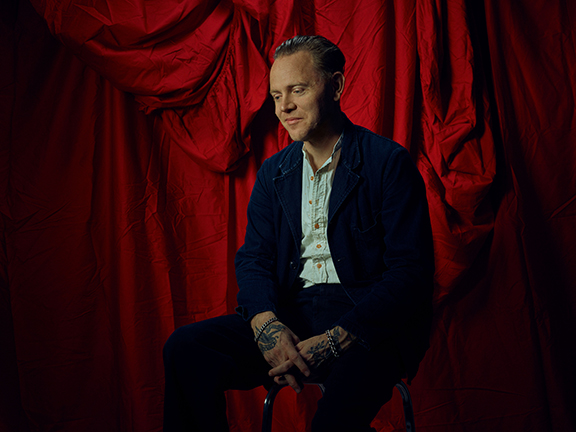 C.W. Stoneking makes a stunning circus of genres. He mixes and matches rhythms and styles in a way that sounds classic. He stands on stage like the ringleader of a ghostly sound that you’ve never heard but is somehow familiar. Old timey, and brand new. The man’s a legend who calls himself King Hokum.

Stoneking has a deep voice, dripping in intrigue, with a bit of a slur like he’s been chewing on something important. It’s one of those old storytelling voices, the kind that sets a mood. He sings like that, too.

At times his sound is as simple as a few strings buzzing. Then he comes at you with that second line, brass and drums marching in a joyful jazz funeral procession. All of a sudden he sounds like some crooning parlor boy singing to his sweetheart at the county fair. Around and around on this ferris wheel of sound.

He hails from the timeless stone and sand deserts of the Australian outback, but his music is undeniably infused with the humid blues of the American South. How Stoneking mastered that southern blues sound is a story.

Born in Australia some 45 years ago, most of his childhood was spent in Papunya, a small indigenous community in the Northern Territory. The sand there was a vivid red and the mountains were big and twisted. Millenia of erosion and wear, and he grew up in what remained. He was young when he played in the red sand, and started messing around with his mom’s guitar and listening to his father’s record collection.

“I first started playing skip to my lou and I thought it was hard and my fingers hurt,” Stoneking recalled. “My dad had a real big record collection so he was always playing music in the house. It was a real eclectic mix of stuff.”

He added, “When I used to listen to Charlie Patton or the voice of Son House… the sort of visual cues in my head, what it conjured, was more like what I knew. When I saw the (Mississippi) delta, it wasn’t old to me. It was like a jungle, probably flooded half the time and it’s all been drained out, and there’s roads.”

Perhaps the landscape made all the old tunes sound new. Perhaps the juxtaposition of sound and scenery inspired him to keep inventing, to keep the music evolving, to keep wearing down the edges and adding new ingredients.

Stoneking said it wasn’t until his 20s when he really got into music. “I started playing with a band for awhile, we were playing old blues, and I was familiar with it cause I’d listened to it but I never really thought about only playing that.”

He performed at small venues and on street corners for at least a decade before making his first record, King Hokum.

“That was my little thing. I started calling myself the King of Hokum,” Stoneking said. “I just put it on a poster one day, a long time ago.”

Hokum is a kind of blues from the 30s – northern blues, a bit jazzy. It also means pretentious nonsense, according to the dictionary.

“The main thing is, hokum is like a double entendre,” Stoneking said. “You know. Sexy tunes dressed up as something else.”

His music does have a satirical bite. Tall tales of adventures in the Congo, zombies, and voodoo. The lyrics are equal parts fantasy, depth, and wit.

And King Hokum does have a stronger jazz sound than his later work. But somehow it’s less busy. Even when the band comes in with the brass, it maintains a certain casual charm. As if you’d just stumbled upon a mythical porch session somewhere in Louisiana.

“I tend to not want to dwell too long on one thing,” Stoneking said. “Maybe if I write a song and it sort of reminds me of a specific type of blues or maybe an artist or somebody, I don’t tend to try to do that more than once… Now I don’t really even think about it when I’m writing songs. I just experiment with the rhythm, chords and different things.”

His experiments have worked. Stoneking has won numerous independent music awards in Australia, appeared on Jack White’s album Boarding House Reach, and seems to be constantly on tour. In the past two years, he has been playing more solo shows.

“I just take one instrument and a bag,” he said.

He likes the freedom of it, and enjoys re-working his songs the way he re-invests genres.

“You know the record just stops in its tracks,” Stoneking said. “You’re always changing things, the way you play or sound, from day to day, certainly from year to year. (The record) becomes pretty obsolete to the artist pretty quick.”

He continued, “I don’t feel bad about being obsolete. You know people can still listen to it. They’re not me, you know. I hear other recordings and it’s cool. I just take it as that’s what the song is. But when I’ve got the song in me, and I can play it on the guitar any time I want, then the record version doesn’t really stand up in court for me, not for very long anyway.”

His latest record, Gon’ Boogaloo, stands out from the rest. Mainly for his use of an electric slide guitar, and it truly is remarkable how convincingly old it sounds despite the instrument.

Boogaloo is a style of Latin music that originated in New York in the 1960s. A fusion of mambo with R&B that doesn’t exactly describe the record’s sound, but flavors it, and alludes to his habit of combining different styles into something new but familiar.

Stoneking himself is a mixture of cultures and sound. Both of his parents are American.

“I never felt 100 percent Aussie when I lived there as a kid but I definitely don’t feel 100 percent American when I’m here in the states. So I got a little bit of both I guess,” Stoneking said.

“The Zombie,” a track on Gon’ Boogaloo, has a haunting spooky vibe that’s all fun and doo-wop. It takes place somewhere in the jungles of Africa. Stoneking has yet to visit  Africa, but he has faced zombies.

“I was coming out of a joint one time in Bristol, in England,” Stoneking said. “I used to have a place there where I went to write songs. I guess it was an old bomb shelter or something. It was like underground, and I was working there one night. I roll out in the afternoon. And there are zombies everywhere! In the park and coming up the street. I guess it was one of those zombie walk things. But I didn’t know. There was just zombies everywhere.”

For King Hokum, that kind of foolery might seem mundane. His music conjures that kind of feeling, a mythical world where one might tango with a zombie; where the king of nonsense comes from down under to sing for us.

C.W. Stoneking is playing the YWCA on Saturday, Feb. 8. Doors open at 7 p.m. The Shadies and Hot Damn Scandal also perform, with vintage dance performance by B’ham Hop. Tickets are $25 at cwstoneking.brownpapertickets.com. The show is produced by Pace Rubadeau.