Her Crooked Heart: To love what we do 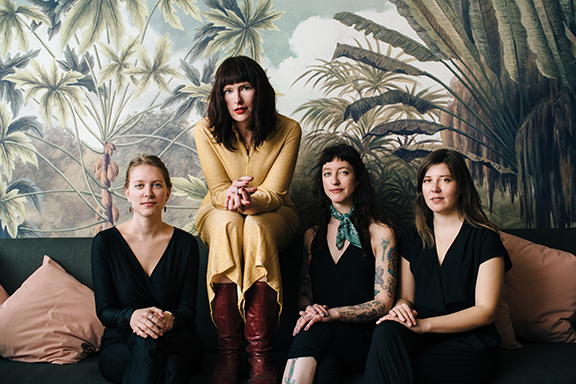 Over the course of a decade, Rachel Ries had made a name for herself through her music. Starting as a solo act with her 2005 debut album, For You Only, her music delved into topics of self reflection and personal experiences, using an acoustic guitar and her vocals.  As her career developed, Ries began playing with a full band and a wide range of musicians and instruments, but something felt incomplete. She needed a new name for her project aside from her own, one that better encapsulated what she was trying to convey in her music.

In 2016, right as her new EP was about to be released, Ries had an epiphany. Her recordings for Cardinal were at the manufacturing plant, going into production, when she found a new project name. Despite her fears of losing fan recognition, of all of the work involved with rebranding her entire musical career, she called and paused the vinyl pressing and made the change.

Her Crooked Heart, the new name of her project, introduced three new musicians to the lineup. Ries remains the writer, multi-instrumentalist and producer, but now has the help of Siri Undlin, Adelyn Strei and Hilary James, all of whom are in their own projects in the Minneapolis music scene. The quartet loops beautifully executed harmonies and a wide range of instruments while retaining the soft, intentional lyricism of Ries’ past work. They have released three full-length albums, including their latest record, To Love to Leave to Live.

“The past year of touring this album with them has been hands down the most gratifying, glorious, hilarious, comforting, satisfying stretch of music making I’ve ever had,” Ries said. “I love these women so much. The three of them have their own bands and projects, trajectories and visions, and I love that. There’s no passive role going on, and they all know how much it takes to put on a tour and cover all the bills and figure it all out.”

Her Crooked Heart, and specifically the new album, is incredibly hard to define within a single genre. To Love to Leave to Live fuses piano ballads, folk-rock anthems, woodwinds, strings, drum triggers and tender lyricism into something entirely unique yet relatable.

Ries grew up surrounded by music, and was formally trained at singing and playing instruments. This simultaneously made her want to rebel from the norm and gave her the technical mastery to do so.

“When I was quite little my family lived in Africa, so music and dance and expression were part of everyday life in Zaire, where we were living,” Ries said. “Music was integral to all expression from my earliest memory. When we came to the states when I was four, I got plopped in the prairie of South Dakota (very sexy). In this very small Mennonite community in the plains, it was all about the church. My community growing up was very artistic for being a small town of a bunch of farmers. Lots of theater productions, really robust arts programming at the little high school I went to. For me, it was hymnal, high harmony stuff in the church, but also classical violin lessons, piano, clarinet, viola and honors choir.”

In recent years, Her Crooked Heart has used music as a tool to uplift small town communities, which in part stems from Ries’ own upbringing and desire to give back.

“We’ve been doing these artist residencies, where we get to go to a rural community that’s underserved in terms of the arts,” Ries said. “We go to these tiny towns out in the country for a week at a time and and do creative writing exercises with really hurting, at-risk teens experiencing poverty, drug use, etc. Students who need a lot of love and need a positive outlet for what they’re experiencing.”

They have received a grant from the Minnesota State Arts Board that will extend into next year to continue their work.

“It’s about sharing those moments with these bandmates, these women, having real and immediate and present musical human connections with people, and not in a stage way.  Where we aren’t ‘the other,’ but are just there with people using music as the means of connecting.”

In addition to Her Crooked Heart, Ries is the director of a 70-person rock ‘n’ roll choir in Minneapolis.

“This is a time where I value both sides of myself, and am trying to figure out how to balance the two (projects) while also writing and expressing myself, and feel like it’s worth doing. There are so many people making music, is my voice needed? I don’t know! I’m going to keep poking at that question and deciding every day, and we’ll see. I just want to love what I do.”

Her Crooked Heart is playing at The Firefly Lounge on Feb. 9 to conclude their West Coast tour. For ticket information, tour dates and band updates, find them on Facebook at rachelriesmusic, and follow them on Instagram at hercrookedheart. To check out Ries’ choir project, visit kithandkinchorus.com.